It feels strange to observe Presidents’ Day with Donald Trump as president—he has already tarnished the office so drastically that it feels shameful to compare him to Barack Obama, much less George Washington. The literary world has been more or less unified against this president, and—alongside the press, the public, the music world, the art world, and pretty much anybody with any kind of soul rattling around in their chest—has been debating him on various levels and stages ever since he announced his candidacy. But of course, Trump never debates back—at least not coherently, and not outside of Twitter. This Presidents’ Day, I think the republic could use some back and forth between our “president” and some of our real intellectual and cultural leaders, in particular, those below, who would challenge him constructively on a number of important issues. (In the grand tradition of Teddy Roosevelt and Mark Twain, maybe?) And hey, if they never actually meet face-to-face? That’s fine—just consider these ten writers your own personal set of antidotes to Trumpism.

Masha Gessen on Civil Rights
Of all our public literary intellectuals, Masha Gessen is the one who really knows best what this presidency could become—after all, she has already had to flee Russia in order to ensure the safety of her family. Also she’s deeply brilliant on a wide breadth of topics from civil rights to abuses of power to artistic freedom to terrorism—although, next to Donald Trump, at least when it comes to issues of policy and governance, so is my right elbow.

Chimamanda Ngozi Adichie on Feminism
With We Should All Be Feminists, Adichie has become a touchstone for many contemporary conversations about feminism, and while a number of writers could engage Trump on the subject, she would surely be one of the most fun to watch. Just look at how well she handled the wheedling, whining editor of The American Spectator on the BBC—I’d hope that, if she debated Trump, we’d get at least one reprise of that epic eye-roll.

Naomi Klein on Climate Change
Klein is one of the leading writers and activists specializing in climate change, and particularly in the effect that capitalism has on climate change. She’s also a fairly polarizing (no pun intended) figure, who can school Trump on more things than just what’s happening to the environment.

Khaled Hosseini on the Refugee Crisis
Perhaps Trump would be cowed by a face-to-face meeting with such an intelligent, generous, and incisive writer as Hosseini—this even ignoring the fact that he was a refugee and, hey, is now an American citizen whose novels have sold millions of copies and definitely enhanced the lives of many of their readers. Hosseini is a goodwill envoy to the United Nations Refugee Agency, and has written about the Syrian refugee crisis—he has the facts and the chops to discuss this with Trump, and maybe some of his many fans would sit up and take notice.

Margaret Atwood on Bioethics
Listen: I’ve seen Margaret Atwood steamroll the hell out of a discussion—and that was when she was on a panel with three other brilliant writers, all of whom actually agreed with her. That’s fine by me, though, considering the fact that our reality keeps looking more and more like the dystopic futures she’s been imagining for years. Probably we should all shut up and listen to what she has to say. One person, in particular, should start listening.

Eileen Myles on Political Correctness
After all, in 1992, Eileen Myles ran for president, her candidacy inspired by this exact issue—as it came from the mouth of George H.W. Bush during a commencement speech at the University of Michigan. “Anybody who was complaining more than once about their lot in America was a danger to freedom of speech. They were taking too much, taking too much airtime, saying too much. And by that he meant activists, minorities, women, people of color, queers, you know, everybody who he didn’t want to hear from more than once,” Myles said. Plus, she explained, Bush really stole the term “politically correct” from the lesbians. I wonder what Trump would have to say about that.

Ta-Nehisi Coates on Racism
Coates is brilliant, and often brash, and an expert on President Obama, but the thing that would make him truly ideal to debate Trump is that he seems to be skeptical of pretty much everyone—he’s no acolyte—and he considers policies in 360 degrees, like an historian, with regard to both past and future. Trump would be way out of his depth.

George Saunders on Empathy
Saunders has thought deeply about the Trump phenomenon, and is the author of the latest and greatest Presidential novel, so he has some credit on the debate stage. But it’s not his political credentials that make me think he’d be a good match for Trump—it’s his new role as our Captain of Kindness. After all, vitriol is not always the way, and more and more, it seems that facts aren’t the way either. So why not just send literature’s moral center to debate Trump? Maybe—just maybe—he could weaponize some of his “radical tenderness” and, essentially, charm Trump into being less of an asshole.

Maggie Nelson on LGTBQ Rights
Nelson is one of the most incredible writers and radical thinkers I’ve ever come across—Bluets is a desert island book (despite its brevity, which is saying something)—and is also an important cultural theorist, as evidenced by, among other things, her recent “autotheoretical” The Argonauts, which investigates the many facets of desire, identity, and what a family is—or can be. I think she would reduce Trump to a stammering mess.

Ottessa Moshfegh on the Nature of Reality
Moshfegh is an expert in ugliness: completely unafraid of it, and in fact fascinated by it, constantly reveling in it, and adept at pointing it out in others. Also, she tends to be somewhat outrageous in conversation—or at least in interviews. I just wonder what kind of truths she might let slip when faced with Trump.

Behind the Dedications: Hunter S. Thompson 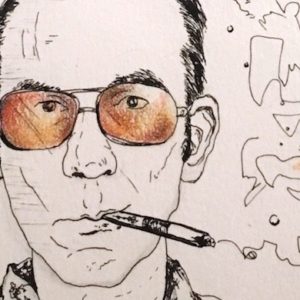 Behind the Dedications: Hunter S. Thompson

On February 16, 2005, Hunter S. Thompson was sitting in his home in Woody Creek, Colorado. Football season had just ended,...
© LitHub
Back to top