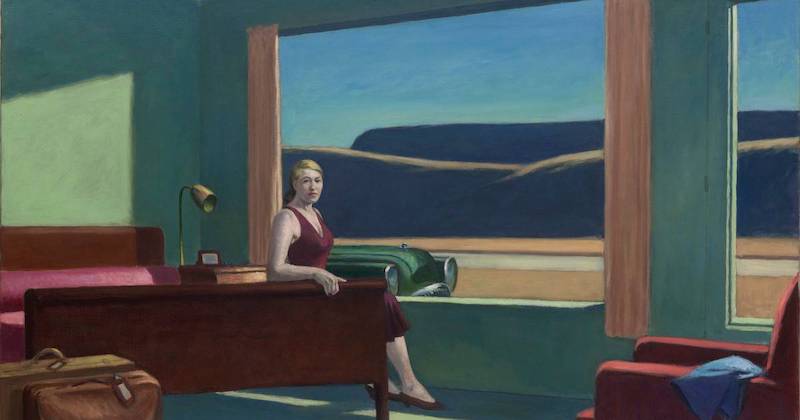 As a result of the spread of COVID-19, every responsible person in this country (and honestly, in the world) should be practicing serious social distancing right now. It’s not easy, of course—but it’s a little easier when you know you aren’t alone. If you need a little extra inspiration (or just a balm for your separated soul), here are some very good social distancers from literature (at least in the moments below). And this list also doubles as a pretty good quarantine reading list, if you ask me. Take notes, Spring Breakers. (Seriously, please take notes.)

October 9, 2001—All the lonely people indeed. Whoever they are, I’ve never been one of them. The lack of other people is a balm. It’s the absence of strain and stress. I understand monks and hermits, anyone who takes a vow of silence or lives in a far-flung cave. And I thought—hoped, rather—that I would live this way for the rest of my life, whatever time is left to me.

I long ago abandoned myself to a blind lust for the written word. Literature is my sandbox. In it I play, build my forts and castles, spend glorious time. It is the world outside that box that gives me trouble. I have adapted tamely, though not conventionally, to this visible world so I can retreat without much inconvenience into my inner world of books. Transmuting this sandy metaphor, if literature is my sandbox, then the real world is my hourglass—an hourglass that drains grain by grain. Literature gives me life, and life kills me.

Money Breton, of Mary Robison’s Why Did I Ever:

Hollis and I have killed this whole Saturday together. We’ve watched all fourteen hours of the PBS series The Civil War. Now that it’s over he turns to me and says, “That was good.”

I end up at Appletree—the grocery—in the dead of the night. I’m not going to last long shopping, though, because this song was bad enough when what’s-her-name sang it. And who are all these people at four A.M.? I’m making a new rule. No one is to touch me. Unless and until I feel different about things. Then, I’ll call off the rule.

I care for myself. The more solitary, the more friendless, the more unsustained I am, the more I will respect myself.

The narrator of Ottesa Moshfegh’s My Year of Rest and Relaxation:

I spent that first week in a soft twilight zone. I didn’t leave the apartment at all, not even for coffee. I kept a jar of macadamia nuts by the bed, ate a few whenever I rose to the surface, sucked a bottle of Poland Spring, gravitated to the toilet maybe once a day.

Henry David Thoreau, of his own Walden:

I find it wholesome to be alone the greater part of the time. To be in company, even with the best, is soon wearisome and dissipating. I love to be alone. I never found the companion that was so companionable as solitude. We are for the most part more lonely when we go abroad among men than when we stay in our chambers. . . .

Society is commonly too cheap. We meet at very short intervals, not having had time to acquire any new value for each other. We meet at meals three times a day, and give each other a new taste of that old musty cheese that we are. We have had to agree on a certain set of rules, called etiquette and politeness, to make this frequent meeting tolerable and that we need not come to open war. We meet at the post-office, and at the sociable, and about the fireside every night; we live thick and are in each other’s way, and stumble over one another, and I think that we thus lose some respect for one another. Certainly less frequency would suffice for all important and hearty communications. Consider the girls in a factory — never alone, hardly in their dreams. It would be better if there were but one inhabitant to a square mile, as where I live. The value of a man is not in his skin, that we should touch him.

Mrs. Ramsay, of Virginia Woolf’s To the Lighthouse:

For now she need not think about anybody. She could be herself, by herself. And that was what now she often felt the need of—to think; well, not even to think. To be silent; to be alone. All the being and the doing, expansive, glittering, vocal, evaporated; and one shrunk, with a sense of solemnity, to being oneself, a wedge-shaped core of darkness, something invisible to others. Although she continued to knit, and sat upright, it was thus that she felt herself; and this self having shed its attachments was free for the strangest adventures. When life sank down for a moment, the range of experience seemed limitless.

I walked on and on. Yes, even without the chamber music and the friend. how foolish to wear oneself  out in vain longing for warmth! Solitude is independence It had been my wish and with the years I had attained it. It was cold. Oh, cold enough! But it was also still, wonderfully still and vast like the cold stillness of space in which the stars revolve.

Captain Nemo, from Jules Verne’s 20,000 Leagues Under the Sea:

I am not what you call a civilized man! I have done with society entirely, for reasons which I alone have the right of appreciating. I do not, therefore, obey its laws, and I desire you never to allude to them before me again!

I am now quite cured of seeking pleasure in society, be it country or town. A sensible man ought to find sufficient company in himself.