Jessica Luther and Kavitha A. Davidson on the True Costs of Fandom

By Jessica Luther and Kavitha A. Davidson

You walk into the stadium. It’s Opening Day, and you’ve never seen the place look this good. The concourse is peppered with flags and statues of legends past; the concessions now feature gourmet food and craft beer; the bathrooms are actually clean. You find your seat and admire how everything looks brand-new.

And yet, you look around and know that this, somehow, isn’t right. It was too soon to say goodbye to your old home—and more importantly, it was too expensive to move into this new one.

Welcome to your shiny new stadium, which may or may not have been necessary to build but almost certainly was built unnecessarily with local tax dollars. This is the world of stadium subsidies, where suckers pay for billionaire owners to construct new dollhouses for their plaything sports teams so that they can pocket revenues from increased ticket prices, more luxury suites, high-end food options, and $15 beers. It’s a world where the ever-loyal fan overlooks a grand compromise made in exchange for the local team simply staying put.

One of the greatest American hustles is how a populace taught that we’re built on the ideals of freedom, democracy, and capitalism manages to willingly forego those ideals in the name of sports. We can become so enamored with the prospect of a retractable dome, or so frightened by the threat of relocation, that we allow the government to step in where it doesn’t necessarily belong and where it’s not needed.

“We’re privatizing the profits and socializing the costs and that’s never viable,” says Neil deMause, coauthor of the 1998 book Field of Schemes and editor of the blog of the same name.

And the thing is, you’re paying for every new stadium—not just the one in your city. From 2000 to 2014, the federal government lost $3.7 billion in revenue due to subsidies to sports teams building new stadiums, according to the Brookings Institution. These federal subsidies come in the form of tax-exempt municipal bonds. The federal tax exclusion for interest earned on state and local bonds dates back to the first US income tax established in 1913, when it applied to an array of private businesses. Since then, its application has been narrowed and specified several times, yet the financing of sports stadiums remains exempt.

In essence, all taxpayers are on the hook for subsidies whether or not they get to enjoy the stadium for which they partially paid.

In 1953, Milwaukee County Stadium became a game-changer—it was the first ballpark built entirely with public funding, and it was the first stadium project that actually enticed a team to move to a new city. Milwaukee began construction on the stadium in 1950 without a team to house in it, but the city offered free use of the park to any ballclub that would move there. Three weeks before Opening Day in 1953, the league approved the relocation of the Boston Braves to Milwaukee, beginning the era of teams entering new markets for free stadiums.

The Brooklyn Dodgers and New York Giants moving to California in 1958 accelerated this trend—but it wasn’t until the 1980s that the prospect of moving to another city with a publicly financed stadium became a viable strategy (some would say threat) used by teams looking for new facilities without paying for them themselves. In 1984, the Baltimore Colts moved to Indianapolis after Baltimore refused to pay for a new stadium, devastating a fan base and creating a prime example for other teams trying to squeeze dollars out of the local government.

According to the Georgia Law Review: “Before 1948, there were only twenty-eight professional sports stadiums and only four were built with a modest amount of government funds. Over the next half of the 20th century, American sports teams spent over $20 billion on stadiums for the four major American sports leagues of which, conservatively, taxpayers paid $14.727 billion.” By 1992, 77 percent of pro sports stadiums were funded at least in part by taxpayer dollars.

But even as the threat of leaving and the prospect of keeping a team loom large, the actual realized benefit of funding stadiums is questionable at best. A federal exemption highlights the uneven cost and benefit experienced by different parts of the country. In essence, all taxpayers are on the hook for subsidies whether or not they get to enjoy the stadium for which they partially paid. A new stadium in Las Vegas funded with tax-exempt municipal bonds will cost the same number of tax dollars from a resident of Wyoming as a resident of Nevada.

“Everybody in the United States is foregoing tax revenues that could have been earned on the taxable bonds that alternatively would have to be used,” Brad Humphreys, an economics professor at the University of West Virginia who specializes in stadium financing, says. “Everybody in the United States is providing some sort of subsidy for these private-use sports facilities.”

But the federal subsidy represents only a portion of the public cost that goes into new sports facilities. State and local governments must carry most of the burden of financing stadiums. This comes in the form of property tax exemptions to teams or the more direct route: straight out of citizens’ pockets in the form of increased general sales taxes, lotteries, and taxes on rental cars, hotels, restaurants, alcohol, and cigarettes.

Taxes on hotels and rental cars in particular are sold as a “tourist tax” to reassure locals that outsiders will bear the brunt of the cost. But the underlying unfairness remains: individual citizens are on the hook for a new arena whether or not they personally make use of it.

This dynamic is different from how it works with what might be described as the public good—education, infrastructure, health care—because sports are, essentially, a show. “Why do we subsidize one person’s entertainment and not another person’s?” Dr. Victor Matheson, a sports economist at College of the Holy Cross, asked, noting that citizens who aren’t film buffs don’t get tapped to finance new movie theaters. “When I’m sitting in the stands, I can’t argue with the fact that I’m having a good time,” he says. “As a sports fan, I’m not going to turn down a free ticket—and essentially, what these stadium subsidies are is a free ticket.”

Teams and leagues have perfected the art of exploiting this inherent fervor of sports fandom.

That free ticket to local sports fans pales in comparison to the season pass that subsidies represent for owners. As Matheson puts it: “The number one problem with stadium funding is essentially taxpayers and regular middle class taxpayers end up subsidizing salaries for millionaire players and profits for billionaire owners.” And therein lies the central dilemma: We tend to scoff at giving handouts to the wealthy, so why do we turn a blind eye when it comes to sports?

“The non-economic reason is this: The fans cannot live without these teams,” according to David Berri, an economics professor at Southern Utah University who specializes in sports economics. “I’m not a psychologist, but it seems to me like sports, politics, and religion all activate the same parts of the brain,” he surmises. “For a lot of people, this is their whole identity. It’s this external thing where I belong to something that’s bigger than me and it gives me my identity. And so for a lot of sports fans, their sports team is who they are. So if you take away their sports team, you literally take away their person.”

Teams and leagues have perfected the art of exploiting this inherent fervor of sports fandom, transforming fans’ loyalty and love for teams into the belief they can’t live without them no matter the cost. Teams cry poor, make outsized demands on local governments, pit cities against one another, and make empty threats to pack up and leave. While threats to relocate a team are largely unfounded, the heartbreak when it actually happens resonates for generations. The late New York Yankees owner George Steinbrenner for years lobbied for public assistance for a new stadium, threatening to leave the Bronx for Manhattan or even—gasp!—New Jersey.

But as New Yorkmagazine’s Allen Barra wrote in 1998, the owner was bluffing. “Steinbrenner’s greatest ally . . . is the ghost of Walter O’Malley, the late owner of the Brooklyn Dodgers, who moved his team to Los Angeles at the end of the 1957 season and who talked New York Giants owner Horace Stoneham into moving to San Francisco,” Barra wrote. “By raising the specter of the departed Dodgers and Giants, Steinbrenner is ignoring—or pretending to ignore—one important fact: Failing an earthquake that creates a new coast, there are no major markets left for Steinbrenner to move the Yankees to.”

Although a handful of professional teams in the major sports have switched cities in recent years, it’s a much more rare occurrence compared to 50 years ago, when many markets in the West were hungry for expansion. “That’s the creation myth of franchise relocations,” deMause says. “It ignores the fact that nobody’s going to invent California again.” 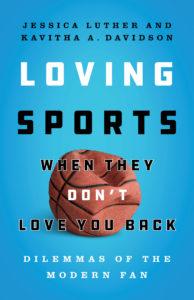 Excerpted from Loving Sports When They Don’t Love You Back: Dilemmas of the Modern Fan, by Jessica Luther and Kavitha A. Davidson. Used with permission from the University of Texas Press, © 2020.

Jessica Luther and Kavitha A. Davidson

Jessica Luther is a freelance journalist whose work has appeared in Sports Illustrated, ESPN The Magazine, the New York Times Magazine, Texas Monthly, Huffington Post, BuzzFeed, and Vice Sports, among others. She is the author of Unsportsmanlike Conduct: College Football and the Politics of Rape and has written extensively on the intersection of sports and violence off the field.

Kavitha A. Davidson is a sportswriter and host of The Lead, an in-depth daily sports news podcast produced by The Athletic. She is on the board of directors at the Yogi Berra Museum and Learning Center. She was a writer with ESPNW and ESPN The Magazine and a sports columnist at Bloomberg covering the intersections of sports and society, culture, politics, race, gender, and business. Her work has also appeared in NBC THINK, the Guardian, and Rolling Stone.

On Repetition As a Powerful
Literary Tool