“Your Mother Was a Fish” 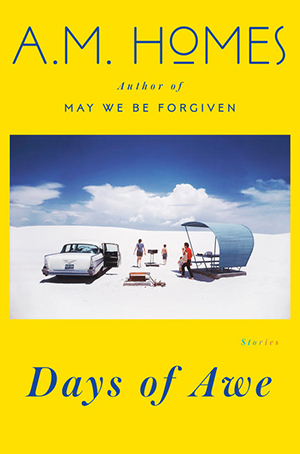 The following is from A.M. Homes's collection, Days of Awe. With a dark and comedic tone, these stories focus in on the strange anxieties of daily life. A.M. Homes is the author of several books, including This Will Save Your Life, May We Be Forgiven, and Things You Should Know.

À l’oeuvre on reconnaît l’artisan. You can tell an artist by his handiwork.

She is sewing a story, stitching a tale, line by line. This one is about her great grandmother who sewed herself a mermaid costume and swam to America. The journey was long, arduous and by the time she arrived at the state of Maine, her costume had fused to her flesh. She had a dressmaker split the center seam, separating her legs so she could walk, and she went through life with her legs covered in thick green scales, a brocade, fossilized by the sea into leathery chaps like a cowboy would wear. Men found her scales incredibly attractive; it was considered good luck to rub her thighs. They all wanted only one thing, to get into the space between the scales, the alligator purse that had been perfectly protected. The sweat of their palms stung her skin; she found them repulsive.

She moved to Massachusetts and took a part time job doing women’s work sewing tassles on loafers in a shoe factory.

Suck cock, suck cock, the sound of the sewing machine.

At a country circus, she met Ray, a boy with powdery hands, like buttery talc, who worked the spinning cups in a traveling show.

His mother was a bearded lady, his father the world’s tallest man. His beloved uncle Meurice, a merman, who died long ago, was laid out, taxidermied in a glass vitrine that traveled wherever the family went—a quarter a peak.

Ray asked her about her homeland and she told him about the veiled life, she told him there were places she couldn’t go, she told him she was invisible there—people only saw what they wanted to see, they didn’t look very far. She told Ray that when she left she knew she would never go back. Her family wept as she sewed herself into her disguise, their tears filled the river that floated her down to the sea—her home was lost to history. As she told Ray the story of her past, her eyes filled and heavy tears dripped plink, plunk onto Uncle Meurice’s vitrine. Ray wiped the vitrine dry and never asked her about it again.

When their daughter was born with an extraordinarily long needle sharp index finger—that featured a boney eye for thread to pass through, they thought it a plus. They named her Penelope. She could thread herself through fabric, through wood, and drill though metal. Penelope was incredibly good at math, winning a scholarship to a prestigious engineering school. She graduated with honors and took jobs building ships, airplanes, skyscrapers. Their son, Morris, named after Ray’s famed mer-uncle, was born with wings transparent fire-resistant flesh webbing from his arms to his ribs. His shirts had to be custom made. A more successful Icarus, Morris made the first successful ship-less solo flight into space and returned with an incredible tan. At a very young age he married an ornithologist and they nested on the top floor of a high rise.

“Yours is a family of unusual traces,” a soothsaying neighbor said.

“We are bred to survive,” Ray answered, accidentally clipping the woman with his weed wacker, lacerating her ankles. “It is evolution—we keep what we need, we lose the rest.”

Morris had an irrational fear of infants of all kinds and so he and his wife lived with their two ancient Labradors, their deaf screaming cockatoo, and various geriatric gray parrots and macaws all adopted at an advanced age. They opened their doors to all elderly animals, “Don’t put your pet out to pasture, give it a new life at Ye Olde Animal Haus,” was the slogan on their matchbooks.

Penelope, so smart and successful, was lonely. Strolling the seaport, she met a sailor from far away; they married that night and immediately returned to the water.

Packing to go, her mother gave her the family heirloom the scrap saved from the grandmother’s center seam. Penelope recognizing it’s significance, affixed it to her skin–a scaly merkin mounted with crazy glue.

Given the family’s history it came as no surprise when Penelope’s parents received word via carrier pigeon that identical twins had born on an island off Key West with gills and organs of both sexes—identical hermaphrodites Tasiña and Tasi.

“A youthful widow, single mother, a woman with needs of her own. Penelope began an affair with a dolphin.”

“Great grandchildren!” the newly minted great-grandmother announced to the ladies of her sewing circle, leaving out the spawny details. The sewing circle clucked approvingly. Long ago when she joined the sewing circle, she told anyone crass and curious enough to ask about her scales that she was a burn victim. It was easier for people to understand and she wasn’t looking for trouble.

A stitch in time saves nine, a fish in time, saves mine.

Thimbles and Threads, the ladies called themselves—a ministry that stitched for salvation; “Charity Never Faileth—Sew What’s New? They knitted hats for cancer patients, socks for orphans, afghans for Afghans, lap blankets for cold old women and men, the grandmother donning a thimble to darn watch caps for the Christmas at Sea, “Leave No Keppe Cold,” a Jewish military relief organization.

But soon Penelope’s sailor mate met a bad end. Not used to living on land, he had gone ashore and failed to look both ways when crossing train tracks and even though the conductor slammed on the brakes nothing was spared, and his bodily mash was returned to the sea in a potato sack covered with salt tears.

A youthful widow, single mother, a woman with needs of her own. Penelope began an affair with a dolphin. In a dispatch to her mother she described him as a great conversationalist, incredibly loving, and gifted in special ways. “He can curl his member like a finger beckoning . . . I won’t say more lest you think me crude. Swimming with him reminds me of when I used to dance standing on daddy’s feet, waltzing in time. For the moment, I am content to live as a fish.”

Her sailor’s children Tasina and Tasi matured quickly and were ready to replicate—each able to complete the process entirely on their own. To her dismay, Tasi, her he/she daughter, declined she felt the need to hang on to herself to be in essence, copyrighted, but Tasina her she/male son turned out little ones by the dozen. Some stayed on land, some on the sea, some sold sea shells, another had fleas, four go to Harvard, two go to Yale, a dozen go to Trinity and one goes to jail. Another spends his days surfing big waves in Hawaii and the oldest is a federal judge swearing in people who promise not to tell tall tales. Tasi, having spent so many years raising children found it difficult to get a job and worked as a temporary secretary—She/He’s pretty but can she/he type? Penelope, now twice widowed, having had enough of it all, returns to the city. A septagenarian who looks forty, well preserved from a life in salt water, she comes back to New York. Having learned a thing or two from her kids, she tells everyone that she wants to be called Tom.

She packs plastic bought on the Lower East Side at Babes in Toyland and tends bar down by the water at a place called, Henrietta Hudson’s, spinning her yarns to any available ear. One of the girls at the bar tells her the story of a straight businesswoman who packs just because she feels it gives her a competitive edge. “No one knows what you’ve got tucked in your pants until you get hit by a train,” she says and Penelope Tom nods knowingly.

One night spindly Sarah Spider, a sex therapist, sits down next to Penelope Tom near closing time and starts spinning a handsome web. Penelope Tom admires the handiwork and the mating dance begins. “It’s been so long I wouldn’t know where to begin,” Penelope Tom confesses, as Sarah’s expert hand travels up her thigh. She remembers the sensation her mermaid mother spoke about and having inherited her hypersensitivity and not forgetting that she’s still got the old scaly merkin crazy glued over the spot, she feels her/his packy getting moist and squishy. Sarah spins a wicked web, leading Penelope Tom back to her apartment after closing up shop. Sarah ties her/him up and down and is just about to cuff her to the bed when Penelope Tom realizes that there’s more to it than that. Lost between her legs, a latex hot head, Sarah is a cannibal and a carnivore and she’s the midnight snack. As Sarah is using her pincers to pry the merkin loose, Penelope Tom comes to her senses and with her elongated index finger—the needle nail grown tough over time is now like an ivory tooth—pierces Sarah’s shell. The stabbed spider spurts bug juice everywhere.

Penelope Tom takes a taxi to her granddaughter Tess’s house in Harlem, leaving her cock and balls behind, hoping she can hide out for a while. Tess, a fashion designer, has a boyfriend who, nostalgic for the ontogenetic past of life in the womb, internalizes the water—he drinks his morning urine. It harkens back to the water of his early life, the amniotic, the oceanic. His habit has prompted many women to leave him. Tess just nods, she brings him a tall glass to pee in, “Bottoms up,” she says, liking the way his penis fills the glass, like a soda syphon “Aqua vitae.”

While recovering at Tess’s, Penelope Tom catches up on her reading and finds that while on it’s journey, the space rover Opportunity discovered evidence of water on the surface of Mars and is intrigued at the idea that at some unknown time in the distant past there was life on the red planet. She gets it in her head to do one thing before she dies—with her engineering skills she will build

Because of her age, because she is a woman (before she is a man), because of all of history and everything that has come before, she is once again invisible. No one notices the little old lady man in Harlem building sewing herself a space ship. Nautilus Neptune. She confides in Tess, who supplies heat resistant fabric and helps her grandmother saw off her index finger needle, which they affix to the space ship as an evolved antenna of Darwinian evolution. As she’s preparing to go, she affixes what has become the family seal, the historic remnant of scaly merkin to the nose of the Nocturnal. On the appointed day, Tess stands on the roof of the building and lights the long fuse. Wearing welder’s goggles she watches as her grandmother takes off, a bright blast, an eruption, carrying the past into the future with a sonic boom that echoes around the world.

From Days of Awe. Used with permission of Viking. Copyright © 2018 by A.M. Homes. This story originally appeared in Gagosian Catalog.

16 Books You Should Read This June

How Cooking Frees My Mind to Think About Writing 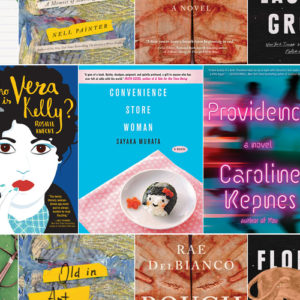 16 Books You Should Read This June Caroline Kepnes, Providence (Lenny) In her first standalone, Kepnes combines the suspense and careful plotting of crime...
© LitHub
Back to top