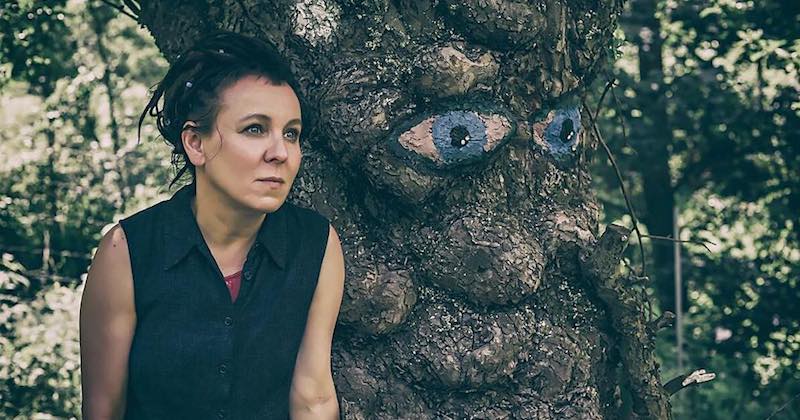 As you no doubt know, Olga Tokarczuk was recently awarded the Nobel Prize in literature, “for a narrative imagination that with encyclopedic passion represents the crossing of boundaries as a form of life.” Over the weekend, the Nobel Prize committee shared her translated Nobel lecture, which was translated by Jennifer Croft and Antonia Lloyd-Jones. It is, as you no doubt would imagine, luminous:

1.
The first photograph I ever experienced consciously is a picture of my mother from before she gave birth to me. Unfortunately, it’s a black-and-white photograph, which means that many of the details have been lost, turning into nothing but gray shapes. The light is soft, and rainy, likely a springtime light, and definitely the kind of light that seeps in through a window, holding the room in a barely perceptible glow. My mom is sitting beside our old radio, and it’s the kind with a green eye and two dials—one to regulate the volume, the other for finding a station. This radio later became my great childhood companion; from it I learned of the existence of the cosmos. Turning an ebony knob shifted the delicate feelers of the antennae, and into their purview fell all kinds of different stations—Warsaw, London, Luxembourg and Paris. Sometimes, however, the sound would falter, as though between Prague and New York, or Moscow and Madrid, the antennae’s feelers stumbled onto black holes. Whenever that happened, it sent shivers down my spine. I believed that through this radio different solar systems and galaxies were speaking to me, crackling and warbling and sending me important information, and yet I was unable to decipher it.

When as a little girl I would look at that picture, I would feel sure that my mom had been looking for me when she turned the dial on our radio. Like a sensitive radar, she penetrated the infinite realms of the cosmos, trying to find out when I would arrive, and from where. Her haircut and outfit (a big boat neck) indicate when this picture was taken, namely, in the early sixties. Gazing off somewhere outside of the frame, the somewhat hunched-over woman sees something that isn’t available to a person looking at the photo later. As a child, I imagined that what was happening was that she was gazing into time. There’s nothing really happening in the picture—it’s a photograph of a state, not a process. The woman is sad, seemingly lost in thought—seemingly lost.

When I later asked her about that sadness—which I did on numerous occasions, always prompting the same response—my mother would say that she was sad because I hadn’t been born yet, yet she already missed me.

“How can you miss me when I’m not there yet?” I would ask.

I knew that you miss someone you’ve lost, that longing is an effect of loss.

“But it can also work the other way around,” she answered. “Missing a person means they’re there.”

This brief exchange, someplace in the countryside in western Poland in the late sixties, an exchange between my mother and me, her small child, has always remained in my memory and given me a store of strength that has lasted me my whole life. For it elevated my existence beyond the ordinary materiality of the world, beyond chance, beyond cause and effect and the laws of probability. She placed my existence out of time, in the sweet vicinity of eternity. In my child’s mind, I understood then that there was more to me than I had ever imagined before. And that even if I were to say, “I’m lost,” then I’d still be starting out with the words “I am”—the most important and the strangest set of words in the world.

And so a young woman who was never religious—my mother—gave me something once known as a soul, thereby furnishing me with the world’s greatest tender narrator.

Read the rest here. If you speak Polish, you might also like to watch her deliver it here.