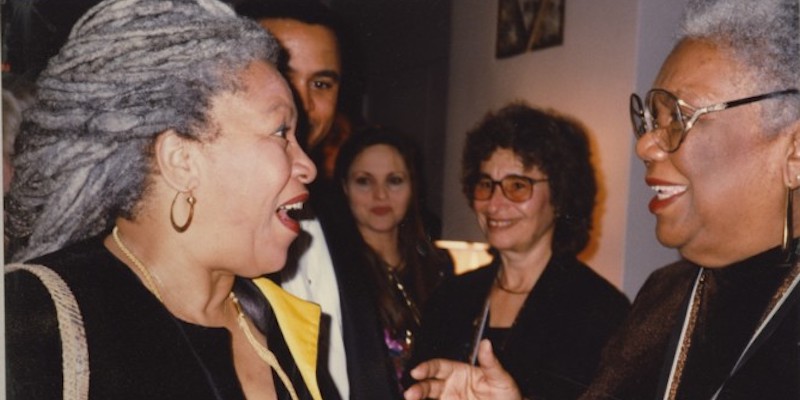 In addition to being a prolific novelist, Toni Morrison was a prolific editor. She was committed to championing Black writers, both through her role as senior editor at Random House and her work with writing collectives like The Sisterhood (which included literary giants like June Jordan, Alice Walker, and Ntozake Shange), and published work by Angela Davis, Gayl Jones, and Toni Cade Bambara. “I thought it was my responsibility to publish African American and African writers,” she explained. Especially since most of them “would otherwise not be published or not be published well, or edited well.”

Morrison and Lucille Clifton first met during their years at Howard, but lost touch until they re-connected in the 70s when Morrison started working as Clifton’s editor at Random House. In a 1998 interview, Clifton said, “I think that I must pay a tribute to Toni Morrison as an editor, because her inclination in writing is so opposite mine. She writes ornately, you know; she puts things in. I take things out all the time. And that is a tribute to her as an editor, that she edited this book, and was able to edit someone whose inclination is not the same as hers is in writing.”

And Morrison clearly valued Clifton’s work. “Now I have read all of the new poems,” she wrote in a 1973 edit letter after reading the poems that would eventually make up Clifton’s An Ordinary Woman, “and they are so good—very different (the feel of the collection) from the other two. I am not sure what the difference is yet. It’s not just content—it’s the what? Fabric, I guess, or tone. Mellow. Less of the acid in Good Times or the outrage in Earth. Mind you, you cover that acid in comfort—but it was there anyway.”

Of course, they didn’t always agree. Case in point: the 1973 letter. In it, Morrison goes on to suggest a few edits for An Ordinary Woman, most of which Clifton rejects. My favorite part: the simple, giant question mark next to Morrison’s claim that “the title doesn’t satisfy.” Indeed, what is more Clifton than saying so much with so little? (She kept the title.)

You can read the full letter here.