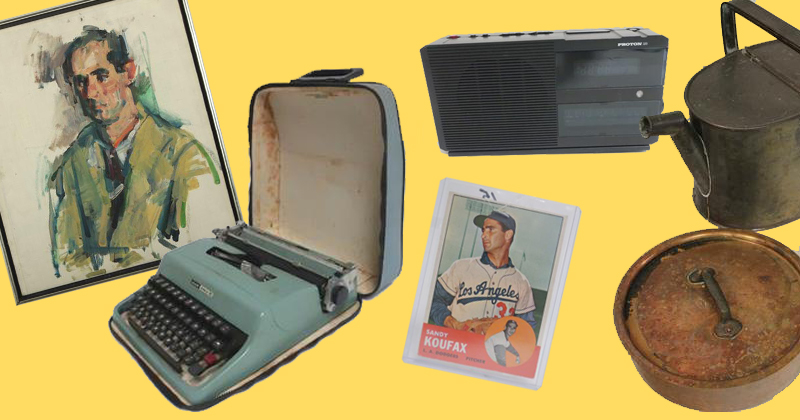 This summer, Litchfield County Auctions will be auctioning off hundreds of items from the estate of Philip Roth, including furniture, fixtures, loads of Chinese art and artifacts, and rather more sterling silver than you might expect, as found in his home and holdings after his death. The actual auction will take place on July 20th, but bidding has commenced online—so if you want your own piece of Roth, or at least an old chair that he sat on, hop on it. (At the moment, estimated prices look pretty low for a lot of this stuff—though of course that may change dramatically.) “Hello.”

Highlights from the auction include:

A 1963 Topps Base Set #210 Sandy Koufax card in a plastic sleeve—“Roth, a baseball and Dodgers fan, was a lefty like Koufax to whom some felt Roth bore a resemblance.”

Roth’s own personal picture of Kafka.

Roth’s clock radio—“as found on the bedside table of the master bedroom.”

A poster of LBJ and JFK, with LBJ button attached—“the presence of the poster is noted in New York magazine’s 13 January 1969 article by Howard Junker about the writer.”

An unsigned oil portrait of Roth.