You Can Blame Geoffrey Chaucer for Valentine’s Day

But Probably Not For Your Loneliness

It’s Valentine’s Day, otherwise known as the worst night of the year to go out to dinner, the day of awkward lower school politics, “amateur day for assholes,” Big Candy Christmas, and, this year, Friday the 13th. I guess some people might be excited for the chocolate and/or edible massage oil they’re about to get (that’s what people get, right?), but I feel confident they’re in the minority. Still, no matter what you personally feel about Valentine’s Day, this year, you can blame Geoffrey Chaucer.

But let’s go back a little bit. Though his name is now inextricable from the most desperate and cloying of all Hallmark Holidays (you can trust me on this assessment of Valentine’s Day because I am a newlywed and therefore at my most romantic, with no reason to lie, and yet), we all know that St. Valentine was a third-century Roman martyr, whose saint’s day is February 14.

However, according to Professor Lisa Bitel, no fewer than three (3) different martyrs named Valentinus died on February 14th, all of them during a two-year period towards the end of the third century. Jack B. Oruch reports that the name was so popular that over 30 Valentines, not to mention “a few Valentinas,” ultimately achieved sainthood. However, no matter which Valentine you look at, their traditions and texts have nothing to do with love or courtship. As Oruch has noted, despite the claims of some critics, there is no evidence of any “Valentine convention” (as we understand it today) in “literary or social customs, before Chaucer.” Instead, St. Valentine became known in the centuries after his (their) death(s) as the patron saint of epilepsy. And beekeepers. And as a matter of simplicity (and research) the three obviously became one.

And that was that, just bees and seizures, until one Geoffrey Chaucer stuck his pen in.

The earliest known suggestion that Valentine’s Day was a day for lovers comes from Geoffrey Chaucer’s 14th-century poem “The Parliament of Fowls,” in which “Seynt Valentynes day” is the day “whan every foul cometh ther to chese his make” (i.e., in case it’s been a long time since AP English, when birds come to choose their mates). Considering Chaucer was basically the equivalent of a Kardashian in his day, the people—starting with his friends, of course, notably poets Oton de Granson III and John Gower—followed his lead and began to use the feast of St. Valentine for their romantic purposes. The earliest surviving explicit “Valentine” we have is from about a hundred years later—in February 1477, Margery Brews wrote to her fiancé John Paston, calling him her “right well-beloved valentine.”

Why Chaucer thought spring was in mid-February is another matter. Possibly it was due to the fact that “the date of the beginning of spring was far from being set firmly in the 14th century,” Oruch writes. Calendars were wildly different from each other, and in Chaucer’s day, if you looked at a calendar, you “probably would have found the beginning of spring marked at February 7 or 22 or (much more likely) at both.” At the very least, Chaucer’s February 14th would have been more like our February 23rd, which at least gets us within spitting distance of March. So was Chaucer was just really ahead of his time on the whole global warming idea, or is this really is when birds choose their mates? (What’s the bird equivalent of cuffing? Ruffing? I don’t know about birds.) According to Oruch, “quite a few birds do pair during February in England, including the missel thrush, raven, partridge, rook, heron, grebe, lapwing, and blackbird.” Okay, then. Ruffing it is.

Poets like William Shakespeare and John Donne continued Chaucer’s tradition in their poetry, Bitel explains, further cementing St. Valentine’s reputation as a patron of romantic love. And, she writes, “by the 19th century, English consumers were ready and eager for cards with poems already printed on them, preferably decorated with love birds, hearts and Cupid (rather than the image of a headless Roman bishop).

The London Journal of 1858 supported the custom of exchanging observance love tokens on Valentine’s Day, declaring that it was both “natural” and “proper” that, at the start of spring, “the predominating sentiment in the human mind should be the sentiment of love; and to this accordingly the anniversary of our saint is directed.” However, the publication preferred home-made cards to mass-produced Valentines, about which the editors opined: “If we were to give a general character, we would say they are very trashy and not a little vulgar; and . . .the production of mercenaries for hire.”

So whatever your hippie parents say, rebelling against the corporate nature of Valentine’s Day isn’t exactly new. But now at least you can blame all the lovey-dovey stuff on Chaucer—whether that makes you ignore it or celebrate it depends entirely on your own temperament. 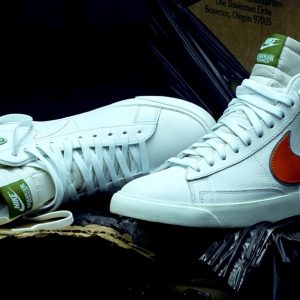 The shoes that Nguyen Thi Thu Phuong died making were designed at Nike’s headquarters in Beaverton, Oregon. The plans for the shoes...
© LitHub
Back to top