Writing to Survive: A Father on the Death of His Young Son

"I write to stop roaming the streets."

Two weeks after my eight-year-old son Owen died, I began writing about life without him. There was no plan. I made lists of things Owen had liked and disliked; I collected memories—sentimental, humdrum, tactile. I went about this task feverishly, convinced that unless I transcribed these memories as soon as they surfaced, they would melt, they would vanish, Owen would melt and vanish.

Mostly, I chronicled my infinite shifts in mood, what my wife and my other son said and did not say, what we did and were unable to do. Two files were always open on my laptop: the day’s task and this journal. I would leave the work document in the middle of a paragraph and return after five minutes, or twenty, or perhaps not until the next day. If I was far from my desk, I jotted down thoughts on scraps of paper that I stuffed in my pockets.

I had not kept a journal in over twenty years, and now I wrote at all hours, seized by a graphomaniac impulse that confounded me. Some days, I felt myself retreat from the world and the ones I loved, as if writing and everyday life had become distinct realms between which I circulated, fully existing in neither.

The psychiatrist Elisabeth Kübler-Ross urged parents who have lost a child to steer clear of Valium. She did not issue the same warning about writing. I do not think that many mental health professionals do; writing is deemed therapeutic. After his eight-year-old Anatole died, the poet Stéphane Mallarmé began work on a poetic tomb (as he called it) for his son, a vault that would encase “the immense void produced by what would be his life—because he does not know it—that he is dead.” Mallarmé never completed this work, but that was not the point: the writing must have provided something, if only deeper immersion within that void.

Writing tempers the hurt, but might it not also deaden nerve endings? Writing can prove less painful than life, but might this mediated existence not keep experience at a remove?

On some days, writing made me feel like a voyeur of my family’s distressed life. Private pain can all too easily become public spectacle, even if it is not shared. I could not imagine that Owen, who was so secretive and did not yield to authority, would have allowed someone else to draw his portrait—not even his father.

Besides, how could I capture the depths of a person whom I brought into the world but did not fully know? We raise children with the hope or conviction that we will understand them, but so much escapes us. Writing about Owen felt like an affront. Not a second death—those words are too strong —but a confiscation, a flattening.

I told myself not to sentimentalize. Shun metaphors, avoid innuendo, refuse flowery language. Events such as this call for restraint. Still, I found it difficult to resist the pull of poetry, the need to take hold of reality and give it aesthetic shape, to enclose horror and reenchant the world. Beauty felt necessary—and at the same time impossible. How could a world without Owen remain enchanted, especially when he died on a rafting trip advertised as safe for children seven and above?

Could I write about what we came to call the accident with the requisite honesty? Cut close to the bone, as close as possible to the substance of things? Words that are indispensable—a testament to those we love—can also prove to be intolerable.

And so, as if this would bring justification, I kept asking myself why I could not stop writing. The answers were never the same.

I write to avoid the pain, to find out if I still exist, to make sure I did not vanish on the river. I write to stop roaming the streets.

I write because our lives tipped over and I want to understand the world into which I have tumbled.

I write in homage and remembrance, in contrition and penitence.

I write so that Owen will be less alone.

I did not reflect on these journal entries about writing itself—not consciously. I lacked distance and was already expending so much energy on myself. Writing could feel self-indulgent, even indecent. Owen had lost his life, after all.

But one day, a friend told me that journal writers are not alone even if, like me, they write without the intention of sharing their words. “We always write for others,” he said. “Even when writing a private journal, we are with others.”

And then I read this line by the novelist Annie Ernaux: “It is not because things happened to me that I write them; it is because they took place, and hence that they are not unique.” The circumstances of our individual lives are specific, but the need to bear witness and grasp the events, the tragedies of our world is not.

I now understand that by chronicling my life in intricate detail, I wasn’t just examining a deeply personal pain; I was also looking outside of myself. I wrote because certain human disasters, certain forms of suffering require stories for the living and the dead—stories that reach beyond horror to imprint meaning upon events that defy understanding.

Writing did, momentarily, pull me away from the world and the ones I loved. But in this moment, I also connected to the people who surrounded me. Whether they had lost children or not, I summoned them by my side. When I wrote, when I asked myself why I was writing, I existed once again in the world.

Stéphane Gerson’s memoir of his family, Disaster Falls, is available from Crown.

Stéphane Gerson is a cultural historian and a professor of French studies at New York University. He has won several awards, including the Jacques Barzun Prize in Cultural History and the Laurence Wylie Prize in French Cultural Studies. He lives in Manhattan and Woodstock, New York, with his family. Visit his website at DisasterFalls.com. 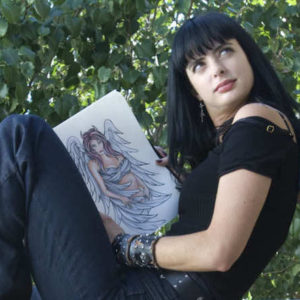 On Wednesday, Krysten Ritter, whom you may know as Jessica Jones—or from her memorable roles on Breaking Bad and Veronica...
© LitHub
Back to top