On Wednesday, Krysten Ritter, whom you may know as Jessica Jones—or from her memorable roles on Breaking Bad and Veronica Mars—announced that she will be publishing a novel this November with Crown Archetype. EW reports that Ritter’s novel Bonfire is “a psychological thriller that will focus on small-town corruption as environmental lawyer Abby Williams returns to her hometown after ten years to investigate Optimal Plastics, a local company, of dumping chemicals in local water. But in the process, Abby starts digging into the years-old disappearance of a former high school bully of hers, which in turn, leads her to an even darker secret about the town.” This sounds very Krysten Ritter-y, of course. She is working on the project in conjunction with Paper Lantern Lit, a “literary incubator” that creates the story idea, plot, characters, and structure, and then matches all that backbone with a writer to bring the book to life.

Well, if famous people are taking ideas for novels, I have a few. What are they, you ask? My (very serious) suggestions are below. Feel free to add your own—you never know…

St. Vincent: Moon & Eye
An experimental book that pushes the boundaries of form and genre; it arrives in four separate pieces that are hidden in a maze. These pieces tell the story of the Moon, living life on Earth as a postal worker. Everything is fine until the Moon delivers a package to a very strange and beautiful woman. Moon and woman become separately and secretly obsessed with one another, and each discover a secret that will bind them forever.

Beyoncé: Standing on the Sun
In this afrofuturist war epic, a beautiful pair of twin army captains who the prophesies say are fated to save the sun—where the last survivors of a destroyed Earth have settled—and are now engaged in a deadly battle for survival against a strange alien race. But just when the battle is most dire, a handsome man threatens to come between the two sisters, and all three of them must decide where their loyalties truly lie.

Jennifer Lawrence: The Bitter Minute
An all-girl gang that’s also a punk band (they call themselves The Bitter Minute) pulls off the heist of a lifetime—and then its members proceed to spend the rest of the novel sitting around their secret hideout writing songs, braiding each other’s hair, and ordering nachos from the Chinese restaurant down the street that secretly also has nachos. That is, until they are discovered by an evil businessman, whom they capture and keep as their pet.

Zooey Deshcanel: The Secret Life of Flowers
A charming YA romance about two flowers from different worlds—Stephanie, a daisy, and Philip, an orchid—who fall in love and must try desperately to convince their families to accept them and their unconventional union. Also, God is a deer.

Aubrey Plaza: Deep South
In this rollicking Western, set in Hell, an evil dog walker and a famous riverboat captain embark on an epic quest to seek revenge on the little old lady who has stolen their souls and hidden them in one of her many cans of split pea soup. But the little old lady is not what she seems—and neither, we soon find out, is anyone else.

Nicki Minaj: The Jewelry Box
A slim surrealist novel in which a famous international jewel thief suddenly finds herself in an alternate dimension made entirely of jewels. There, she meets a witch who sets her a challenge. If she succeeds, she will become queen of the jewel-realm. If she fails, she will be imprisoned inside one of the gems for all eternity.

Evan Rachel Wood: The Glass Monster
A gothic horror-fantasy mashup of Beauty and the Beast and Bluebeard, in which a young man wandering in the woods comes across a castle made of glass. Inside is a woman so terrible and beautiful that he can hardly bear to look at her, for fear that he will die, or fall in love instantly. She imprisons him in her library, where he finds the heads of six previous suitors; things proceed from there.

Jeff Bridges: Losing the Way
A spiritual road trip novel in which nothing ever happens and no one ever goes anywhere—but they travel a long way all the same, man.

Tilda Swinton: Who
Owls have taken over the United Kingdom. Separately, a little boy and his grandfather live together in a small wooden shed, where the old man teaches the young man to paint and tells him the history of his war-torn life, so someone will be able to carry on his work and memory after he dies.

Writing to Survive: A Father on the Death of His Young Son 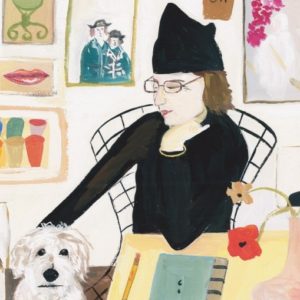 Maira Kalman talks to Paul Holdengraber about the search for meaning, finding your limits, and the pleasures of being a mother...
© LitHub
Back to top