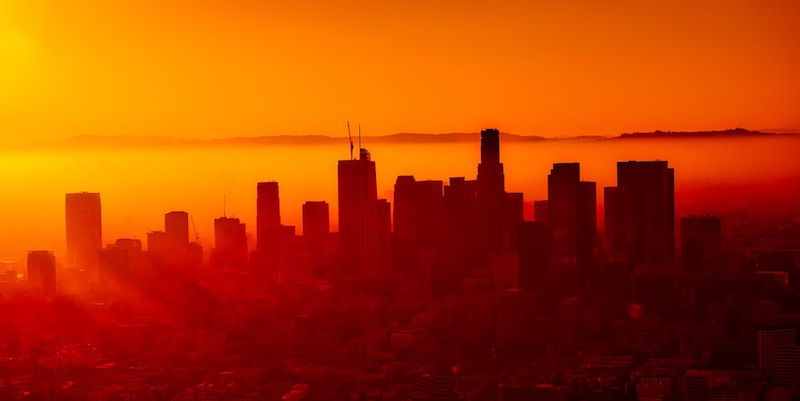 Writing the Story of a Disappearing City

Zan Romanoff on the Shifting Identities of Los Angeles

The Getty Fire, which burned more than 700 acres of west Los Angeles last fall, broke out in the first hours of the morning of October 24. This meant that by the time I woke up on the other side of the city, the news of it was already everywhere—except where it had been crowded out by reports of the Kincade blaze in Sonoma County, which would eventually consume nearly 80,000 acres of Northern California, or, more locally, the Tick Fire, which was just an hour away in Santa Clarita.

I was born and raised in Los Angeles; I am a veteran of fire season, of scanning containment percentages and weather reports, and the way that clouds of smoke and ash turn sunlight a pale, unnerving orange. When I was younger the season was shorter, the fires smaller and further away; now every year they come in closer, burn hotter and longer and meaner.

Every time there is a fire in LA, a friend or two from another state will text to ask if I’m okay, which I appreciate even though the answer is, fairly invariably, yes: my neighborhood is dense, urban, not the kind of place that wildfires commonly encroach on.

The Getty Fire made a lot of news—a big museum was threatened, as were the lives of housekeepers and gardeners whose rich bosses hadn’t thought to tell them that the neighborhood was evacuated and they shouldn’t come in to work—so I got a lot of texts.

Privately, though, I was mourning a silly, invisible loss, one that affected absolutely no one else, but was nonetheless very real to me. The book I had spent the last four years writing—which had just been sent to be press, to be published in the spring—took place largely at fictional hotel right in the center of the Getty Fire’s burn.

The threat of Los Angeles has always been that it will move from underneath your feet without warning.

I had spent years living in that place in my mind. I mourned it on my characters’ behalf, and also on my own. Now, when I read Look at a book event, I always remember with a slight startle: oh right. This was written before.

Writing books takes a long time, but getting them published can take even longer. I finished the first draft of what would become Look in December of 2016, but it didn’t sell until the spring of 2018, some sixteen months later. It wouldn’t come out for another two years, in March of 2020. This is considered a normal timeline in the industry—even a fairly speedy one.

This means that if you are writing contemporary fiction, unless you set your book in a specific year, you are always taking something of a gamble in assuming that reality in which you write your book and the one in which you publish it will resemble one another closely enough for readers to accept your world without question.

Of course, you can always make adjustments to the manuscript along the way—I spent one of the final rounds of edits on my second book, Grace and the Fever, turning Instagrams into Snapchats—but at a certain point, several months before its release date, the book goes to press, and then you’re stuck with what you have. (Those months for Grace were, of course, when Instagram introduced Stories, and Snapchat lost its crown as teen social media app of choice, rendering all of my last-minute find-and-replacing moot.)

What’s more difficult is when something big happens in the culture, but you don’t know how it’s going to play out yet. The 2016 election was one such event: I watched as friends who had books releasing in the next six months as they frantically tried to guess how much our daily lives were about to change, and whether their novels would be published into an unrecognizable world. I was grateful that I had so much time to figure out what the Trump administration might mean for Look.

And then, of course, when it finally did come out, it was in the early weeks of an unprecedented global pandemic.

After the frustration of trying to make sure the exact right right app names made it into Grace, I dedicated myself to the art of the non-specific in drafting Look. I invented a catch-all social media photo-and-video sharing app called Flash, and took care to mention as few real-life celebrities and locations as possible.

I wasn’t willing to give up LA as a setting, though. The city is my home, and it is important to me to write specifically, accurately, and lovingly about it. (There is just so much bad media about LA; it feels like my responsibility to counterbalance it as best I can.)

Now, though, I look at the book and the city and they don’t match at all. The Hotel would have burned down in October; the Beverly Hills deli Lulu and her sister eat lunch at early in the book, Nate N Al’s, is in the midst of a dispute with their landlord which may soon see them forced out of the location they’ve occupied since 1945. Of course I couldn’t have predicted the specifics of the Coronavirus, but it still feels sometimes like I failed, like now the book is a relic, instead of a vital object, living in tune with the rest of the world.

What does it mean to write a city accurately? What is the point of a contemporary realistic novel? I love the space for complexity that the novel form provides, but its length ensures there’s no way to write one fast enough to keep pace with our current reality. Inevitably, a book is a document of a past world, an elegy to a specific moment—one that is always already gone.

Plus for which, it is, I will admit, a madwoman’s project to try to pin down a city like LA, even in the best of circumstances. The whole point of this place—the reason I love it—is because it is always changing, and always surprising me, every day offering up new city blocks, new street vendors, new parks and hiking trails, new communities to visit or maybe join.

That is the beauty of Los Angeles. And the threat of Los Angeles has always been that it will move from underneath your feet without warning.

Perhaps that’s why I can’t stop thinking about what’s “wrong” with my book: because I wrote it in order to pin things down, and the city among them. Instead, all it does is remind me of the versions of the world I’ve already lost, am constantly losing. It assures me that no matter how many books I write, nothing will never belong to me; I will never understand the world, much less get to keep it.

It doesn’t stop me from trying, though, scribbling away, draft after draft. That’s the cornerstone of the writer’s delusion: that the next book will be the one that explain you to yourself, and yourself to the world. That there’s any such thing as timeless, as transcending chaos, when in fact the best we can do is carve up reality into thin slices—it was just like this, just then—and offer our small understandings up to the world, asking to be allowed to believe that they matter. 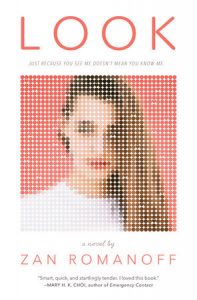 Look by Zan Romanoff is available via Dial Press. 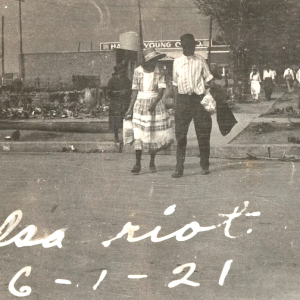 Norman, Oklahoma June 1, 2020 Dear John (Freeman), I prayed before writing you this letter, on this evening, when...
© LitHub
Back to top
Loading Comments...