Writing Just Enough Detail, But Not Too Much

In the late 1990s, when I decided I wanted to be a writer, I took part in a few writing workshops, and one common thread among them was the vital importance of detail, of describing things beautifully. But a lot of emphasis was also put on precision and economy. This translated to phrases such as “not wasting a single word,” “searching for the exact word,” and “trimming sentences as much as possible.” When choosing to describe something or include any detail in fiction, we should always ask ourselves whether it helps move the narrative forward, reinforces the character’s psychology, or serves any other technical purpose. Otherwise, leave it out. You want detail, but a very precise amount of it, in doses ranging from small to homeopathic. As James Wood said in How Fiction Works, specificity is in itself satisfying, and we expect such satisfaction from literature. But I had also been taught that if you exaggerate, you might overwhelm or simply bore the reader.

But I always loved authors that indulged themselves. In the end of 2004, the period I started writing my novel The Shape of Bones, I was also reading Infinite Jest, my first contact with David Foster Wallace’s work. His overflowing descriptive powers, in which details were often delivered in lists that appeared to go on forever, could become tiring, but never failed to awe and draw me into the book’s universe. It was obviously excessive, he was daring us to take it all in, and it worked, at least for me. Even though I was light-years away from Wallace’s gifts, his novel gave me the green light to indulge myself within the boundaries of my own style.

This newly acquired freedom soon resulted in the opening chapter of my novel, where a ten-year-old boy rides his bike around the neighborhood, imagining he’s a sort of superhero, The Urban Cyclist, until he crashes. I crammed in as much detail as I could, hoping the reader would be transported to the boy’s imagination and feelings. Today I see that in several other passages of the book I was exploring the possibility that longer-than-recommended descriptions and lists of details could also tell the story and even replace action.

This approach influenced my research methods too. I remember walking the streets of my old neighborhood, Esplanada, writing down the names of streets and trees, describing the pavement and the front gardens of the houses, registering every sight, sound, and smell, in case I needed to include them in a scene. Google Images wasn’t the visual oracle it is today, but I’d go to the internet in search of useful jpegs that helped me remember exactly how an old computer game or Porto Alegre’s south area looked in the early 1990s, when I was still a kid who could hardly dream the internet.

Detail is not ornamentation you apply to action and dialogue the way you add seasoning to food. It has a narrative function as well. If you tell the reader the rock upon which a character is sitting is “warm,” you are suggesting a process, an experience. The story is not about the sun warming the rock, neither about a person experiencing that warmness in her butt, but I believe we go over those aspects, deep in our imaginations, while reading that sentence. Our awareness might be directed to the dialogue, the action, the character’s feelings and thoughts, but that detail about the temperature of the rock is turning subtle storytelling gears below the surface, strongly contributing to the whole reading experience.

Years later, I had another insight about the powers of description. This one had to do with neuroscientist Antonio Damasio’s book The Feeling of What Happens: Body and Emotion in the Making of Consciousness, first published in 1999. I read the book in 2007, but the insight came a couple of years later, when I was already working on my novel Blood-Drenched Beard. I will not try, of course, to give a full picture of Damasio’s cognition theory here. Suffice it to say that his theory of consciousness consists of a series of hierarchical stages, the most basic one being the protoself, followed by core consciousness and extended consciousness. They correspond to three closely related phenomena: emotion, the feeling of that emotion, and our knowledge that we are feeling that emotion. The protoself, a non-conscious state of the self, results from an assymetry inside the brain: while some parts of the brain are “free to roam over the world” and react to external sensory input of all kinds, other parts are “stuck” and can map “nothing but the body.” In order to regulate its own survival, the brain holds a model of the whole organism. “I have come to conclude that the organism, as represented inside its own brain, is a likely biological forerunner for what eventually becomes the elusive sense of self,” writes Damasio.

Among the many implications of this theory of embodied cognition one was especially interesting to me: our emotions, feelings, and conscience are phenomena of growing complexity, but they are all rooted in basic biological regulatory functions, sensory input, and homeostasis. Or, as Damasio puts: “We still need digestion in order to enjoy Bach.” We can now drop neuroscience and go back to writing. Here’s what I thought: what if randomly, gratuitously stimulating our senses through detail and description could generate emotions that would help make the reader feel inside the imagined worlds we create? Whenever I offer, by way of written language, a sight, a sound, a smell, a texture, a taste, a temperature, a pleasing or painful sensation, I might be activating emotion and feeling at some level in the brain, regardless of the specificity or function of that detail to the novel’s plot, or the character’s psychology et cetera. If that’s the case, exuberant description, even when apparently unnecessary, becomes a tool of immersion.

This is not a scientific theory, of course. We could call it a useful analogy, at best. In Blood-Drenched Beard, I experimented with it a little. The feedback I got since publishing it tells me that some readers feel the novel is bloated with pointless detail, but many enjoy the book’s style and consider it an immersive read. It’s worth mentioning that its main character, a triathlete who moves to a fishing village called Garopaba hoping to uncover secrets about his grandfather’s killing, suffers from a condition called prosopagnosia, or face blindness, the inability to recognize people’s faces. I learned about it in Damasio’s book, too. The condition of the protagonist gave me the excuse to fill the narrative with a calculated amount of “useless” detail, since the face-blind pay attention to every detail about others and their surroundings, hoping it will help them recognize people in the future.

In Edgar Allan Poe’s story, “A Descent into the Maelstrom,” he writes:

Never shall I forget the sensation of awe, horror, and admiration with which I gazed about me. The boat appeared to be hanging, as if by magic, midway down, upon the interior surface of a funnel vast in circumference, prodigious in depth, and whose perfectly smooth sides might have been mistaken for ebony, but for the bewildering rapidity with which they spun around, and for the gleaming and ghastly radiance they shot forth, as the rays of the full moon, from that circular rift amid the clouds which I have already described, streamed in a flood of golden glory along the black walls, and far away down into the inmost recesses of the abyss.

I was 15 when I read this for the first time, and I can still remember well its effect on me: I felt literally transported to the inside of the great whirlpool, felt dizzy and drunk with adrenaline. For many years, I thought it had to do with the grandiloquent language, the gothic horror in the story’s subject and narrative style. Today I believe it has more to do with Poe’s brilliant description of the whirlpool’s shapes, movement, and dynamic, with the mention of its “smooth sides” and the use of the word “ebony” to evoke a liquid body, all that spinning and gleaming, the vision of full moon rays hitting the black walls, the “flood of golden glory” pressing who knows what buttons in my deepest consciousness, or in my body.

Daniel Galera’s The Shape of Bones is available August 15 from Penguin Press.

Daniel Galera is a Brazilian writer, translator, and editor. He was born in Sao Paolo, but spent most of his life in Porto Alegre, only returning to Sao Paulo in 2005. He has published four novels in Brazil to great acclaim, the latest of which, Blood-Drenched Beard, was awarded the 2013 Sao Paolo Literature Prize. In addition to writing, he has also translated the work of Zadie Smith and Jonathan Safran Foer into Portuguese.

Beyond the High Blue Air 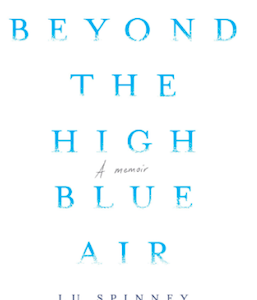 Beyond the High Blue Air