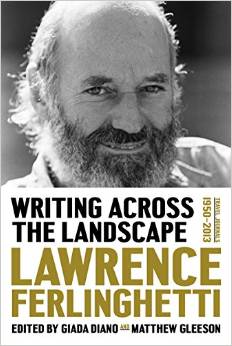 The following is from Lawrence Ferlinghetti’s Writing Across the Landscape, a memoir of travel writing and poetry. Ferlinghetti is a poet, playwright, publisher, and activist; he co-founded City Lights Bookstore and established the Beat movement, or as he explained, "wide-open" poetry.

We fly from San Francisco to Santiago, my wife Kirby and I, meeting Allen (Ginsberg) and changing planes in Panama, in the middle of the night, seeing nothing but bus-station-type Panama airport. My body transited this Canal some 15 years ago on a U.S. Navy troop transport headed for the Occupation of Japan. . . . As navigator, went ashore to Navy Hydrographic Office to get charts, hit swinging door bars on way back to ship, barely made it aboard before ship left Canal. . . . Now we sit in dim waiting room while they juice up the plane. . . . Allen and I cram into a phone-booth-size “photomat” and take pictures of ourselves, mugging it up. . . .

It’s our first trip abroad as poets—an international literary conference, arranged by Fernando Alegría, Chilean poet and professor at UC Berkeley. It’s to be the first big comprehensive meeting of writers from all Latin American countries. And it turns out half of the writers––the most important in their countries––cannot enter the U.S. for political reasons. Let’s not have any of them dirty foreign influences. While we’re keeping things homogenous (like Borden’s Milk), Latin America is striving to homogenize itself enough to communicate across its own continent, exchange ideas, books, etc. . . . It will be the 21st century before they’re at all ready for a United States of Latin America.

The Conference is at the University of Concepción. First night, Allen makes great wild speech in Spanish—reads Whalen, Lamantia, Snyder, with translations by Luis Oyarzún. There is a sense of literary excitement in the cross-fertilizations going on. Zendejas interrupts solemn speech to demand one minute of silence for the death of Alfonso Reyes. Granted. All stand in silence. Five minutes later rises and interrupts again—now demands two minutes of silence. Five minutes later, he demands three.

One day at the Conference, the local Communist Party organizes a tour of writers to go to the minehead at Lota, an undersea coal mine. We arrive just as the miners are coming up from their 12-hour shifts. They come to the surface in little elevator cages, like animal cages in a zoo. The miners’ faces are illegible in the coal dust which coats their bodies, white eyes staring out of black masks. The pay is said to be a dollar a day. They walk undersea for a mile or so to get to the minehead. . . . Naturally the press has been invited by the CP to get our reactions. They thrust mikes in our faces and demand what we think of it. Back at the University they give us a questionnaire. The questions are like such: What do you consider the most important literature of South America? (My answer: The faces of the miners at Lota.) What do you see as the future of South America? (The faces of the miners at Lota.) Whom do you consider the greatest poets in Chile? (The faces of the miners at Lota.) There were twenty questions like that. Same answer for all—published in a big paper in Santiago.

The impression I have is that a great fat omnivorous crab named United States of America is sitting on top of the Pan-American hemisphere, sucking the marrow from its soft underside. The Coca-Colonization of the world. . .

Native Indian woman in the crumbled Church of San Francisco––kneeling, with baby on back in sling, praying out loud to the white images of god at the altar––but it was not just a prayer, it was a loud plaint, a wail in a high girl’s voice, a child’s voice wailing her Let Me Out! Save me from this! Help me to escape from this incomprehensible black mute helpless desperate situation of life! God, god, god! What am I doing here?

La Paz—Miserable, mud-covered dung-hole of humanity at the top of the world, with one fine tree-lined Prado cut through the sink-hole city of decaying Indian beggars, con-men, and German fascists. . . .

Bolivia—4 million inhabitants, of which 3 1/2 million are a slave population—Indians ruled over by 500,000 whites of European extraction. The Indian women wear soft brown derbies with high crowns uncreased; the men wear felt hats and shoes made of old rubber tires.

The Indians may be converted by the Methodist & Catholic missionaries but they really still worship the Earth God. I saw the old god of the earth in the profile of a hillside—buried in the crater/mountain of La Paz, he was face-up—a huge flat outcropping of rock for a nose, green grass on his cheeks and chin, his eye a grim tree.

After dark—Inca raindrops hit the train window shaped like balsa boats, glowed silver against the outside night, and the window became a cloth of silver, a silver mesh.

3 Jesuit padres on the train, all very young, just ordained, in brand new uniforms—new shoes, new cassocks, new linen—2 played cards, drank whiskey poured from wood flask statue of Inca idol, smoked American cigarettes—3rd one did not smoke, play or drink. They were on their way to study for 6 months at Cuzco—had just been at Arequipa where great earthquake just devastated city. How came they to be looking so elegant coming from Arequipa? A copy of a manual of “Christian Perfection” one of them carried was not opened during the trip. They read the “Reader’s Digest” Spanish edition. From Lake Titicaca to Cuzco through a great wild valley, becoming more & more fertile as we descended from 12,000 feet, streams becoming rivers, mud huts becoming adobe houses with red tile roofs inside of adobe walls, the towns growing into bigger towns, all adobe, all tiled. . . . So into Cuzco as night fell, and in the dark roaring of the train a sudden jolting as we ran into great rocks fallen from hillsides onto the tracks. All stopped. The tracks cleared finally, and we went on again, rocking.

Someone had bought a baby fox from an Indian at one of the stops, and he got loose in the car, and no one could get him from under a seat. He bit all hands extended. Finally he was pulled out in a towel.

In Cuzco the Cathedral bells sound like a great forge at six in the morning. Two separate kinds of infernal clanking, shaking the city awake. . . . The Spaniards put so many churches in Cuzco in order to baffle the Incas into servitude.

I don’t stay in the best hotels but I’m a faithful user of their men’s rooms. Swastika on men’s room wall in best hotel in Cuzco. . . .

The cocks crow all night. It must be the end of the world.

Cuzco, ancient Inca capital in the Andes, to Machu Picchu, lost Inca city the Spaniards never found. It took a certain Hiram Bingham from Yale University to discover it around 1915 (and he absconded with a booty of artifacts).

We careen to the stop for Machu Picchu, and tumble into big old bus with wooden seats and a driver in a cowboy hat, with several crucifixes swinging from the rear view mirror, as if he needed them for guidance, and we start up steep grade, up and up, then winding around and around for hours, and everybody silent, hanging on. Finally we lurch to a stop where it seems there’s nowhere to go but into the sky, and we’re here, Machu Picchu laid out in the late sun, and all in a strange silence. There’s no inn or other sign of tourist development, though a government hotel is rumored. “Civilization” hasn’t reached here yet.

I think of Neruda’s “On the Heights of Machu Picchu.” Here and now, nothing but the great tumbled ruins stretched out before us, with one huge jagged peak towering over it all, smaller ragged peaks ranged around, and we stand like dumb wanderers looking down at the spent ruins. We creep among the roofless temples and homes, doorways agape, gullies that once were streets, warehouses fallen flat. Whole fallen city laid out, silent in late sun. . . . Hidden door of the Andes at thirteen thousand feet, seacoast far below. . . . . The sunset reddens. . . .

Some Indians go by dancing, playing their flutes and beating drums.

From WRITING ACROSS THE LANDSCAPE, Edited by Giada Diano and Matthew Gleeson. Reprinted by arrangement with Sterling Lord Literistic, Inc., forthcoming from W. W. Norton and Company, Inc.  Copyright © 2015 by Lawrence Ferlinghetti.

Back to California, Palm Trees on My Mind 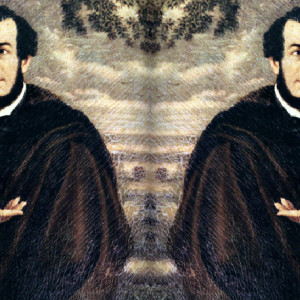