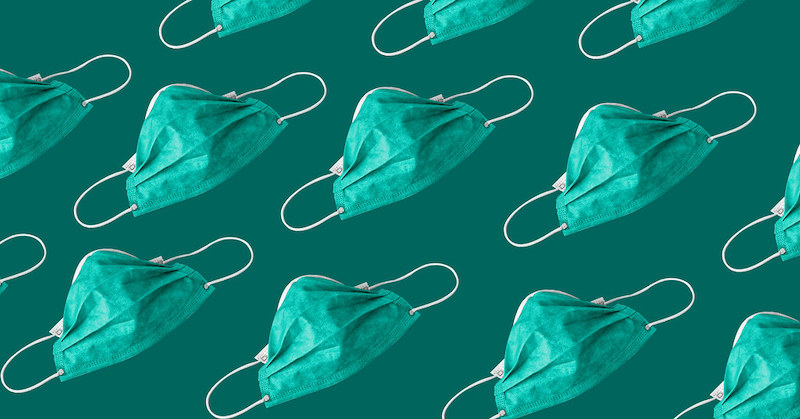 Writing a History of a Pandemic During a Pandemic

Jon Sternfeld On Collective Memory and History as Instruction

Life can only be understood backwards; but it
must be lived forwards.

On the TV, our governor, a man with a boxer’s face and the accent of an SNL character, was at a long table—not standing at a podium, sitting like at a city council meeting. My wife, L, had no phone, no iPad, no second screen in sight. When I started talking to her about something inconsequential, she shushed me. L was watching the governor talk, which was somewhat baffling. She is neither a news junkie nor an Andrew Cuomo fan. She had been following the “numbers” as she referred regularly to the case and death count, but this was different.

Unless Cuomo was announcing some kind of rapid vaccine project, or a last minute jump into the presidential race, I couldn’t imagine how this was newsworthy. I had been following the ins and outs of the Covid-19 crisis like any responsible citizen, but watching a staid local briefing—at noon, no less—was not something I’d been doing. In March, that was not yet a thing. But I had been operating from the old framework and these were strange times.

A couple of days later my editor, Anton, called. He had been watching too. “Have you seen these Cuomo briefings?” he asked. I mentioned I had picked up bits and pieces, but no. I had not been watching them because, well, who does that? Apparently a lot of people. Through a group text with my college friends, I learned that one in New Orleans had been following his mayor and governor, as had another in San Francisco. This was happening on a mass scale and it was happening for a reason. In the land of the blind…

The best leaders get us to care about each other, convince us that our choices matter on a grand scale. In the time of coronavirus, this was not an abstract idea; it was an issue of life and death.

People were choosing to watch their elected leaders because they were stuck at home and they wanted to feel part of something, like citizens banded together. The president was on TV every day too, but not like this. These various briefings told wildly different stories of leadership under fire in the midst of a national crisis, and they were being played out day after day in the public eye. With careful selection and some editing, Anton suggested, it might work as a book.

So the next day, at noon, I sat next to L to watch. Cuomo opened by introducing the array of experts and officials sitting alongside him and played a powerpoint of pure data: curves and percentages and total numbers. Nothing earth-shattering, but Cuomo was humane and wise and empathetic. He looked exhausted and frustrated and properly somber. Throughout the hour-long briefing he admitted to his own worries, offered examples of shared sacrifice and community, and made a point of explicitly separating fact from opinion—a refreshing choice in 2020. Cuomo told stories about his family, brought the right dose of humor, and made us feel like he was going through this all with us. He was filling the 6’ 3”, 243 lb. void in the heart of America.

I called Anton back.

We got to talking about a book that tracked each day since the madness started, using the words of our leaders—governors, senators, congresspeople, and mayors—some of who were stepping forward and gradually accepting this new reality, some of who were failing their citizens and clearly beholden to a different master altogether.

As this year has proven, leaders’ words matter. Whether in the form of speeches, briefings, statements, interviews, or tweets, their words shape what we do. This is especially true when we are all locked inside and craving a shared experience, a steady hand, and a hopefulness that this will end. If we all do our part. The best leaders get us to care about each other, convince us that our choices matter on a grand scale. In the time of coronavirus, this was not an abstract idea; it was an issue of life and death.

As I scoured through what would become thousands of pages of transcripts to patch together a narrative of the pandemic, a problem quickly arose. If we limited the book to elected officials, I couldn’t just include the words of those with whom I agreed. But I also couldn’t construct a story of the virus, its effects, and the country’s response to it with so much false information in it. What was needed was a steady bassline: data, scientists, academics, and journalists. After that, I brought in business leaders and union reps and hospital spokespeople and advocacy groups to track the social, economic, and racial story that was unfolding alongside the medical one.

There was something to be gained by sitting down with each day and asking: Who, from where, said what when?

I started on New Year’s Eve when Dr. Li Wenliang shared a message on social media about seven patients who had come into Wuhan Central Hospital. Then I traced the spread, not just of the virus, but the viewpoints, ideas, and disputes that were spreading as well. I followed it east to Washington State, tracking what was happening, who was warning and who was downplaying, who seemed prepared and who didn’t.

I followed the spread to Europe, the cruise ships, the spikes in New York and New Orleans, communities of color, old-age homes, prisons, and factories. Then I tracked how the virus was spilling over into America itself: its divisions, its class structure, its public debates, its understanding of what personal freedom entailed, what community meant, and what government was even for.

And in doing so, I found that the book seemed to be kind of a solution. Our ecosystem is literally killing us because we never get the big picture view. Everything floods in and we can’t slow it down and it won’t stop. What began as an exercise became a buoy in a sea of noise. There was something to be gained by sitting down with each day and asking: Who, from where, said what when? It was journalism 101 in a single question. As we got to late May, I saw how the larger narrative fit into a five act structure: The Arrival, The Emergency, The Lockdown, The Reopening, The Reckoning.

The book, Unprepared: America in the Time of Coronavirus, did something unexpected for me: it re-created the experience of living it. Every time I read through it—assembling, copyedits, proofreading, in preparation for this piece, I felt like I was going through those months all over again. It was enlightening but also harrowing because it read like a train barreling towards us at full speed. The howling whistle, the brightening light, you could actually feel all of it.

With the murder of George Floyd on May 25, and the outpouring of collective protest in its wake, the picture sharpened even more. For too long, America’s failures had been too easy for many of us to ignore. Things had been going along passably enough that we could get away with not noticing. But we were far from okay. We were the man hit by the train who was caught between the subway and the platform. He was dying, but fine as long as no one tried to move him. If you did, his insides would come pooling out. That’s what Covid-19 has been. The virus was not the train. It was the lifting, the catalyst which spilled our guts all over the floor.

We are currently living someone else’s history and it’ll no doubt be an instructive one.

The story of America is a hopeful story but it’s far from a string of victories. We are as defined by our mistakes as much as our triumphs, maybe more so: the Native American genocide, Dred Scott and Plessy, the Chinese Exclusion Act, the Jewish quota, Japanese internment, the costs of Vietnam, the Challenger’s O-rings and Florida’s hanging chads and “Bin laden determined to strike in US” and the selling of the Iraq War and the 2016 election.

My father used to say to me, in the tone he reserved for irony: “You know everyone who ever lived thought, ‘These are modern times.’”

We are currently living someone else’s history and it’ll no doubt be an instructive one. When I break from the bombardment of each day, I see this crisis the way my great-grandkids will: as the failure that ultimately helped to shape, define, and save their present. 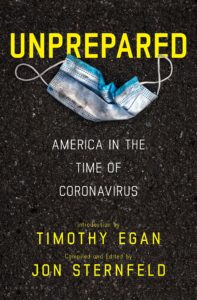 Unprepared by Jon Sternfeld is available via Bloomsbury.

Jon Sternfeld is a writer whose work includes Crisis Point with Senators Trent Lott and Tom Daschle, and Strong in the Broken Places with Quentin Vennie. He lives in New York.

"Walking Each Other Home" 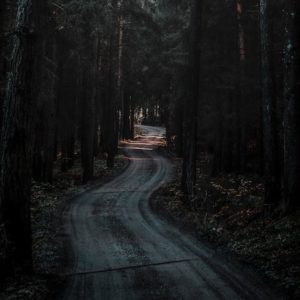 "Walking Each Other Home"

My friend lives on this road the same as me, two hollows down, two gladed mountainsides, briar patches that go without...
© LitHub
Back to top
Loading Comments...