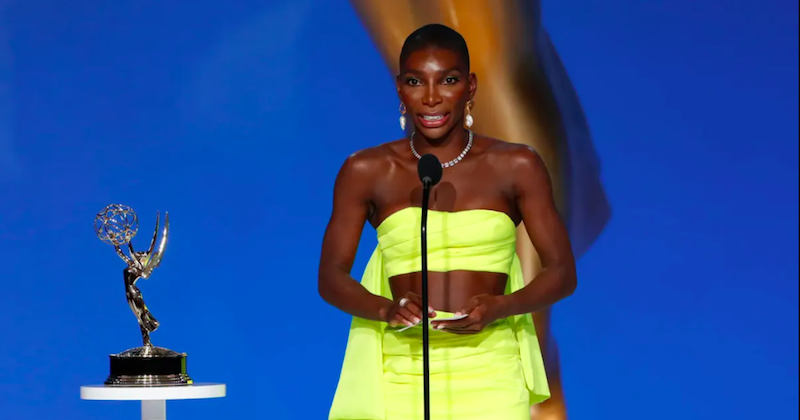 “Write the tale that scares you . . . I dare you.” Michaela Coel has some writing advice for us.

On Sunday night, I May Destroy You showrunner Michaela Coel won an Emmy for Outstanding Writing for a Limited or Anthology Series or Movie. In the context of yet another melanin-deficient awards show that had people tweeting #EmmysSoWhite, it was refreshing (and simultaneously frustrating) that Coel received this much-deserved recognition. According to Variety, Coel is only the third Black creative—and the first Black woman—to have won in the category,

The BBC One and HBO show centers on a breakthrough millennial novelist named Arabella, who is sexually assaulted after a night out in London with her friends. Arabella attempts to drink, party, and sleep the pain away but eventually learns that she must consciously cope with her trauma. Coel based the show on her own harrowing experience.

I just wrote a little something, for writers, really . . . Write the tale that scares you, that makes you feel uncertain, that isn’t comfortable. I dare you. In a world that entices us to browse through the lives of others to help us better determine how we feel about ourselves, and to in turn feel the need to be constantly visible, for visibility these days seems to somehow equate to success—do not be afraid to disappear. From it. From us. For a while. And see what comes to you in the silence.

At the end of her speech, she dedicated the story to “every single survivor of sexual assault.”

Coel recently published Misfits: A Personal Manifesto, a nonfiction work that is part motivational guide and part how-to resource for other “misfits” like herself. In an interview with NPR, Coel commented on how her definition of success has changed: “[Creatives] are climbing this ladder, maybe to prove ourselves to the mainstream world, to earn respect, to be palatable and accepted in the eyes of wider society. But that ladder and that race is not necessarily necessary, really . . . Nonetheless, we climb it.”

Coel’s next on-screen role will be in the highly anticipated Black Panther sequel, Black Panther: Wakanda Forever, which is set to be released on July 8, 2022. Details about her character have not yet been released.