Polly Rosenwaike on Motherhood, a Job Like Any Other

One recent morning, searching for a dermatologist online, I came across a webpage of smiling practitioners, brief profiles beside each photo of the all-female team. The first profile belonged to a pretty young woman with flawless skin, whose last name was the name of the practice. It read, “Mom, wife, doctor. In that order.” Irritated, I scratched my itchy and inflamed scalp.

In a moment, I had to wake my two young daughters; hustle them off to school, including driving the younger one across town; return home to tackle as much freelance editing work as possible before the older one’s school let out at 3:20; run errands with her and drive back across town to pick up her sister and their dad; and then begin the evening’s domestic tasks, while still trying to get a little paid and unpaid (i.e., writer) work done. I didn’t appreciate the priggish reminder of what a woman’s priorities are supposed to be.

In her incisive book, Dear Ijeawele, or a Feminist Manifesto in Fifteen Suggestions, Chimamanda Ngozi Adichie discusses what she calls her two “Feminist Tools”: “The first is your premise, the solid unbending belief . . . [that] I matter equally. Not ‘if only.’ Not ‘as long as.’ I matter equally. Full stop. The second tool is a question: Can you reverse X and get the same results?”

I took my irritation and my feminist tools into the bedroom, where my partner was beginning to confront his own busy day. “Why would you want to tell your patients that you’re putting them last?” I seethed. “Can you imagine a man presenting himself that way?” He agreed with my complaint, while also pointing out that Barack Obama’s Twitter handle is “Dad, husband, President, citizen.” But this only proves Adichie’s point about what gender reversals can reveal.

When the (formerly) most powerful man in the world acts like his job is less important than his familial responsibilities, it’s charming, refreshing. When the mom dermatologist does it, it reinforces the cultural expectation that women who are mothers must embody motherhood as their chief identity. And surely the fact that she’s a mom, and treasures her family so much, must mean that she’s a loving and caring doctor, right?

Like approximately 70 percent of mothers in the US, I work at other jobs in addition to raising my children. It’s been hard, but I’m happy to do it, especially considering the many privileges I’m lucky enough to have: a flexible schedule and a partner with a flexible schedule, the ability to work from home, financial stability, access to quality childcare. But what continues to frustrate me is the way motherhood is often positioned in relation to other work women perform. Though many mothers of young children need to work for financial reasons, the presumption persists that they would ideally serve as their children’s primary caregivers. The belief persists that this must be an innate desire and inclination by virtue of one’s femaleness, one’s motherhood. Quick reversal: when a dad returns to the office after his baby is born, is he expected to lament how hard it is to leave the baby?

As pleasurable and rewarding as it may often be, taking care of children is a job—an important and demanding job—and one that we don’t value enough, considering how poorly childcare workers are compensated. If a woman wants to make the choice to stay home with her kids, she should absolutely be supported in doing so. And if she wishes to reenter the paid work force after years away, potential employers should recognize that, as a mother working in the home, she has been spending her time gaining valuable skills in communication, organization, time management, team building, creativity, and conflict resolution.

But what if a mother does not feel that spending all of her days with her baby or toddler (in addition to her nights and weekends) is the best choice for her, considering her temperament, her aptitudes and expertise, who she is as a person in her own right? Is she a bad mother: selfish, unfeminine, unloving? Must she come to understand—for her own good, as well as the good of her children—that motherhood is about self-sacrifice and is to be cherished above all else?

The New York Times recently published an opinion piece by Caroline Hamilton Langerman, entitled, “I Didn’t Become a Stay-at-Home Mother for My Kids. I Did It for Me.” The tagline: “I was miserable. But sometimes misery can make you a better person.” Langerman describes her experience of frustration, isolation, and exhaustion in taking care of young children around the clock, and her sense of profound disconnection from her former self. I completely identified with those feelings. What puzzled me was why she’d come to the conclusion that this “misery” was the best path for her. Her family could afford childcare, so why be a martyr to the idea that she should do all of it? The underlying assumption, I had to conclude, comes from the culturally ingrained idea that the all-important job of motherhood is supposed to make a woman feel virtuous and fulfilled—and if that’s not your experience, you’d better learn to make it so.

When a dad returns to the office after his baby is born, is he expected to lament how hard it is to leave the baby?

My two daughters are now eight and five. In the years before and after they were born, I cobbled together a patchwork career: teaching writing to college students as an adjunct lecturer, working as a nonprofit administrator, completing freelance editing projects. I did not earn much money from these jobs. I also wrote short fiction, for which I earned virtually no money at all, until I sold my debut collection last year.

From a certain perspective, it might have been best for my family if, during this time before my children entered elementary school, I abandoned these low-paying pursuits to serve as their fulltime caretaker, but it would not have been best for me, and I am an important member of my family. I know that doing this work I find meaningful and stimulating, and am fairly skilled at, gave me a sense of purpose I couldn’t find elsewhere, even if it meant that I often felt frazzled, that my house was a mess, that my kids spent a lot of time with adults other than me.

I happen to believe they have benefited from the loving, engaging, and patient care of these folks—early childhood and preschool teachers, nannies, babysitters, their father. And that spending significant quality time away from my children has greatly helped in my constant return to the role of mother—a role I find to be more challenging, playful, maddening, affection-filled, strange, delightful, and emotionally volatile than any other.

In an interview with the Harvard Gazette last year, the writer Lauren Groff gave a thrilling response to a fairly standard question. “You are a mother of two,” the interviewer noted. “In ten years you have produced three novels and two short-story collections. Can you talk about your process and how you manage work and family?”

Groff replied, “I understand that this is a question of vital importance to many people, particularly to other mothers who are artists trying to get their work done, and know that I feel for everyone in the struggle. But until I see a male writer asked this question, I’m going to respectfully decline to answer it.​”

Groff refused to play the part of the beleaguered professional mother: delivering an itemized account of her I-don’t-know-she-does-it juggling act or offering up a lamentation for what and who had to be sacrificed for her to have accomplished so much. Instead, she points a finger at the gendered nature of the question, the assumptions we still make about mothers that we don’t make about fathers—that they are the ones ultimately responsible for balancing work and family, that they are always moms first.

A few years earlier, in a New Yorker interview that accompanied the publication of Groff’s story “The Midnight Zone,” she said, “I’d made the decision before the boys were born that I was going to feel no guilt or shame about my parenting. I’m a good mother and want to spend as much time as possible with my kids, but I travel a lot, I shut myself away from my family to work every day, I do not do birthday parties, and I went to one play-date in my life and wanted to break the Perrier bottle on the floor and stab myself with it . . . . I think that, in our society, the idea of motherhood is pathologically ill, and even well-meaning people assume martyrdom in a mother. Guilt and shame are the tools used to keep people in line.”

What would happen if those of us who are tired of the motherhood guilt-and-shame game declined to play? What if we proudly devoted our energies to pursuing work that we are well suited for and compensated for, whether financially or in relation to our own ambitions and desires? Would our kids suffer: their teeth rot, their IQs depreciate, their souls wither? Would our society fall apart (ahem, more than it already has due to things that cannot be blamed on mothers)? Or would we be saying to ourselves, to each other, to the other adults and children in our lives that, though time is always limited, we can be good mothers and do the non-mothering work we want to do too?

I didn’t end up with “Mom, wife, doctor. In that order” as my dermatologist. I was assigned to “Hockey Mom. Shoe lover. Sunscreen enthusiast.” I dropped off my daughter at her preschool and then drove to my appointment. Hockey Mom diagnosed the problem immediately. She was straightforward, knowledgeable, and kind. She looked me in the eye; she gave me options. We did not discuss our children. I left her office satisfied that I’d been well served, and I hope she went on to her next patient with the little buzz of satisfaction that comes from performing a job you feel that you—as an individual with particular skills, talents, and affinities—are meant to spend a good portion of your precious time doing.

Polly Rosenwaike is the author of the debut short story collection Look How Happy I'm Making You (Doubleday, March 2019) and has published stories, essays, and reviews in The O. Henry Prize Stories 2013, The New York Times Book Review, Glimmer Train, New England Review, The Millions, and the San Francisco Chronicle. The fiction editor for Michigan Quarterly Review, she lives in Ann Arbor with the poet Cody Walker and their two daughters.

Spring: A Brief History of
a Beautiful Word 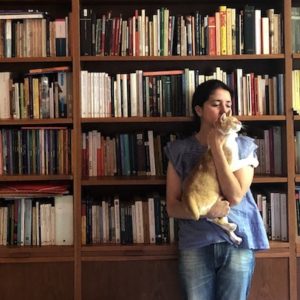 Buenos Aires, Argentina has more bookstores per capita than any other city in the world. It has considerably more than Hong...
© LitHub
Back to top