All photos by Christopher Smith.

The last time I attended a midnight book release, a small, blond, evil child grabbed the book everyone was waiting for, flipped to the last page, and shouted, “Snape killed Dumbledore!” At the launch party this past Monday for Haruki Murakami’s new novel Killing Commendatore at the West Village independent bookstore Three Lives, there were no such spoilers. In fact, judging from a quiz about the first and last lines of Murakami novels, spoilers are not easy to come by in his work. “Until someone came and lightly rested a hand on my shoulder, my thoughts were of the sea,” reads out Ryan Murphy, a bookstore employee. It takes a few guesses before someone gets it right—it’s the final line of South of the Border, West of the Sun (published in Japan in 1992 and in the US in 1999 in a translation by Philip Gabriel).

Even the Murakami superfans in attendance are stumped by “The blood must have already, in its own silent way, seeped inside” (closing sentence of Sputnik Sweetheart, 1999/2001, also Gabriel) and “All that is left to me is the sound of the snow underfoot” (last line of Hard-Boiled Wonderland and the End of the World, 1985/1991, Alfred Birnbaum). But they instantly peg “Again and again, I called out for Midori from the dead center of this place that was no place.” That’s the last line of Norwegian Wood (1987/2000, Jay Rubin), one of Murakami’s most realist works and the one that first won him widespread attention. And even regular fans—like the gangly twenty-something who told me modestly, “I’ve only read half of his books, so I’m not as big into him as some people here”—recognize “When the phone rang I was in the kitchen, boiling a potful of spaghetti and whistling along with an FM broadcast of the overture to Rossini’s The Thieving Magpie, which has to be the perfect music for cooking pasta.” It’s the first line of The Wind-Up Bird Chronicle (1994-1995, 1997, Rubin).

Murakami’s penchant for writing about pasta is so well known that it has spawned a dedicated Twitter account. So far, @SpaghetMurakami has 69 tweets and 1,041 followers. Its pinned tweet, from an interview with Murakami, is: “You know, when you’re making a sandwich for yourself you don’t think about loneliness so much. But when you cook spaghetti, it’s different.” The account also quotes the first lines of Murakami’s story “The Year of Spaghetti,” which appeared in the November 21, 2005 issue of the New Yorker: “Nineteen-seventy-one was the Year of Spaghetti. In 1971 I cooked spaghetti to live, and lived to cook spaghetti.” (The story, another Gabriel translation, ends, “Can you imagine how astonished the Italians would be if they knew that what they were exporting in 1971 was really loneliness?”)

There are only two mentions of making or eating pasta in Killing Commendatore, but Murakami levels up with a sad and sexy pasta metaphor. The narrator says of his wife: “The soft strap of her white camisole was visible beside her collarbone. It looked like some special kind of pasta used in some specific recipe.” When during a quiz at the Three Lives launch party a woman won a large tote bag containing a bag of pasta and a jar of tomato sauce, she got the biggest cheers of the night. 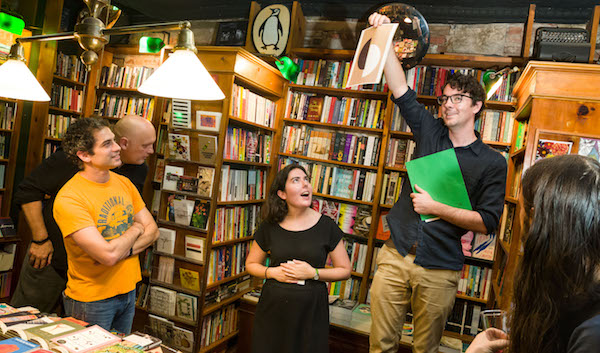 Bookstore staff—Ryan, Miriam, Troy Chatterton, the owner Toby Cox—explain to me that each quiz prize is Murakami-related, although some less obviously. The first prize awarded, to an enthusiastic woman dressed in black, was a bag of yuzu candies. Later, I learned why. The narrator of Killing Commendatore—another story of loneliness and an ailing marriage—tells us in the beginning of the book:

My wife’s name was Yuzu, the name of the citrus fruit used in cooking. Sometimes when we were in bed I’d call her Sudachi, a similar type of fruit, as a joke. I’d whisper this in her ear. She’d always laugh, but it upset her all the same. “I’m not Sudachi, but Yuzu. They’re similar but not the same,” she’d insist.

Nick, an adman who knows almost everything about Murakami novels, won both cute penguin stationery and more yuzu candy. Winning the quizzes was certainly harder than winning at this Murakami bingo board designed by Grant Snider, whose categories include “cats,” “old jazz records,” “ear fetish,” parallel worlds,” “precocious teenager,” “unexpected phone call,” “train station,” “secret passageway,” and “urban ennui.” The questions at Three Lives were not easy ones, but the superfans shot up their hands to answer again and again. Which fictional detective greatly influenced Murakami when he was younger, so much so that he wanted to live like this character?[1] Which of Murakami’s novels have sold in Japan the equivalent of one copy for every household in Tokyo?[2] Who has designed Murakami’s American hardcover book jackets from the early 1990s to today?[3] What was Murakami’s first published book? (Your humble reporter got this one).[4]

“A discussion of different Murakami translators—all of whom are men—makes us wonder if men often translate men and women, women.”

In between the quizzes, I talked all things Murakami with other attendees. Some (like me) were partial to his more realist novels such as Norwegian Wood and Sputnik Sweetheart; others were all-out fans of novels such as Kafka on the Shore (2002/2005, Gabriel), which features, as harukimurakami.com puts it, “fish falling from the sky, conversations between man and cat, a supernatural Colonel Sanders’s ghostly but deeply sensual lovers, a philosophical prostitute, World War II soldiers untouched by time, and much else both strange and wonderful.”

A Chinese-born college student named Chrissy who had taken up running because Murakami wrote about it told me she preferred Taiwanese translations of Murakami to Mandarin ones, since the former were much detailed and the latter were sparse—probably, she added, because in China, censors have to approve translations of Japanese novels. Killing Commendatore has already run afoul of censors in Hong Kong, where it was deemed “indecent.” A discussion of different Murakami translators—all of whom are men—makes us wonder if men often translate men and women, women. 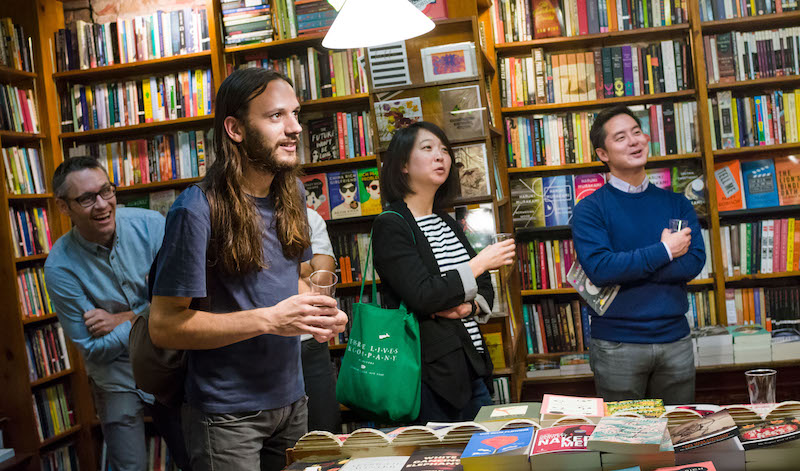 On the lighter side, given Murkami’s ailurophilia, there was significant crossover fandom for a 2016 book entitled Shop Cats of New York by cat blogger Tamar Arslanian and Instagram pet photographer Andrew Marttila, featuring “forty of New York’s favorite felines,” who skulk around city landmarks such as the Algonquin Hotel and Bleecker Street Records. According to Nick, Japanese tourists sometimes retrace the “Shop Cats of New York” trail, hoping to get a look at these famous felines. This inspired talk of Murakami tours of Tokyo: an man named John in an orange t-shirt told us about the baseball game he’d been to at Tokyo’s Jingu Stadium, where, during a game between the Yakult Swallows and Hiroshima Carp, Murakami realized he was going to be a novelist.

Everyone has been asked to vote for their most-loved Murakami book, and toward the end of the night the results are announced. Two are tied for second place: Norwegian Wood and another realist novel, Colorless Tsukuru Tazaki and His Years of Pilgrimage (2013/2014, Gabriel). First place is also a tie but between two of Murakami’s most surreal: Kafka on the Shore and The Wind-Up Bird Chronicle, which features a missing cat, the battle for a woman’s soul between her husband and evil brother, the horrors of Japan’s campaign in Manchuria during World War II, and spaghetti. The Wind-Up Bird Chronicle was published in Japan in three separate books—longer works are usually broken into volumes there—and Toby’s partner Yuko Uchikawa and I have a very literary discussion about whether this practice of breaking novels into volumes affects the way that authors think of their writing. Do Japanese authors think of their novels in terms of installments, or as one big work? 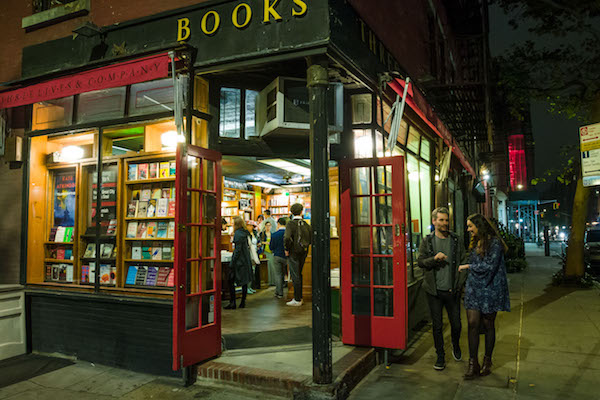 At the stroke of midnight, Killing Commendatore goes on sale. I finish off the evening by chatting to a Swedish portrait painter, Patrik Graham, who’s looking forward to reading the novel because the protagonist himself is also a portrait painter, and a musician, Eunbi Kim, who creates what she calls “Murakami Music.” Eunbi blends music that Murakami mentions—Chopin, Nat King Cole, the Beatles, and more—with theatrical readings from his novels, mainly about his many piano-playing characters (another Murakami obsession).

I head out the door of Three Lives, clutching my heavy tome, the latest addition to my strange library (it’s a Murakami reference, look it up). I may not have won yuzu candy or penguin stationery, but I have a vastly enhanced knowledge of the author, some new superfan friends, and a whole new book of his to read. I flip to the first page of Killing Commendatore. “Today when I awoke from a nap the faceless man was there before me. He was seated on the chair across from the sofa I’d been sleeping on, staring straight at me with a pair of imaginary eyes in a face that wasn’t.” Classic Murakami.

How to Spend a Literary Long Weekend in Atlanta 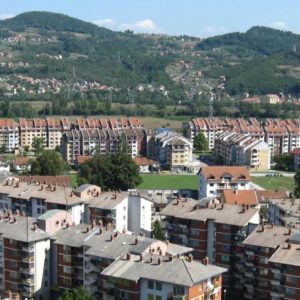 I once gave a lecture in Doboj, in Bosnia-Herzegovina. Like the names of the other cities in which I spoke on that tour—Tuzla,...
© LitHub
Back to top
Loading Comments...