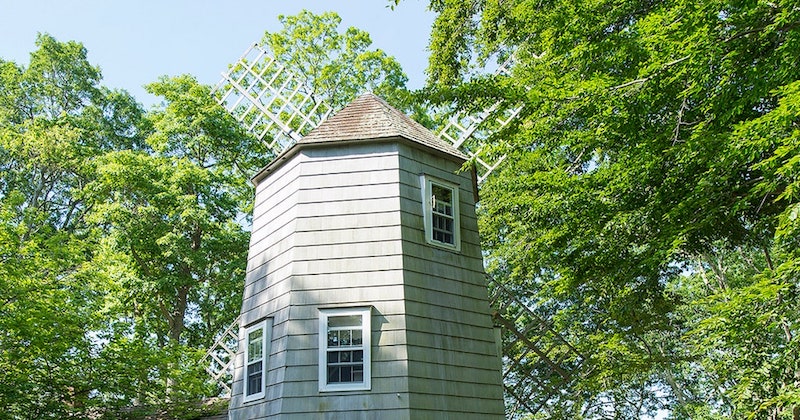 Need a secluded getaway with writerly flair? Have $11.5 million on hand? You’re in luck: Amagansett Windmill House, famously occupied by Arthur Miller, is finally up for sale after years of temporary renting.

Windmill House, built as a functioning windmill in the 1850s, was renovated and converted into a living space a century later by Samuel Rubin, founder of Fabergé cosmetics; now, it’s a two-bedroom, one-bath house, with an adjoining studio and two-car garage. It’s located on 5.5 acres of land, suitable for property expansion—or just a nature-shrouded experience.

Windmill House itself is completely hidden from the road. Celebrities through the years have been drawn to the privacy the property offers: Miller and Marilyn Monroe famously stayed at Windmill House in 1957 while hiding from New York City paparazzi. Monroe reportedly prepared for her role in Some Like It Hot at Windmill House.

And if befriending Alec Baldwin is a project of yours, great: according to listing agent Bobby Rosenbaum at Douglas Elliman Real Estate, Baldwin lives nearby. All in all, sounds perfect for some very specific needs!

CORRECTION: This post has been updated to reflect the fact that Kurt Vonnegut did not, in fact, stay in the Windmill House, but rather in a small house nearby.