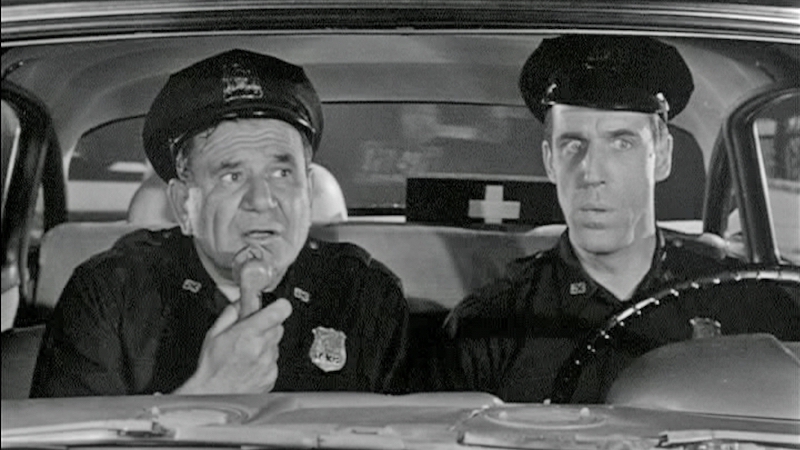 William Faulkner’s favorite TV show was a sitcom about dopey cops in the Bronx.

Fun fact: toward the end of his life, William Faulkner’s favorite television show was an NBC sitcom about two very silly cops, Gunther Toody (Joe E. Ross) and Francis Muldoon (Fred Gwynne AKA Herman Munster), tasked with patrolling the fictional 53rd precinct in the Bronx, despite the cra-a-zy shenanigans that its citizens got up to. Though Faulkner famously refused to buy a television set himself, he did make a friend who had one—James Silver, a professor of history at the University of Mississippi—and wouldn’t turn his nose up at going over to his house and mooching off his set, if his stories were on. “[F]or two months in the spring of 1962,” Silver wrote in Running Scared, “he and Estelle came out to our house every Sunday evening, to watch his favorite television program, Car 54, Where Are You? Sometimes they stayed for Bonanza.” (According to Silver, once when he was discussing the movie The Bad Seed, in which a lost penmanship contest drives an eight-year-old to murder, Faulkner commented that “It would make a great plot for Car 54, Where Are You?” Ah—sure?) Anyway, the theme song, if you want a taste of what the show is like, goes like this:

There’s a holdup in the Bronx,
Brooklyn’s broken out in fights.
There’s a traffic jam in Harlem
That’s backed up to Jackson Heights.
There’s a scout troop short a child,
Khrushchev’s due at Idlewild
Car 54, Where Are You?

Watch the first episode here (and pretty much all of them on ye olde YouTube):