I write in praise of difficulty in writing—specifically difficulty in the novel form. Why? Well, not least because of the Modernist direction my own fiction has taken since I began my Umbrella Trilogy seven years ago—but also because I believe that in the contemporary era, with the novel under assault from digital text and other more compelling narrative forms, only soi-disant “difficulty” can preserve the form’s unique capability to both describe the contours of our brave new world, and enfold the reader in them. What has struck me about the reception of my own works—and those of others of the “new difficult” school of writing such as Eimear McBride—is that while critics may praise them, they feel compelled to place a health warning on our texts: “difficult,” with the minatory subtext—an echo, perhaps, of Der Steppenwolf—that “this book is not for everybody.”

This seems both patronising for these critics’ readers, and a rather lame form of what sociologists term “professional closure”: an act of circling the wagons of demarcation, such that only those inside can be allowed a valid opinion. Novelists certainly feel a downgrading in our cultural capital—but I’d wager critics feel it a great deal more. So, just as academics indulge in grade inflation, because their customers (sorry, I mean “students”) must always be right—so, in the literary realm, critics feel obliged to inflate the level of “difficulty” in contemporary texts, in order to flatter their increasingly sub-aspirational readers. True, there’s no doubt that in an era of cultural over-abundance, when a few keystrokes can—as if you were some cultural Midas—deliver to you all the literary, filmic and televisual riches the wide world has to offer, the notion of a “difficult” novel becomes almost exponentially harder to sell. But perhaps this figuration gives the game away: difficult novels have never been cultural artefacts you hard sell to anyone; their very existence is predicated on the distinction between cultural and financial capital that, under existing neoliberal conditions, is being comprehensively annihilated. No, a difficult novel has always been something readers aspire to, even if that aspiration only took the form of buying a leather-bound volume from the Book of the Month Club and leaving it to gather dust on your shelves. Unfortunately, I believe that aspiration is now comprehensively waning, as the novel moves from the centre stage of Western culture to its wings. Of course, people will object along these lines: “Joyce’s Ulysses only garnered a smattering of writers during his lifetime—and considering it’s regarded by many critics to be the most important novel of the 20th century, it’s hardly attracted that many since his death…” However, it’s worth considering how different the times were—Ulysses was banned in many countries for obscenity, while literacy and general education levels were far lower in the 1920s.

Nowadays, millions of people—at least notionally—are educated to graduate levels, and one would’ve expected this to inculcate them with a positive zest for challenging prose—but this doesn’t seem to be the case. When I get going in this vein, my 16-year-old son says: “Face it, Dad, you’re just an old man shaking your fist at the cloud.” Yet I don’t regard myself as opposed to the new media technologies in any way at all—nor do I view them as “bad,” let alone as cultural panopathogens. I’ve no doubt that human intelligence will continue to be pretty much the same as it has heretofore—but the particular form of intelligence associated with book-learning (and all that this entails) is undoubtedly on the wane, with the “extended mind” of the smart phone increasingly replacing our own memories, and the hive-mindedness of the web usurping our notions of the canonical. I shan’t belabor the point, but it’s worth thinking about the impact of the so-called tyranny of film on contemporary cinema: the length of shots have become shorter and shorter, while the editing technique of cross-cutting between them in order to compel viewers’ attention has become ubiquitous. Arguably, this is similar to the concentration in the literary realm on “page-turners” with characters that are “relatable”—both narrative mediums are looking for ways to make their consumers’ experience more facile.

The Modernist style of writing—if, loosely, this is taken to comprise the combination of some form of stream-of-consciousness, or mono-perspectival narration with the continuous or historic present—is pretty much the antithesis of the “tyranny of film,” yet I’d argue it’s the style that’s fit for the purpose of conveying exactly our experience of modernity—one characterised by an overweening sense of both media-saturation and compulsion. After all, the most salient features of the contemporary world are its relentlessness and its atemporality—the web bundles up everything into a permanent Now. So, what drove Joyce, Woolf et al. towards this style was naturalism: a desire to render in language the effects of modernity on human perception and cognition. Of course, since language and human experience can never be fully commensurate, the Modernist turn—in common with the linguistic turn in 20th-century philosophy, which it so closely mirrors—can end not just in mere difficulty, but in the polysemous and polyglot cul-de-sac of Finnegans Wake: “Fools top! Singty, sangty, meekly loose, defendy nous from prowlabouts. Make shine on the curst. Emen.” Or, alternatively, in the chipping and spawling away at the semantic foundations of language that we find in later Beckett.

My own work is pretty straightforward in comparison. Here’s a line, taken completely at random, from my novel Phone:

Do you believe? he’d once asked Fiona, and she gave him a look… actions speak louder than words. The only time the question occurred to her sacrilegious husband was when they were at church parade on Sundays, and awash in the gentle surges of orthodox piety… give us this day our daily dead.

I suppose one of the things a reader might find difficult with this is the italics, which I employ in order to indicate the moment at which inchoate thought turns into words. But I expect you, dear reader, realized this pretty immediately, given the first italicised clause actually enacts this idea. I daresay a fair few readers, even from this very brief excerpt, were able to identify the milieu being described—a “church parade” is something undertaken, in Britain at least, only by the military. Now here’s a couple of lines taken at random from Joyce’s Ulysses: “Although the former (we are thinking of neglect) is undoubtedly only too true the case he cites of nurses forgetting to count the sponges in the peritoneal cavity is too rare to be normative.” The syntax here is a little strange, true, but the sentence—while having all the hallmarks of a non sequitur—is nonetheless comprehensible, so long as you realize Joyce is parodying Herbert Spencer, who is in turn parodying the nativity (this comes from the Oxen of the Sun episode).

Indeed, such regressive displacements of narrative voice in Ulysses drive some critics to the postmodern insight that the text cannot be conceived as having an author at all, only an “arranger.” There’s none of this ontologic jiggery-pokery in my humble trilogy: you know whose mind the text is being focalized through, even if the transition between these minds is via a cheese-sandwich-portal. What my prose does share with the High Modernists is the abandonment of the conventional distinction between the diegetic and mimetic—all is shown, and nothing told by an impersonal third-person narrator. I also fuse external dialogue and internal monologue, while juxtaposing these with descriptive passages—the whole contained within the matrix of the continuous present. However, unlike Joyce, whose genius allowed him to shift the focalization of a single sentence—moving into and out of a consciousness—with the smooth fluidity of a virtuoso trombonist, I tend to stay in one psychic place, at least at the sentence level.

Then there’s the vexed matter of allusion and references with which the reader may not be familiar—and therefore find too “difficult.” The host of allusions to actual events (as well as the concrete reality of Dublin) that took place on June 16th, 1904, would by no means have been readily grasped by readers of the novel when it was first published—let alone now! I advise students I teach Ulysses to, to tackle the entire text three times: once cold, once line-by-line with an accompanying book of allusions (which is actually longer than the novel itself), and a third time, once they know the allusions, and so can apprehend the full compass of Joyce’s prose. Joyce’s inclusion of unknowable allusions is, I think, one of his great signposts, as a Modernist, towards the then-emergent realm of full-mediatization: Joyce intuited that in the future the text would jump the bounds of the codex—as has proved to be the case: nowadays, if you’re reading digitally and don’t get an allusion, a few of those Midas (or Tiresias)—like keystrokes will unlock the riddle. But as adverted above, Joyce was also trying to perfect a form of naturalism. If you think hard about apprehending the content of a human mind in, say, 1958 (let alone 1904 or 1858), it surely becomes pretty clear, pretty quickly, that the vast amount of quotidian data it contains—from street names to pet names to current advertising jingles—would be wholly unknowable to you, especially appearing in the allusive garb of “thought.” It’s the old canard: a period movie set in the 19th century that’s made in the 1970s always feels very… 70s. By the same token, novelists setting scenes in the past tend only to allude to aspects of that past that their readers already know (or at least are semi-aware of).

True, some of my trilogy is set in the more distant past—and includes allusions nobody could be reasonably expected to grasp—but much of it takes place, loosely, in the contemporary era, and as such I’d expect a general reader to “get” them without recourse to web searches. However, I’m not averse to web searches: following Joyce’s lead, I wanted to enact in the very form of my trilogy, the way our own reading has indeed broken out from the confines of the codex; this, to me, seemed an appropriate way to continue the Modernist experiment. So, if this is particularly difficult for readers, it can only be because they have abandoned that aspiration which made a far more difficult text—Ulysses—the pinnacle to which every evolved reader used to aspire. Modish neuroscientists do such things as put people in brain-scanners while they’re actually reading—then marvel (as we should too), at how many areas of the cortex are involved in turning those enigmatic black marks into the stuff of our imagination and experience. But some texts are clearly going to be a better jungle gym for the mind than others—and just as you never put on much muscle mass with a limp-wristed workout, so no one ever got smart by reading… Dan Brown.

Will Self’s Umbrella trilogy including Umbrella, Shark and the recently published Phone are available from Grove Press.

In Awe of Seabirds at the Edge of the World 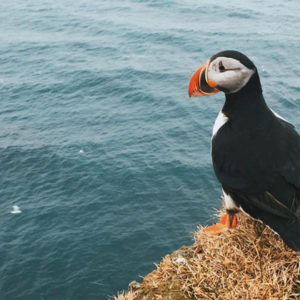 In Awe of Seabirds at the Edge of the World

One day, on a steeply sloping grass shelf on the Shiant Isles in the Hebrides, two or three hundred feet above the surface...
© LitHub
Back to top