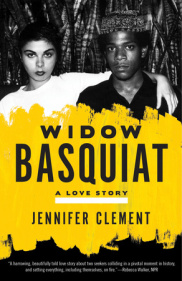 This excerpt is from Jennifer Clement's Widow Basquiat, the story of the short-lived, obsessive love affair between Suzanne Mallouk and Jean-Michel Basquiat. Clement is former president of PEN Mexico and is the author of three novels and several books of poetry.

She irons the clothes, folds his clothes, places them in the same order on the shelf—the red sweater is folded this way and placed above the red shirt. She places the soap at an angle on the sink and always places the towels in the same order 1-2-3. She irons one shirt five times. She makes the bed three times and irons the sheets. If a sweater fades in the wash she cries. She never speaks and only answers questions or speaks in a panicky monologue:

“My mother was a spy in the war. They took her to see a woman with transparent skin. They could see her heart beating in there and her lungs and blood. They could see her eyeballs turning. This was a military secret. Nobody knows about this. And they would give the woman food— turnips, oranges, bread—and watch it all go down into her. This was a military secret. I heard about her when I was five and I thought she must have been very beautiful like a larva, but very scared. I kept looking at my own stomach and wondering what was in there. I chewed care- fully. My mother said she was a kind of Venus or virgin.”

At first Jean-Michel thinks this is funny and puts some of her words in his paintings. Then he tells her to shut up. He paints Self-portrait with Suzanne. He paints her speaking her chicken-chatter, “PTFME E a a a R M R M O AAAAAAAA.”

They do coke six or seven times a day. He tells Suzanne she can only wear one dress. It is a gray shift with white checks. He tells her she can only wear one pair of very large men’s shoes. He does another line of coke. Suzanne walks clunk- clunk-clunk, her feet wading in the shoes, around the loft. He tells her she can’t wear lipstick anymore. He says she can only buy groceries and detergents. Then he says no, he will buy them. He does another line of coke and paints Big Shoes, a portrait of Suzanne in big shoes. He calls her Venus. He says, “Hey, Venus, come and kiss me.” He says, “Venus, go get us some coke.” He writes “Venus” into his paintings and says Suzanne is only with him for his money.

Jean-Michel sticks black paper over all the windows so that they won’t know if it is day or night. “The day is too light,” he says.

Suzanne finds a place to live under a small table, like a small cat that finds a hiding place. From here she watches Jean- Michel paint, sleep and do drugs. He picks up books, cereal boxes, the newspaper or whatever is around. He finds a word or phrase and paints it on his board or canvas. A few times a day he crawls under the table with Suzanne and gives her a kiss on the forehead. Sometimes he pulls her out, has sex with her, and then puts her back under the table and continues to paint.

Sometimes Suzanne weeps a little and Jean-Michel says, “Shut up, Venus. I know what it is like to be tied up and fed, with a bowl of rice on the floor, like an animal. I once counted my bruises and I had thirty-two.”

Suzanne moves from under the table into a closet in the bedroom. In here there is a green trench coat, a pair of moccasins, black and pink pumps, a tin frying pan, a super­market plastic bag full of bills, two large boxes of chalk. Under one moccasin Suzanne finds a small box of birthday candles.

THEY DO NOT KNOW HOW TO DRIVE A CAR

Shortly after Suzanne moves into the Crosby Street loft Jean-Michel takes her to Italy. He is having a show at the Emilio Mazzoli Gallery in Modena. Neither Jean-Michel nor Suzanne knows how to drive a car so Jean-Michel pays to bring Kai Eric along to drive them around.

In the airplane Jean-Michel continuously gets up to do some coke in the bathroom. He says he has to finish it up before he goes through customs in Europe. He says he wants to open up the emergency door exit and jump on the clouds.

Suzanne has hepatitis. She cannot lift up her arms.

Jean-Michel sits beside her; he kisses and licks one of her arms.

“Beautiful arms,” he says. “Venus, I have to paint your arms.” He takes a blue marker out of his pocket and paints on Suzanne’s arm. He paints her humerus, ulna, radius and carpus. He writes “animal cell” on the inside of her wrist. He draws a ring around her finger.

SUITCASES AND OTHER BAGS

She is very quiet. In one suitcase she places her fishnet stockings, polka-dot skirt, dresses, shoes and winter coat. In another bag she packs her passport and plastic jewelry. She takes a small bag of coke out of the refrigerator and hides it inside her hair, fastening it with hairpins. She leaves the one thousand dollars that Jean-Michel gave her in the loft. She leaves her typewriter, her coat and her hairbrush. She knows you must always leave your hairbrush behind— it’s voodoo.

Outside she sits on the sidewalk with her bags all around her. Six punk, hip kids walk by and ask her what is wrong and she tells them, “My boyfriend doesn’t love me anymore. He has other girls. He is famous.”

The boys take her to their house in Alphabet City. Suzanne sleeps on the couch and they give her American cheese sandwiches for four days. She gives them the coke that is hidden in her messy hair. They watch her take it out. They say she is a magician.

One day she stands up and says, “Thank you, boys. I need to get a job.”

She gets three jobs-working at a secondhand clothing store, an after-hours bar and typing scripts for Eric Mitchell, the underground filmmaker.

“Are you coming back? Come back. I couldn’t find you. Where were you? I told Rene to take care of you and not to let you leave,” Jean-Michel says.

Maybe it is the day to go buy some heroin … The girl takes a cab past Houston Street and buys some dope. She opens the package in the cab, bends over and sniffs it off of her lap. She thinks about the words she loves: rabbit, rain, Rome, Rammellzee, rocket. She giggles to herself when she thinks that dope makes her mind wind up and around alliterations. Her neck and hands feel warm like fur.

A few weeks later she runs into Jean-Michel when she is buying some dope on the Lower East Side. Jean-Michel takes her for a ride in his limousine. They sniff the dope in the car. Jean-Michel says, “Burroughs was a junkie, Parker was a junkie . . . it is the road to genius.” At a red light he gives one hundred dollars to a skinny black bum.

“Do you want some money, Venus?” he asks Suzanne.

“No. I never have wanted your money, Jean,” she says.

Adapted from WIDOW BASQUIAT. Used with the permission of the publisher, Broadway Books, an imprint of Penguin Random House LLC. Copyright © 2014 by Jennifer Clement. 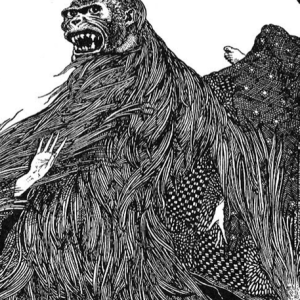