Why You Shouldn’t Get Into a Fight With Jane Smiley

At a literary festival a few years ago, I found myself in the back seat of a car with Pulitzer Prize-winning author Jane Smiley. We talked briefly about Clint Eastwood, the Carmel Valley where she lives, and horses. In a few minutes of casual conversation I had the creeping sense that I was only just smart enough to realize how much smarter she was than me. But there was no feeling of a hierarchy between us, she listened and observed in the manner of the perpetually alert. As our ride came to an end, I watched her walk away from the car. I remember having an odd thought, that if I ever tried to pick a fight with Jane Smiley I’d certainly lose.

To tell the story, I have to go back to when I was in school in the 1980s. I was taught that Neanderthals were lower on the evolutionary ladder, a more primitive version of us. But in 2010, something astonishing happened. Neanderthal bones found long before revealed new things. They contained DNA that, once extracted, allowed researchers to publish the first draft of the Neanderthal genome. It showed that many people of European and Asian descent have inherited between one to four percent Neanderthal DNA. Not only did modern humans make contact with Neanderthals, we interbred with them and have the inheritance to show for it. They were our close cousins.

When I started writing my Neanderthal novel in 2012, the scientific community had mostly accepted that Neanderthals were more human than we previously thought. But in popular culture their reputation had yet to be restored. Many people still thought of them as hairy, grunting, knuckle-draggers who had minimal intelligence. I decided that my Neanderthal novel would use the new science to shape the characters and story.

I finished a first draft of a manuscript that was about 300 pages long. The moment I typed the last word, I knew something didn’t ring true. Convinced that scientific accuracy would bring salvation, I consulted academics, read thick textbooks, put myself through a crash course in genetics, found obscure books, and sourced modern research to fill in the gaps in the historical record.

But after four years of research and writing, I didn’t have anything that felt publishable. At that point, I broke up with my novel and didn’t ever want to think about Neanderthals again. Instead, I turned to easier methods of passing the time. I mindlessly surfed the Internet. It was then that I realized someone had picked a fight with Jane Smiley.

On Smiley’s telling, she had participated in a radio interview with British historian Niall Ferguson. He asserted that history had a kind of hierarchy. Historical novels were made up, whereas non-fiction held the more valuable truth. Smiley took to the pages of The Guardian to write her retort. In the article, she defined the different demands of history and historical fiction, “since a novel is a story, it must be complete, and since a history must be accepted by the reader as accurate, it must be incomplete.”

By this point, I was well versed in the history and science of Neanderthals. What we know about them is based on artefacts that are at least 40,000 years old, like bone fragments, ancient DNA, imprints in rock, and fire char. There are many things that are lost to time and that we will never know. As the archaeologist in my novel says, “a relationship, a feeling, or a glance—it’s the things that don’t fossilize that matter most.”

Smiley’s words gave me permission to take a necessary leap and fill in the gaps beyond my research, but that proved difficult too. My prose was still wooden and lifeless. Neanderthals felt too far away.

One day I sat with a blank Word document on my computer. As the typing wasn’t going well, I glanced at a photograph that I kept pinned to my office wall. It was of The Lovers of Valdaro, a famous pair of skeletons who were found intertwined, as if locked in an embrace when they died 6,000 years before. Staring at the photo, I could imagine a connection between the two skeletons. The skull of one is positioned as if looking into the eyes of the other. The finger bone of one seems to be resting under a chin. Though they have been gone for so long, their gestures seem familiar. I saw myself in that photograph, the warmth of a lover’s body, the touch of skin, and the heat from his eyes. They lie in death in a way that expressed how they might have felt in life. As I stared, their experience started to intertwine with mine. I wondered about my own death and how it might go. Jane Smiley’s motto for writing historical fiction is, “you are there.” I was in that photo. 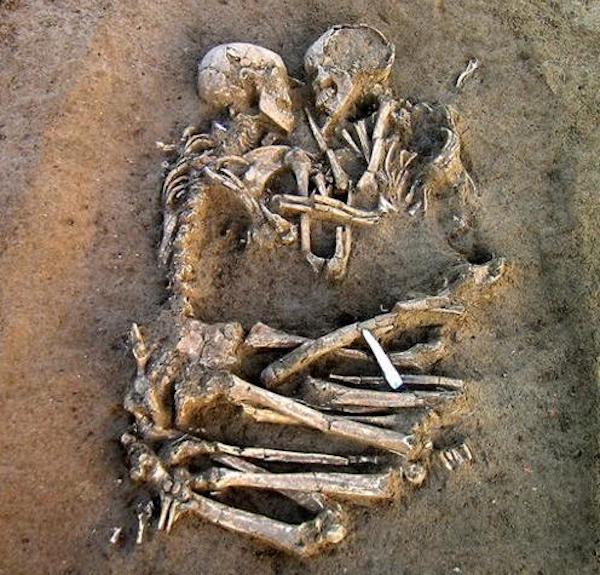 The Lovers were probably between 18 and 20 years old. In the grave, the female was found with a blade along her thigh. He had a flint arrowhead near his neck. Those are the historical facts. But what happened to them? With no signs of trauma, the blade and the arrowhead might have only been objects that were buried with the bodies. Maybe the Lovers were injured or poisoned and died in an embrace, their last breaths taken together—like an ancient Romeo and Juliet. It can’t be ruled out, but it’s much more likely that they were placed into their position after death. Only informed speculation can complete the story.

My new ability to graft emotions onto skeletons wasn’t enough. My draft remained empty of something. I turned back to Smiley’s piece, “history… is based on the author’s theory of what happened… and if the research doesn’t fit into the story, then the text has no logic.” While I had done my research and had a theory about what had happened to the Neanderthals, I hadn’t yet made this the backbone of my novel. It was a scary leap to take. It required me to assume the role of an expert and trust that I could construct the facts into a plausible form. A risk of that size might even open me up to attacks by conservative historians named Niall. But by then, I had read Smiley’s article so many times that I felt her strength. I decided to write with her courage. My Neanderthals came alive.

In the end, I’d had to do years of research in order to earn the right to make things up. I imagined that the skeleton on the left of my photo of The Lovers of Valdaro was a female Neanderthal. She lifted her hand, as if to press her palm against his. I could feel the heat of her skin, so much like my own. Time collapsed. Lungs breathed new air into ancient things. The two bodies warmed. Blood flowed. I could feel a character as if I knew her, a female about my height. She would smell strange because she ate bison meat. She might be pregnant and I could imagine how that experience could help her make contact with the modern humans of her time. I knew what was different about her, but more importantly what might be the same.

Smiley’s article about writing historical fiction is like an artefact to me. In the way that fossilized bones reveal new truths about Neanderthal DNA, her work gives new meaning each time I return to it. Through her words, I was able to find a way to bring my Neanderthals to life. And this, as Smiley says, is the reason to write a historical novel, “to imagine simultaneously what she and her subject are thinking and feeling as human beings, no matter how far apart they are.”

Claire Cameron's first novel, The Bear, became a #1 national bestseller in Canada and was long-listed for the 2014 Baileys Women's Prize for Fiction. Cameron's writing has appeared in the New York Times, the Globe & Mail, the Los Angeles Review of Books, and Salon. The Last Neanderthal is available from Little, Brown. She lives in Toronto with her husband and two sons.

The Books That Made Your Favorite Writers Want to Write 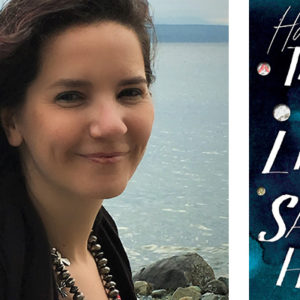 Hannah Tinti is the founding editor of One Story, an award-winning literary journal that publishes a single short story each...
© LitHub
Back to top
Loading Comments...