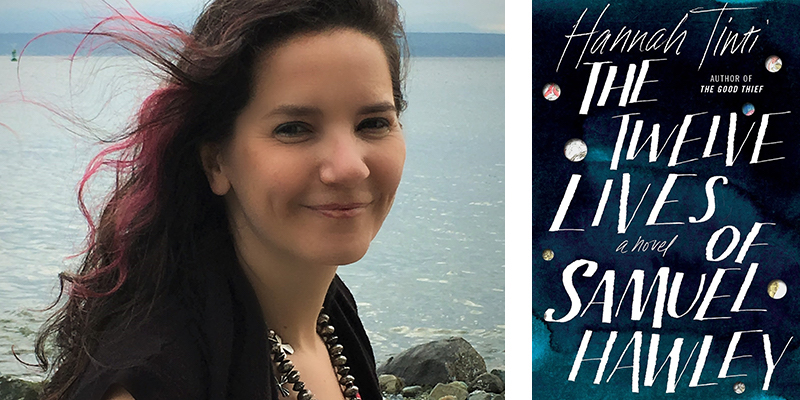 Hannah Tinti is the founding editor of One Story, an award-winning literary journal that publishes a single short story each month. Tinti won the Center for Fiction First Novel Prize for her debut, The Good Thief, which follows an orphan as he dives into a world of crime. Her newest novel, The Twelve Lives of Samuel Hawley, focuses on a father-daughter duo accustomed to shooting guns, packing up their lives quickly, and not speaking about how much they miss Lily, Hawley’s wife and Loo’s mother, who died when Loo was a baby. The book begins with reformed criminal Hawley taking off his shirt to reveal 12 bullet holes covering his body; it then toggles between the present-day life of Loo and Hawley and the stories that accompany these wounds. Tinti drew from her own upbringing to create the fictional town of Olympus, and she deftly brings the reader into the gloomy, gritty, small-town world of northern Massachusetts. It’s a sprawling, cinematic saga of family, crime, and innocent intentions that pushes against the ideas of what it means to be good, bad, and beloved. I sat down with Tinti at the Old American Can Factory in Brooklyn, where we spoke about love stories, shooting guns, and growing up around witchcraft.

Kyle Lucia Wu: The Twelve Lives of Samuel Hawley develops like an epic love story, and although there are romantic relationships throughout, the real focus is the familial, father-daughter love between Samuel and Loo. Did you set out to tell a story that didn’t hinge solely on romantic love?

Hannah Tinti: When I write, my process is not purposeful. The seed of the book came from me wanting to write a love story, but it was actually more of a romantic love story. I’d already written a little about this father and daughter going clamming, and I had this idea it would be about the daughter falling in love. I started writing about the father figure and as I was describing him, I found the scars on his body. I became really curious and I thought, “let me tell how he got one of these scars.” When I told that story, which is the first bullet chapter, it opened up this idea of what if I could tell a man’s whole life just through these tiny moments? The father-daughter story ended up growing along with that story.

At one point, I thought about taking Loo out, but I started realizing that the story was about the two of them. So I made it more of a mystery, following her as she’s finding things out about her father. I think that happens to all of us with our own parents. We don’t really know them when we’re kids. We have this idea of them and along the line, we start fitting pieces of the puzzle together. Once we know a little more about their history, and when they start showing more of their human side to us, we see their flaws, we see their mistakes, and the relationship grows and develops. How do you solve the mystery of your parent when your parent has so many secrets? It makes it a little bit more exciting.

KW: The idea of double selves often came up in this novel. Both Loo’s mother Lily and her grandfather Gus have the sides pre-sobriety and after, and with Hawley, the reader is always wondering: is he a father or is he a criminal? They aren’t mutually exclusive, but they’re set up to contrast each other.

HT: I was talking to someone else about the bullet chapters the other day and they were saying, “wow, he’s a really bad criminal. He’s always screwing up and getting shot!” And I was saying, “no, you only see the episodes where it went wrong.” You have to imagine all the years around that. He has this violent side to him that feels very natural and right, and part of him is trying to contain that and come to terms with it. That’s something Loo inherits. In the beginning, she has those violent episodes, and she’s trying not to go overboard—she’s trying to learn how to contain that part of herself as well. That’s a challenge for a lot of people, learning how to deal with emotions in a productive, nonviolent way.

KW: What makes a good parent or protector or hero—is it good behavior or is it unconditional love, even when it’s messier?

HT: I wanted to push the edges of what it means to be a hero. It’s one of the reasons I tied Hawley’s story to the 12 labors of Hercules. When I reread the myths, I realized that Hercules was a total asshole. A total jerk. If we look at how he got each of those labors: he murdered people, he tricked people, he lied to people, he did terrible things. But he’s remembered as this pinnacle of strength and honor. I wanted to play with that. About three-quarters of the way through the book, Hawley goes through his dark period. He is really dangerous, he goes on this murder spree, he murders people he probably didn’t need to murder, but he’s scorched earth at that point. I remember my editor was saying, “Oh God, I almost don’t want to like Hawley. It makes me want to turn against him, should we tone that down a little bit?” And I knew I wanted the reader to have that moment of feeling conflicted that they are still rooting for this guy who is so dark.

But his one redemption is the love for his daughter and the fact that he will do anything for her. This transition happens as the reader learns more and more about his relationship with her and the moments where she saves him, where you realize that she is the real hero of the story.

KW: When he’s going through that dark period and checking the names off the list, he’s saying it’s for Loo, but it feels flimsy, thinly-tied to Loo—like he’s assigned these tasks for himself.

HT: At this time, he’s just completely given himself over to the dark side. Up until that part he’d always had that dark part of himself, but he’d held it back, or tried to reason with it, or found ways to counterbalance with it in his own mind, that he wasn’t 100 percent bad, and the only thing that pulls him back is her.

KW: In The Good Thief, you also deal with crime and finding unconventional families. What about these worlds interests you?

HT: You have to find the people who will be there for you no matter what, and maybe that’s a biological family, maybe it’s not. As far as the criminal stuff, it just feels really natural to me. When people tell me, “Oh, your stuff is so creepy and weird, all this violence and darkness,” I just tell them I grew up in Salem, Massachusetts. My high school job was at the Salem Witch Dungeon; all my friends worked at the witch museum or wax museum or the witch house. You either worked at a factory making board games, you worked at a coal plant, or you worked doing witchcraft stuff. That was my childhood. I used a lot of details from that area that were real, although I made up the town of Olympus so I could change the details.

KW: Did you do research for the book on the areas like fishing, environmentalism, or Greek mythology?

HT: I don’t live my life by Greek mythology or anything, but I am really interested in how stories are told and retold. So many stories from today are tied to ancient myths: we’re all telling the same stories in different ways. I did do some research on fishing and environmentalism, and I also made a lot of it up, then checked it and read more books on it. I had to learn how to shoot a gun too.

KW: Where did you do that?

HT: There’s a place on 20th Street where you can go and sign and they’ll show you the basics of shooting a 22-caliber rifle. It’s really strange there; all the guns are chained to the ground so you can’t turn them on each other—which is good, I guess; you don’t have to worry about someone shooting you. And I had some friends who belong to a gun club just outside the city. I went up there and this one guy let me shoot everything, just to get the different feel of handguns, revolvers, automatics, shotguns, sniper rifle, things like that. I wanted to get the physicality of it right, because it’s completely not my world.

KW: How much of the story did you have worked out before writing it fully?

HT: It changed as I was writing it, but once I knew there were 12 bullets and bullet chapters, it came together more. When you’re working on a story, it’s like a big jigsaw puzzle you’re trying to put together. As the book became more complicated, the wall in my apartment was kind of crazy, strings and cards and stuff like that to put it all together and keep track of how I was moving through time. I feel that when I’m working on a story, it’s like someone has created a big jigsaw puzzle I’m trying to put together. You created the puzzle, so the answers are somewhere in your brain—the answers to fix it are all these somewhere in your mind, but it’s a total mystery. You have to slowly piece it together.

And that can be frustrating, particularly for a person like me who is an editor and used to that more mathematical side of the brain. Over the years I’ve learned to really trust that subconscious, not knowing where something is going and letting yourself go to that weird place, to follow your weird obsessions.

Why You Shouldn't Get Into a Fight With Jane Smiley 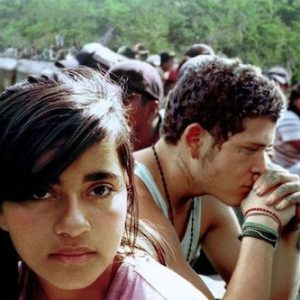 When she was 13, Liliana Velásquez imagined that her adobe house, in the tiny village of Villaflor, Guatemala, had been...
© LitHub
Back to top