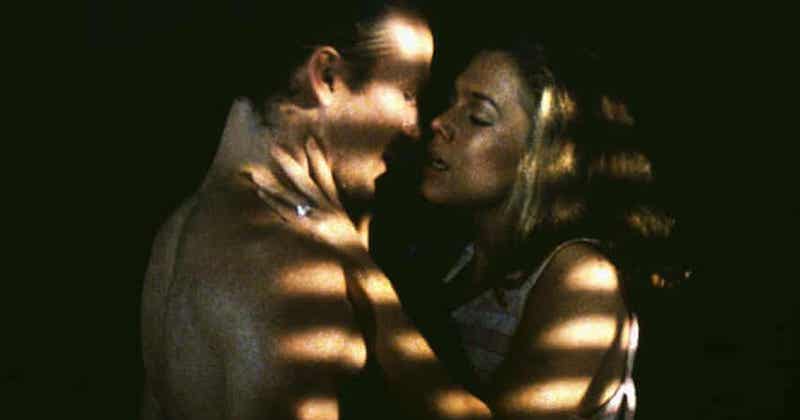 While there have been a few notable additions to the canon over the past two decades (In the Cut, Unfaithful, Gone Girl, When the Bough Breaks…em… The Boy Next Door) the sweaty heyday of the erotic thriller has been over for some time now. Its Golden Age was actually quite a lengthy period, beginning (I would argue) in earnest in 1981 with Bob Rafelson’s remake of The Postman Always Rings Twice and ending in 1996 with the Wachowskis’ Bound. (I will also accept 1998’s Wild Things as an end point, for those of you who prefer a messier climax to your cinematic eras).

Partially inspired by the 1944 film Double Indemnity (itself an adaptation of James M. Cain’s 1943 novella of the same name), Body Heat—which Kasdan wanted to have “the intricate structure of a dream, the density of a good novel, and the texture of recognizable people in extraordinary circumstances”—is a hallucinatory masterpiece of pure filth. It’s the story of Ned Racine (William Hurt, sporting one of cinema’s great pornographic mustaches), a bored small-time lawyer and amiable womanizer who spends his days shooting the breeze (or lack thereof) with his exuberant prosecuting attorney pal, Peter Lowenstein (a tap-dancing Ted Danson), and his nights picking up cocktail waitresses on the Miranda Beach boardwalk. It’s on one of those lazily prowling nights that Ned catches the eye of Matty Walker (Kathleen Turner, in her very first role), a breathy, Bacallian beauty married to a wealthy-but-domineering older man (Richard Crenna, aka Colonel Trautman from the Rambo movies). Ned and Matty engage in some delightfully R-rated banter over snow cones, fall into bed together, and, before you can say “we can’t go on like this,” come up with a plan to murder Matty’s shitty husband.

Even if you took a censor’s machete to the sex scenes, Body Heat would still be a top drawer noir (albeit a rather brief one). The script is dynamite, the third act twists are twisty, the lush cinematography and Sax n’ Synth (n’ wind chime) soundtrack combine to create a palpable mood of languid, sleazy peril. The supporting roles—from Danson’s ebullient-but-concerned lawyer foil to Micky Rourke’s sweetly loyal ex-con—are remarkably well-developed. And then there’s the sweat. Everyone in this film sweats constantly, vigorously, and visibly, regardless of setting, situation, or time of day. The denizens of Miranda Beach, a town suffering through both a merciless heatwave and an epidemic of broken air conditioners, are bathed in sweat 24/7. It beads from their foreheads in courtrooms, stains the backs and armpits of their linen suits in diners, coats every inch of their skin as they stare through the black distance at an old hotel engulfed in flames. They even sweat while reclining naked in bathtubs full of ice water. They’ve all very hot, and very bothered, and none more so than Matty and Ned.

Matty: My temperature runs a couple of degrees high, around a hundred. I don’t mind. It’s the engine or something.
Ned: Maybe you need a tune up.
Matty: Don’t tell me. You have just the right tool.

Every time Hurt and Turner appear on screen together, clothed or otherwise, the titular heat could melt steel beams. Right from the jump they’ve got the kind of uninhibited, almost vulgar chemistry of two people who know exactly where things are headed. They’re wolfish with one another’s bodies, they way they eye and salivate and ultimately devour. Even the manner in which they run their fingers over one another’s torsos in the spent aftermath calls to mind apex predators idly licking wounds sustained in a tussle. The looming specter of Matty’s mob-affiliated husband finding out doesn’t deter them. Being caught in flagrante by Matty’s horrified niece can’t cool their jets. The (extremely justified) suspicions of the entire town aren’t enough to put even an temporary kibosh on their nocturnal sexcapades. It’s not love, not really. It’s lust, hot-blooded and unquenchable and doomed.