When young people make the terrible, confounding decision to end their lives, it’s shocking. And when the deceased and their family are people you know, the ground shakes under your feet. You remember yourself at 12, or 16, or 19, in states of seemingly petrified despair that didn’t end in that irrevocable choice but could have, and you know that whatever forces run the universe—forces that had seemed benign or controllable, and could be ignored except on Yom Kippur or in the Confessional—are fickle, and you have no power over them.

The 19-year-old son of one of my closest friends jumped ten stories to his death, a bright, generous, warm-hearted, popular boy with a girlfriend and numerous talents. It still seems impossible. He had everything to live for. He wouldn’t—couldn’t—have done it. Yet it happened, a choice was made—one that overturns your notion of choice-making systems in the universe, whatever faith compels you to brush your teeth in the morning and go off to work. In confronting such a choice, you are forced to ask yourself uncomfortable questions. How was such a thing possible? Why did it seem possible to him? And most terrifyingly, what questions had he been asking himself, and answering?

Another, perhaps less pressing question: after the initial shock, why put yourself again through that confounding anguish by writing fiction about it? After all, life is bad enough, what with global warming, wars in Syria, Iraq, Afghanistan, Donald Trump and Kim Jong-un blustering and fumbling their way towards nuclear war. “Only trouble is interesting,” Janet Burroway tells student writers in her popular textbook, Writing Fiction, but some troubles threaten to breach the fourth wall, the membrane of story, of purposeful unreality, that allows both reader and writer to experience terrible things with merely virtual suffering, where we are able to encounter things like war and murder from the safety of an armchair, in the shade, with our iced coffee.

I just published a book that centers on a pledge to commit suicide made by four high school seniors. My good friend says he can’t read it, that he doesn’t want to relive the experience of his son’s death—and who can blame him?

But the phenomenon of teenage suicide has become increasingly difficult to ignore in the wider culture, a distressingly common subject for newspaper stories, talk shows, statistical reports. The median age for suicide is decreasing, the rate increasing; and teens reportedly now are as likely to die from suicide as from car accidents—not only in America but all over the world. Representations of teenage suicide also have proliferated—most recently, with the Netflix series, Thirteen Reasons Why, based on the book by Jay Asher.

One of the most enduringly notorious representations in fiction of thanatos—the death drive—is Goethe’s Sorrows of Young Werther, a sensation on its publication 350 years ago. Young Werther brought its young writer instantaneous fame and spawned a spate of copycats, of young men dressing in the blue coat and yellow vest or trousers of Goethe’s suicidal protagonist and, in some alarming cases, going on to blow their brains out as Werther did, to be discovered with the book in their pocket—in the first recorded instance of the copycat phenomenon, later called the Werther Effect. In Goethe’s autobiography, he confesses to obsessive thoughts of suicide. He describes a morbid bedtime practice: “Among a considerable collection of weapons, I possessed a handsome, well-polished dagger. This I laid every night by my bed, and before I extinguished the candle, I tried whether I could succeed in plunging the sharp point a couple of inches deep into my heart.”

Like Werther, Goethe loved and was rejected by a woman named Charlotte. Like Werther, Goethe became good friends with Charlotte’s worthy and well-intentioned husband. Goethe even gave Werther his own birth date. “I have lent my emotions to [Werther’s] history,” he wrote shortly after the book was finished.  The act of writing seemed to have quelled Goethe’s suicidal thoughts, or at least rendered them less urgent. Multiple sources deem Sorrows to have been cathartic for Goethe, liberating him from the depression that accompanied his romantic failures. In his autobiography Goethe calls Sorrows a “general confession” which left him at its completion “again happy and free and justified for a new life.”

In writing about teenagers and suicide, I’ve realized my desire to know and understand these people—these children. I write for almost the same reason I read—not to tell the world what I know but to find out what I don’t, and what I need to. By creating characters that I come to understand more deeply, by tracking their passage through whatever interesting rigors come to mind while holding true to a sense of emotional and narrative logic, I discover things.

Albert Camus asserts that a human being’s most important choice, and the one truly serious philosophical question, is whether to live or die. The idea jolted me when I heard it for the first time at age 15 or 17. Not being a teenager who ordinarily asked herself such questions—busy with the immediate concerns of how I came across to other people as I walked down the hall holding my bag of books to my chest—I was naively struck by the idea that there were people in the world who thought differently.

To be or not to be: the question shoos away trivia, and draws a person to the spiritual center of the world.

Sharon Solwitz’s latest novel, Once, in Lourdes, is available now from Spiegel & Grau.

Sharon Solwitz is the author of a novel, Bloody Mary, and a collection of short stories, Blood and Milk, which won the Carl Sandburg Literary Award from Friends of the Chicago Public Library and the prize for adult fiction from the Society of Midland Authors, and was a finalist for the National Jewish Book Award. Solwitz teaches fiction writing at Purdue University and lives in Chicago with her husband, the poet Barry Silesky. 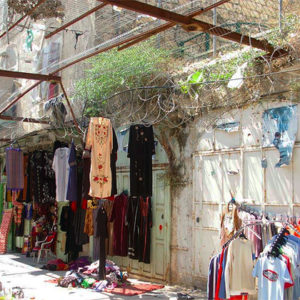 I’m sitting in my office in New York, lingering over the draft of an email I need to send to the staff. It explains...
© LitHub
Back to top