When the Counterculture Optimism Receded, Things Got Ugly

Stephen Paul Miller calls the 1970s the uncanny decade—the “undecade.” Things were particularly weird in these years, which remain shrouded in America’s cultural memory, as if by a kind of smog. One reason for the haze is the period’s elusive placement between the highly overdetermined 1960s—often considered by historians to last well into the subsequent decade—and the more garish icons that come to the fore later in the 70s, like disco and punk, Pong and Star Wars, Jonestown and the Bicentennial.

Indeed, liminality is a key characteristic of the early 70s. Radical and transformative forces unleashed in the 60s mutated and dissipated into much broader segments of culture and society. One no longer needed to be an inhabitant of San Francisco, the East Village, or Ann Arbor to explore the creative maelstrom of drugs, uncorked sexual experimentation, and the alternative worldviews associated with radical politics or the occult revival. Thresholds were everywhere.

At the same time, and in stark contrast to the previous years, the horizon of individual and social possibilities abruptly narrowed. Whether left, right, or center, the nation drifted into a Slough of Despond perhaps unprecedented in American history. In polls taken at the end of the 70s, people looked back at a decade of “disillusion and cynicism, helplessness and apprehension,” a list we might as well round out with disorientation, paranoia, boredom, and frustrated rage.

I suspect that one reason we find ourselves dependably amused by tacky 70s fluff like shag carpet, massive sideburns, and smiley face buttons is that we need to keep the trauma and perplexity of the era at bay. This is despite (or due to) the fact that so many of the era’s bummers resonate with our own: fears about terrorism and environmental collapse, surveillance paranoia, political cynicism, foreign war fatigue, and a pervasive apocalyptic undertow that tugs beneath an over-heated, desperately sexualized, fantastical, and often bleak popular culture.

Radical and transformative forces unleashed in the sixties mutated and dissipated into much broader segments of culture and society.

The gloomy backwash of the 70s is perhaps best memorialized in the nihilistic and existential tone of so many Hollywood films of the era, populated with errant cops, ominous conspiracies, lonely lovers, and twilight cowboys drifting hard. An air of sweeter and more passive melancholy can also be heard in the plaints of the chart-topping singer-songwriters who emerged from the ferment of late 60s folk-rock. In contrast to the collective “bands” of the youth movement, these performers crystallized their songs around a lonely or isolated individual trying and failing to find connection.

Artists like Joni Mitchell, Neil Young, James Taylor, and Leonard Cohen told bipolar tales of anxious interiority and hedonic restlessness, of opportunities squandered or snatched away. In 1971, Don McLean had a huge hit with “American Pie,” a tune whose melancholic mood and obscure lyrics—meant to eulogize Buddy Holly and the early years of rock ’n’ roll—“evoked intense feelings of collective loss, of ruined innocence and diminished potency.”

For people marked by the counterculture, this melancholic aftermath can be laid at the feet at one pervasive reality: the collapse of the 60s dreams of massive collective transformation, whether political or spiritual or both. This swift and bitter sunset was captured by Hunter S. Thompson in the retrospective rumination that opens his classic book Fear and Loathing in Las Vegas, from 1971. Standing on a hill outside the city of sin, his head momentarily cleared from the weirdness he would chronicle like no other journalist of the era, Thompson reflected on the “long fine flash” of his generation.

Describing the millennialist convictions that enflamed so many, Thompson testified to the “fantastic universal sense that whatever we were doing was right, that we were winning . . . We had all the momentum; we were riding the crest of a high and beautiful wave.” Looking west across the Nevada desert, toward the Golden State that nurtured so much of the counterculture, Thompson writes that, with the right kind of eyes, “you can almost see the high-water mark—that place where the wave finally broke and rolled back.”

Though we should be wary of large generalizations, the notion of “the” counterculture remains a useful way to characterize an essentially generational culture of rebellion, nonconformity, and creative experimentation with both individual and social possibility. That said, the Movement was always moving in different directions at once. Perhaps the most essential difference in the goals of the 60s counterculture was the split between outer struggle and inner transformation. The tension between these agendas—which also overlapped in a myriad of ways—inform the distinctions between New Left activists and psychedelic hippies, between Berkeley and the Haight, or between what one journalist called the “Fists” and the “Heads.” But however you divide the tribes, everyone felt the wave roll back.

I suspect that one reason we find ourselves dependably amused by tacky 70s fluff like shag carpet, massive sideburns, and smiley face buttons is that we need to keep the trauma and perplexity of the era at bay.

The Fists arguably began to lose their way in 1969, when the Students for Democratic Society, the spine of New Left activism, dramatically dissolved into a riot of rival factions, including the soon-to-be bomb-tossing Weathermen (a name quickly gender-corrected into the Weather Underground). By the end of 1970, many countercultural leaders—including Huey Newton, Angela Davis, John Sinclair, and the Head ideologue Timothy Leary—were in courtrooms, jail, or exile. In the spring of that year, National Guardsmen shot and killed four unarmed Kent State students protesting the American presence in Southeast Asia.

Shock and anger impelled millions to continue their protests over that summer, but by the end of the year, mass demonstrations had declined in numbers, force, and media presence. Though organized gatherings against the war continued, many Fists felt they were pounding against a wall; in Todd Gitlin’s words, “helpless fury turned to spleen or withdrawal.” While new and dynamic forms of social and environmental struggle were opening up, the Movement as a collective field of radical possibility began to fade.

The dawn of the 70s found the Heads in retreat as well. Following the muddy collective ecstasy of the Woodstock festival, the hippies faced their own grim symbolic boomerang at the Altamont Free Concert in December 1969, when Meredith Hunter was stabbed by a crew of Hell’s Angels and three others died in a train wreck of a gathering. And while too much can be made of Altamont, nothing can match the symbolic and existential punch provided that same fall by the Tate-LaBianca murders and the subsequent arrest and trial of Charles Manson and his peculiar family of glassy-eyed, knife-wielding girls and boys.

With his mystic hippie rhetoric and evident charisma, Manson perfectly embodied middle America’s fears about the amoral violence, mind rot, and hedonic excess that lurked in the permissive, go-with-the-flow ethos of the counterculture. Though embraced by some in the underground as a radical antihero, Manson not only bloodied the Aquarian dream in the minds of the silent majority but forced thoughtful freaks

to reckon with the pathologies and moral drift of the scene. It became altogether clear that no one was escaping history any time soon. 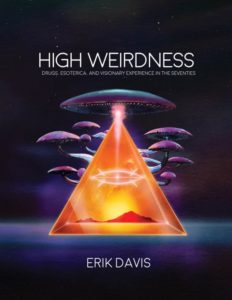 Erik Davis is an American journalist, critic, podcaster, counter-public intellectual whose writings have run the gamut from rock criticism to cultural analysis to creative explorations of esoteric mysticism. He is the author of Techgnosis: Myth, Magic and Mysticism in the Age of Information, The Visionary State: A Journey through California's Spiritual Landscape, Nomad Codes: Adventures in Modern Esoterica, and High Weirdness: Drugs, Esoterica, and Visionary Experience in the Seventies. 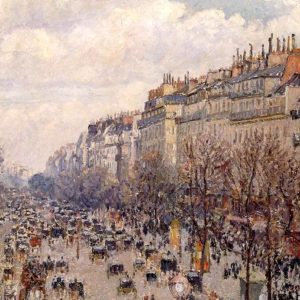 When I arrived at the Gare du Nord from Charles de Gaulle last January, it was early in the morning, and I had to pee desperately,...
© LitHub
Back to top
Loading Comments...