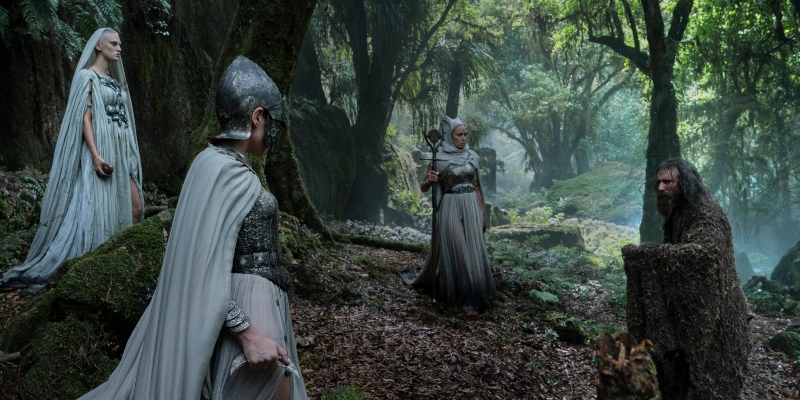 DYLAN: At long last, we have arrived at the first season finale of The Rings of Power, and it’s packed with twists, reveals, and calls-forward to the events of The Lord of the Rings. We might as well begin where the episode does, with the big mislead.

The trio that’s been stalking the Stranger (Daniel Weyman) catches up to him and identifies him as their master, Sauron. It’s been clear that the Dark Lord has been among us all season, with a number of characters being possible suspects, but I don’t think either of us bought this. I’ve been preparing for the Stranger to turn out to be someone other than Gandalf (simply because that would be fun), but to lift the veil on Sauron in the teaser of an episode rather than the meat didn’t feel convincing to me.

JENNA: I’m frankly a bit insulted by how little effort they seemed to put into making this feel plausible. We have a cadre of nameless, unexplained evil beings show up and say “You’re Sauron!” with no context and then beat the snot out of him because he makes a dust devil, none of which reads like how an actual reveal would play out. I admit to laughing aloud when he shouted, “I’M GOOD!”

DYLAN: I agree that the Stranger exclaiming “I’M GOOD!” is a big unintentional laugh moment, but I otherwise enjoyed the show’s first big magic fight between him and Eminem/The Nomad (Edith Poor). Visually, I think it struck a fun balance between being physically violent and being floaty and otherworldly. The killing blow, in which the Stranger transfigures his foes’ flesh into glowing blue moths but leaves their bones behind, is undeniably rad. It’s also like nothing we saw in the films, which is nice, because so much of The Rings of Power’s visual language is lifted directly from Peter Jackson.

This episode features some particularly egregious examples of pandering to the audience’s memories of the film trilogy. For example, Galadriel’s (Morfydd Clark) ride into Eregion perfectly matches the composition and camera movement of Gandalf and Pippin’s arrival at Minas Tirith in The Return of the King. I don’t mean to say that this shouldn’t be permitted—Jackson himself lifted a few iconic shots directly from Ralph Bakshi’s 1978 animated film—but The Rings of Power does it too much, particularly in episodes directed by producer Wayne Che Yip.

JENNA: We get it, the movies are masterpieces that not only still hold up but are also enshrined in the general viewing public’s consciousness. Do the show’s creators truly have so little faith in their own product that they can’t let anything stand without turning to the camera and pointing directly to their references two to five times per episode?

This really does feel like the end of one book in a series of novels.

Anyway, all that being said, the reveal of Halbrand (Charlie Vickers) being the actual Sauron was actually pretty good, and I wish we’d spent more time this season building that unease and tension. I am a little beside myself that Galadriel only just now decided to do one speck of research after deciding he was the vague “King of the Southlands” based on a pouch, but that’s honestly in-character for this version of her and I won’t dwell on it. Instead, I’ll think longingly of the version of this show where Halbrand/Sauron ingratiates himself in Eregion over the course of more than half an episode.

DYLAN: I’m actually a fan of Galadriel’s revelation. Throughout the season, she’s been so intensely focused on accomplishing her own ends that I can believe she wouldn’t second-guess anything that served them. She needed Halbrand to be the King of the Southlands in order to recruit her Númenorean invasion fleet, so she didn’t question his birthright. She wanted a companion and confidant, so she granted him a blanket pardon for his shady past. Now, she finally has some time (a few months, presumably) to actually stop and think and put the pieces together, and it’s too late.

It’s an interesting development, because she’s only just gotten over her impulse to blame herself for things that aren’t her fault, and now everything that happens from here on out is actually on her head. She shifts directly into despair, resigned to play her part in Sauron’s plan until some opportunity comes to subvert it. And so, we get the titular Rings of Power.

JENNA: I’m not sure if it’s despair and resignation we’re seeing in her. Since the Three Rings had to have been completely untouched by Sauron’s influence in order to truly be the Three, and it does seem like he left after their confrontation, I feel like she might instead be shouldering the weight of what she now understands to be the opening moves of the war she’s been seeking all this time.

While I find it to be a deeply flawed piece of storytelling, I still want it to succeed.

The problem for me really is a matter of pacing. I’ve complained in the past about the telescoping of the text’s timeline, but here I’m putting that aside to focus on the show’s timeline. You said that Galadriel has had “a few months, presumably,” but there has been genuinely no sense of time since the show started. How long has it been since Galadriel set sail? How long did that forge actually take to build? How long did the experiments with mithril take?

The Harfoot plot feels like it covered maybe a week or two, while in Eregion an entire huge structure was built from the ground up, and Númenor had time to argue about Galadriel, raise an army, ship them out to distant shores, fight, regroup, and come back. There was even time for Elendil’s daughter, whose name I genuinely forgot and whose motivations remain entirely absent, to go from being accepted as an apprentice to having risen through the ranks enough to be chosen as one of the King’s potential portraitists.

DYLAN: The Empire Strikes Back Effect is definitely felt here, where different storylines seem to take place in different temporalities but must overlap in order to keep any one subplot from dominating or disappearing for too long. For what it’s worth, though, I think each of the season’s storylines came to a natural stopping point over the past two episodes. This really does feel like the end of one book in a series of novels.

As we wrap up our season, I want to make sure we take some time to touch on the things we’ve considered discussing but that never fit neatly into any particular episode recap. For my part, I want to speak in praise of Bear McCreary’s original score. I’ve been a fan of McCreary’s since he arrived on the scene in 2005 with Battlestar Galactica; he and The Lord of the Rings are a match made in heaven. The show may lean a bit too heavily and too literally on his recurring leitmotifs sometimes, but the themes themselves are splendid and evocative. The soundtrack album for Season 1 is enjoyable as a work in itself, which is rare in the modern, sound design-driven era of screen soundtracks.

There are so many new fantasy stories being told every day that deserve time on the big and small screens.

JENNA: As for me, I want to say how deeply frustrating it’s been to be so disappointed in this show. I might have been trepidatious when The Rings of Power was announced, but I was also hopeful and excited. The avalanche of purists delirious in their rage over the earliest promos of Galadriel in armor or Black actors playing Elves and Hobbits and Númenoreans made me root for this show’s success even harder.

Instead, I wound up meeting almost every episode with some level of dismay and exasperation. These have all been genuine reactions. And yet, by voicing them, I have found myself at risk of being lumped in with the kind of nerds who rejected this show out of hand for being “woke.” To be explicit, for too long Western fantasy has been uninviting at best and actively hostile at worst to fans of color, and it is overdue that these fans get to see themselves represented in the genre. The problems with the show are, to me, many and varied, and none of them have to do with the “politics” of the casting.

I’m heartened to see how many people have really enjoyed The Rings of Power. While I find it to be a deeply flawed piece of storytelling, I still want it to succeed. The more that the Powers That Be get returns on big fantasy narratives, the more the door opens to further entries in the canon. There are so many new fantasy stories being told every day that deserve time on the big and small screens, and if this gets even one of them greenlit, I’ll call it worthwhile.

DYLAN: Regardless of the quality of the show itself, Jenna and I have had a lovely time sharing our viewing experience with each other and with you, the reader. We’d like to extend our appreciation to all of you, and to our hosts here on Literary Hub, for exploring Middle-earth with us this season. It’s been…[ominously] a gift…

How Best to Resist Capitalism and Racism? Wake Up, Rest, and Dream

Talking to Myself: On The Image Book and the Legacy of Jean-Luc Godard

How Best to Resist Capitalism and Racism? Wake Up, Rest, and Dream