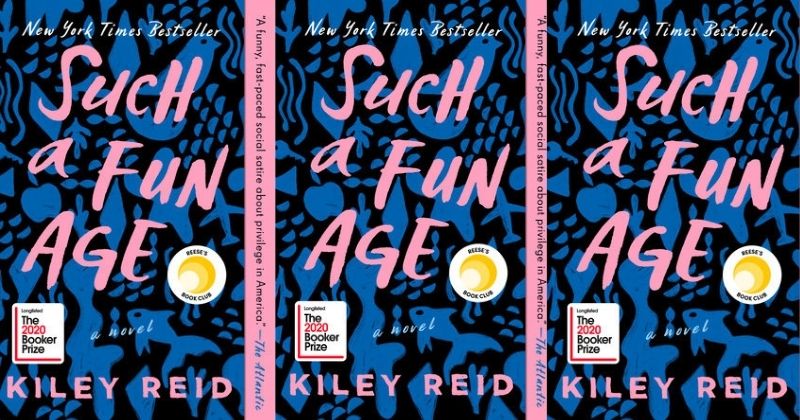 Why we need more depictions of Twenty-Something Black Girls Just Figuring Shit Out.

Pop culture depictions of, for lack of a better term, Twenty-Something Girls Just Figuring Shit Out, rarely include anyone who isn’t white. Despite living in New York City, the girls of Girls were white. Two Broke Girls? Again, white. Frances Ha was an NYC-set movie where Black and Brown people were rarely seen, and never heard. Reality Bites? I guess existential crises at the Gap can only feature white women. (I still have a soft spot for that one. Winona forever!) And so, as a 30ish-Woman Still Trying to Figure Shit Out, I’m always delighted (relieved) to find a deviation from the norm. Shout out to Insecure, which blessed us with Jay Ellis and Kendrick Sampson and Alexander Hodge and—

Someone once said, “All relationships are transactional.” In Kiley Reid’s debut novel, Such a Fun Age, this statement is examined in the context of domestic care, race, and romantic relationships. Twenty-five-year-old Emira Tucker, a Maryland-born Black woman, shares similar qualities with other Twenty-Something Girls Just Figuring Shit Out. She is drifting through life, stuck in limbo between the irresponsibility of youth and the permanence of full-fledged adulthood. Unlike her core group of friends, Emira hasn’t achieved the “typical” markers of success. She doesn’t have a stable, full-time job; she isn’t enrolled in graduate school; she’s about to be kicked off her parents’ health insurance. She tries to pretend that everything’s fine. She’s like the speaker in SZA’s “Wavy (Interlude).” When does drowning look like waving? Sometimes it’s hard to tell.

One night, Emira’s world is upended. While at a friend’s birthday party, she gets a call from her boss, Alix Chamberlain. Emira babysits Alix’s two-year-old daughter, Briar Chamberlain. Alix asks Emira if she can pick up Briar and take her out of the house for a few hours. There’s been a vandalism incident at the house and Alix doesn’t want Briar to see the police. Emira, who really needs the money, agrees. She takes Briar to the grocery store with her friend Zara. After Zara leaves, Emira is unjustly confronted by the store’s white rent-a-cop, who insinuates that Emira has kidnapped Briar. Turns out that a white woman shopping in the store thought that Emira looked “suspicious.” The security guard doesn’t believe Emira and uses her Blackness and her state of dress as proof of her guilt.

There are so many times throughout this book that I felt seen by the sharp observations etched in Reid’s prose:

With her phone pressed to her face and Briar’s hands in her hair, Emira screamed, “You’re not even a real cop, so you back up, son!” And then she watched his face shift. His eyes said, I see you now. I know exactly who you are.

It’s not until Mr. Chamberlain arrives to confirm Emira’s identity that the security guard lets her go. The whole time this was happening, a tall white guy in a Penn State sweatshirt is filming on his phone. Thirty-two-year-old Kelley Copeland lives in a building with a doorman, is employed at a well-paying job, and he’s interested in Emira. Emira and Kelley start dating. It all seems to be going fine until a terrible Thanksgiving at the Chamberlain house.

In a twist that I did NOT anticipate, Kelley [SPOILER ALERT] used to date Alix (real name: Alex) in high school, but they broke up after Alix called the cops on some of their classmates. This resulted in the arrest of the school’s star athlete, a Black teenager named Robbie. Robbie loses his college scholarship because of the arrest. The dinner is awkward, uncomfortable, and tense. It’s obvious that Kelley and Alix still harbor a grudge, and they both feel some kind of defensive ownership or “claim” over Emira. The meal fittingly ends with Briar throwing up at the table.

Now, of course, this whole thing comes back to bite everyone in the ass. Long story short, Alix violates Emira’s privacy, intercepts the video of Emira getting accosted at the grocery store, and releases it to the local news station. Emira mistakenly blames Kelley, since she doesn’t know that Alix stole the footage. They break up. Alix, fueled by equal parts guilt and a patronizing sense of responsibility, offers Emira a full-time nanny gig, with benefits. Emira accepts, then finds out IT WAS ALIX ALL ALONG, and burns that bridge in a way as delightful as Scarface (Guillermo Díaz) quitting the fast food joint in Half Baked. Her on-camera resignation induces a total meltdown from Alix.

Emira and Kelley don’t get back together, but Emira experiences a physical, mental, emotional, and financial glow-up that gives her a sense of direction and purpose. No longer drowning, she is finally an adult (whatever that means). The romantic in me wanted the couple to reconcile, but the overruling jaded skeptic in me was satisfied that they stayed apart.

At the end of the day, Kelley still has a lot to learn. He’s one of THOSE white guys: the kind who only dates light-skinned Black girls with natural hair. The kind who calls his girlfriend “Queen” and insists that he “doesn’t see color.” Someone once told him he sorta resembles Jon B. and he’s run with it ever since. The kind of guy the Lipstick Alley crowd would absolutely rip to shreds. He may not have released the video, but he will always hold the fact that he was “right” about Alix over Emira’s head. And his “preference” for Black women looks too much like a fetish.

However, Alix is by no means a perfect ally, or even a good ally, for that matter. She’s definitely one of those white people who thinks being called “racist” is a slur, posted a black square on Instagram and thought she was doing the most, would have “voted for Obama a third time” if she could, and is proud that her close friend group is “diverse.” In fact, I LOLed at this passage where Alix commends herself for being so “radical” and open-minded:

Alix fantasized about Emira discovering things about her that shaped what Alix saw as the truest version of herself. Like the fact that one of Alix’s closest friends was also black. That Alix’s new and favorite shoes were from Payless, and only cost eighteen dollars. That Alix had read everything that Toni Morrison had ever written.

Reid’s prose captures the nuances of racism, from the subtleness of microaggressions to the insincere, self-serving gestures of performative wokeness. And this line of thinking does exist IRL. They are out there, and they just discovered “Bye, Felicia!”

This type of white woman has touched my hair and asked if it’s real. She’s come back from vacation with a slight tan, put her arm up to mine, and exclaimed: “I’m almost as dark as you!” She’s offended that I won’t accept the role of Mammy to her Scarlett O’Hara, believing that my refusal to serve as her newest Black BFF means I’m standoffish, snotty, conceited, and rude. She thinks I’m a certified hip-hop expert because I once mentioned Kendrick Lamar. She is surprised that I’m not from the “inner city” and that I “can afford” to live in my “expensive” Brooklyn neighborhood. (Expensive meaning: I didn’t think Black people live there, could live there, or wanted to live there.) Her venom takes many forms, evolving with the cultural and political climate. She could be Amy Cooper or Becky with the Good Hair or a millennial in an overpriced “Daddy” hat or Karen with a distinct “Let-me-speak-to-a-manager” haircut.

This is the brilliance of Reid’s novel. Racism isn’t just about dropping the N-word. It’s smart. It knows how to go undercover, how to exercise enough restraint, and still maim.

All of this is to say: Read this book. Seriously.

Oh and here’s to more depictions of Twenty-Something Black Girls Just Figuring Shit Out. Because the concept of a Strong Black Woman is a racist trope and pop culture could benefit from more depictions of messy, confused, vulnerable, young Black women who are human and not mythical superheroes destined to save America from itself.