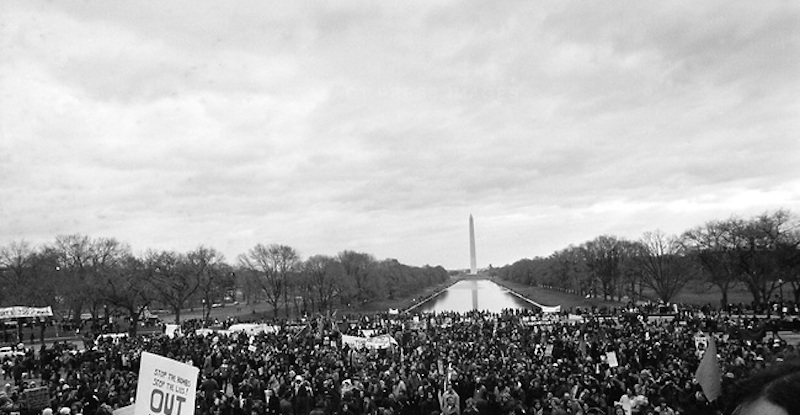 Why Three Generations of My Family Are Marching in Washington

“When you were twelve, you told me that you wanted to get arrested like the Berrigan brothers.” My mother tells me this while we are sitting in my kitchen in Brooklyn, talking about the upcoming Women’s March on Washington. My mother hasn’t been to a protest march in a long time. She is 83, my younger daughter is 19, and we are planning on going together, three generations strong. My daughter doesn’t know about the Berrigan brothers; Jesuit priests whose acts of civil disobedience during the Vietnam War transfixed me as a child. My mother is a poet, and I grew up surrounded by writers and artists in 1960s and 70s New York, and it was important in my intensely literary household that Daniel Berrigan was a poet as well as an activist and a priest. It seems to me now as if I was brought up inside a black-and-white film made by Robert Frank.

My mother took me to the anti-Nixon inauguration march in January of 1973. I wanted to get arrested like the Berrigan brothers, and I almost pulled it off.

On January 20th, 1973, the Senate Watergate Committee had not yet been formed, Nixon had just been re-elected by a landslide in which only 55 percent of the populace cast a vote, and he followed up his victory with the notorious “Christmas Bombings” of North Vietnam. B-52’s dropped 15,000 tons of bombs in 12 days, a force totaling more than each of the bombs dropped on Hiroshima and Nagasaki. We were going to Washington to show the rest of the world that he was not our president.

I have one vivid memory of that cold day in Washington, a moment of such unexpected violence that I will never be completely sure whether it really happened to me, or whether I was so close to it that I only think it did. I asked my mother what she remembered from the anti-Nixon inauguration march on Washington and she said, “I remember trying to keep you safe. There were snipers on the buildings. It was scary.” I don’t remember the snipers, I remember being cold all day long.

We had gone to the march with some of her writer friends. There was a woman I will call Eva, a dark haired beauty, intense and angry, like most of the adults we had ridden down with on a bus from Manhattan. She was younger than my mother, who was then in her late thirties, and I attached myself to Eva at the demonstration. At one point Eva decided to duck under the police barricades that separated the demonstrators from official guests for the inauguration, and I wanted to go with her. She took me by the hand, my dirty blond hair falling over my face and our scruffy looks marking us as intruders.

Once we were under the barricades, everything changed. The Nixon supporters looked rich to me. The men were wearing suits and overcoats, the women were bundled in fur coats wearing mascara, rouge and lipstick. They also wore heels and stockings. None of the women I knew wore stockings. I was probably wearing converse high tops covered with song lyrics I had scribbled in magic marker and a blue jean jacket. I wasn’t sure what we were going to do now that we had gotten in there, but Eva seemed determined to upset the equilibrium and I was down for that. A man who looked like security came barreling toward us, but just then one of the men in overcoats stood up and held out his hand to shake Eva’s, seeming to protect her from the security officer. She put her hand out, surprised by this show of solidarity, and the man slashed her palm open with a razor blade. I remember her gasp, and the quick line of blood as she pulled her hand back. The next thing I remember is running behind her, back under the police barricades where my mother and her friends were waiting. Had my mother even noticed that I had disappeared? It was chaotic and everything happened very quickly, she may not have known that I was gone. My mother exploded at Eva when she saw her hand, angry that she had taken me into danger. I yelled back at my mother, not understanding why she would blame Eva, who had just been attacked, and as far as I was concerned I was a full-fledged citizen of the revolution, making all my own decisions.

I asked my mother if she remembered any of this, and she wasn’t sure, at 83 her memory is not as reliable as it was. But she nodded when I told her about it and did not seem surprised. Was I actually on the other side of the barricades with Eva when it happened, or was I with the group when she came back? Is this why the first thing my mother said when I asked her about Nixon’s inauguration was that she was trying to keep me safe? Is it the shock and fear of what happened to Eva or the actual moment of slashing that I remember? There is no fact checking possible for this one event, cocooned inside that cascade of violent events which defined the political landscape of my childhood. I know that when I was growing up, I felt anything but safe.

My own daughters are acutely aware of the rising violence against our fellow citizens, the incarceration rates that bear out the concept of the “New Jim Crow,” and the worldwide xenophobia and acts of terrorism against ordinary people in the time leading up to Trump’s inauguration. When we went to a family movie at a suburban multiplex this past Thanksgiving weekend, there was an announcement at the end of the previews on how to respond to an event that required emergency exits, and it didn’t seem like they were talking about a fire. I had never heard anything like that before.

The Berrigan brothers have passed away, and Manhattan looks even more gold-plated since the election. In Washington tomorrow, I’m sure they won’t let us get anywhere near the invited guests. Like my mother, I am afraid for my daughters and the future of American democracy. But if I did not in fact reach out my hand across the barricades last time, I am ready to do it this time. I don’t feel safe in this country but I will not believe in the razor. I must believe in the clasp of hands.

Rebecca Chace is the author of the forthcoming middle-grade novel, June Sparrow and the Million Dollar Penny (Balzer + Bray, 2017), the adult novel Leaving Rock Harbor, (Scribner, 2010), and memoir Chautauqua Summer (Harcourt-Brace), which was selected as an “Editor's Choice” and one of the “Picks for Summer” by The New York Times Book Review. 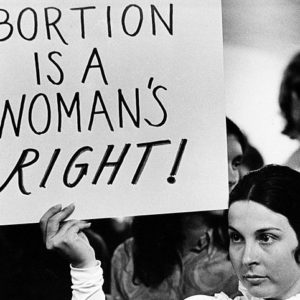 The sick knot in my gut has not relaxed at all since November 8th. It tightens. The sterilizing knots in my Fallopian tubes,...
© LitHub
Back to top