The Future of Reading Came and Went

It’s always an intellectual mistake to assume that the thing you love the most might be the exception. I remember listening to a public-radio conversation a few years ago in which two people debated the necessity and romance of record stores (a very large and storied one in NYC had just closed) and thinking, Well, of course record stores are going to close, it’s sad but it’s the way of the world, and feeling kind of smug about it because I don’t frequent record stores. And then realizing a moment later that in two, or five, or maybe ten years time—or maybe sooner—I could be listening to two people on the radio having this exact same wistful conversation about bookstores.

I didn’t feel so smug after that.

Bookstores are a sacred space for me and books are hallowed objects. I’ve worked in two of the former and owned and treasured an innumerable number of the latter. (I honestly don’t know the number of books I currently own; I do know that when my wife and I moved most recently, our moving company charged us extra afterward because we’d seriously underestimated the number of boxes of books.) My first and favorite activity in any new city is to locate and visit the best bookstore; I literally Google the city’s name and “best bookstore” and see what comes up. This almost never fails to lead me not only to a great bookstore but to the best, most interesting neighborhood in town.

I’m not alone in any of these romantic sentiments, of course. And not alone in the fear that, in my lifetime, it might all disappear. People once treasured vinyl albums and loitered for hours at record stores, too, arguing favorite classics and anticipating new releases, and then the music industry got shredded by the digital revolution. Vinyl record stores now function like antique shops; you can find them, sure, but what they offer is mostly nostalgia for a format that’s no longer relevant.

After all, e-books and e-readers seemed ridiculous until suddenly they weren’t. The Kindle was everywhere. Even people on the subway in self-consciously literary New York City were split roughly fifty-fifty between tablets and those prehistoric-looking physical books. (In hindsight, I’m sure this also had something to do with the popularity of Fifty Shades of Grey and the number of curious readers who didn’t want to out themselves.) Was it possible that books, that once revolutionary technology, would also become obsolete curios, confined to quaint and musty specialty shops? That my Google searches for “best bookstore” would be tragically shortened to simply “bookstore,” in hopes there would be a single one left?

So I am obviously greatly heartened by this report from the New York Times stating that e-book sales are waning and physical book stores are surviving, even thriving. I’m heartened in part because I’m convinced these are positive goods for the world. And I’m heartened because this reversal seems to confirm a theory I’ve long held but have been frankly too frightened to fully embrace.

The theory is this: Maybe books are different.

I mean, books are different. That’s obvious. People collected records and CDs, and they used to stash physical photos in albums as keepsakes, but among cultural artifacts, books are the one physical package that we proudly retain, archive and display. More than that, the experience of a book—of receiving what a book has to offer through the physical medium of the book itself—is much different than, say, the experience of receiving what a song has to offer through the physical medium of the vinyl 45, or the cassingle, or the shiny CD, or the MP3. Whatever medium the music is delivered in, the song remains the same—once it gets to your headphones, it doesn’t really matter what form it arrived in (esoteric preferences for the “warmth” of vinyl notwithstanding).

It’s different when you read a book. When you read a physical book, or you read an e-book, the physical experience of reading that book is different. It looks different. It feels different. It even smells different. Your memory of having read it will be different. Unlike music, food, or paintings, you can choose what head-hole to put a novel in: You can put it in your eyes (by reading it) or in your ears (by listening to the audiobook). You can read it on a screen, on which each “page” pops up in a kind of context-free procession toward infinity, with no physical referents as to how many pages have already passed and how many are yet to come. All books—all text—start to feel the same, as though dredged up from a vast grey ocean of pixels. Or you can read the exact same book—the same words, the same story, the same ideas, the same emotions—on paper, bound between covers, where you physically sense the heft of what you’ve read and of what you have yet to encounter. Where you can close the book with a satisfying thud when you are finished. Those are two very different experiences of the same book.

Many of my most treasured reading experiences are tied up with the physical books themselves: a used, crumbling Penguin Classics copy of A Farewell to Arms bought on the cheap and read in college. A particularly well-bound paperback copy of Emma by Jane Austen, with a pliant spine that let the pages fall open on the table just so. A copy of The Mezzanine by Nicholson Baker that I took out on a whim from the library, which had extra heavy laminated protective covers and was graffitied throughout with other people’s appreciative marginalia. These physical qualities are all as memorable to me, and as intrinsic to my experience of those stories, as the surrounding restaurant is to a memorable meal that you eat. Put another way: A physical book is like eating a great meal in a beautiful restaurant with a fantastic view; an e-book is like eating that same meal from a takeout box on your lap in a basement.

I’m so enamored of paperbacks, for example, in contrast to hardcovers—how they fit in your back pocket, how they get worn, get bent or torn, bear every mark of your love on them—that, when I wrote my first novel, it honestly didn’t feel entirely real to me until the first paperback arrived. The hardcover, which was beautiful and which I obviously treasured, and which had been out at that point for nearly a year, still felt slightly unreal, like a prank, or something you get at the county fair: A novelty book with YOUR name printed on the cover! The very flimsiness of a paperback, for me, enhances the experience of the story inside: That a cheap and disposable package could contain something that can transport you anywhere, hijack your brain, and maybe change your life.

Again, I know I’m an outlier on this; not alone, exactly, but a member of a weirdo tribe. I’ve seen other people interact with books—crack them open, read them, chuck them without a thought—often enough to know that the true book fetishist is in the minority. But this recent good news about print books at least suggests my own experiences with books—real books—aren’t simply delusions. That the appeal of the physical book itself—its heft, its scent, the tactile quality of its cover, the give of the binding, the paperstock—is not a mirage that no one else can perceive. That maybe books have survived for 500 years for a reason, and maybe they’ll survive 500 more. That maybe books are different.

Adam Sternbergh is a contributing editor for New York magazine and Vulture. Formerly culture editor of The New York Times Magazine, his writing has appeared in GQ and the Times of London and on This American Life. His book, Near Enemy, is on out this month in paperback. He currently lives in Brooklyn with his family. 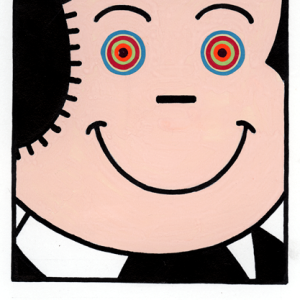 Like the bemusing queerness of Joe Brainard, Wayne Koestenbaum's aesthetic contains and redefines any medium he happens to chance...
© LitHub
Back to top