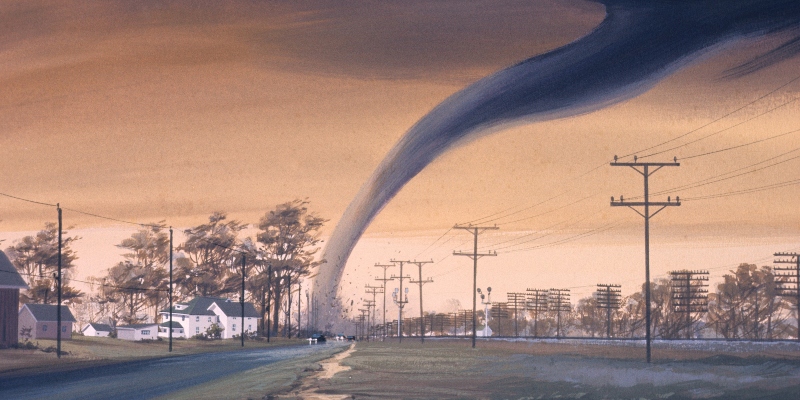 Why Nature Always Makes for the Best Antagonist

A reader once asked me, in a somewhat puzzled tone, why I liked writing novels with a natural disaster as the backdrop—she’d noticed I’ve utilized a fire, the 1918 flu pandemic, and now an epic earthquake for settings. I assured her that I’d written a number of books without utter chaos as the locale, but I’d found that books with calm settings are actually harder to write. With a calm setting, all of the opposition to the antagonist’s quest has to be created by me. A natural disaster, on the other hand, can provide a hefty share of it, which means I can shift all the remaining obstacle-creating upon any flesh-and-blood antagonist. I wouldn’t exactly say it’s the easy way out, but natural disasters are quite adept at thrusting ordinary people into extraordinary circumstances; sometimes they and they alone are the antagonist. So here are my top ten books, in no particular order, that utilize the oh-so-generous natural disaster as a framework for the story. 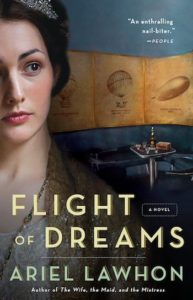 In May 1937, nearly 100 people stepped aboard the Hindenburg in Frankfurt, Germany, for what would prove to be a doomed flight. History tells us the airship, the largest ever built, exploded seconds before landing and that 36 people perished. What history can’t tell us is exactly why the dirigible burst into flames so close to completing its flight. Lawhon embraces the mystery of this disaster and crafts a compelling story from the point of view of five passengers—the Stewardess, the Navigator, the American, the Journalist, and the Cabin Boy. Unsolved mysteries of this magnitude beg to have a story supposed about them. I loved this one. 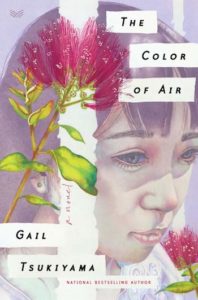 At more than 13,000 feet above sea level, Mauna Loa on the big island of Hawaii is the largest active volcano on the planet, and apparently among the most active, having erupted 33 times since its first recorded one in 1843. With an angry and active Mauna Loa as a fitting backdrop, as well as the infamous sugar plantations, the masterful Gail Tsukiyama—I will read anything she writes—spins a dual-timeline tale that interweaves the experiences—both good and bad—of a Japanese American family. As Mauna Loa rumbles and spews, long held secrets rise to the surface, too. Tsukiyama’s prose is beautiful and evocative. Her stories are always exquisitely character-driven, and this one is no exception. 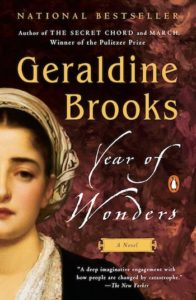 I don’t often read books more than once, because there are so many others still waiting to be read, but I have read Year of Wonders by Geraldine Brooks three times. I will probably read it again in my lifetime. The disaster in play is a medieval plague, and while that might seem a little too timely in these days of ours, the book shows us in haunting literary beauty what it is like to come up against a foe so tiny and so cruel. The novel is inspired by the true story of Eyam, a wee town in Derbyshire, known as the Plague Village in 1665-66. The villagers’ decision to quarantine themselves to stop the spread of the deadly scourge has made them legendary. The story is told through the character Anna’s eyes, as she experiences the spread of both disease and superstition. With death as an ever-present companion, the young woman bravely sets out to survive not just the plague but her losses. Expertly written. 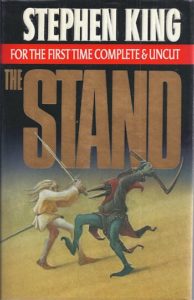 This is the first of recommended books on this list that imagines a disaster that hasn’t happened, and, cross-our-collective fingers, hopefully never will. The Stand is often listed among the best of the best of Stephen King because so many of us who don’t read the horror genre, of which King is king, read and loved this one. In its 1,000 pages (yes, that many) is the timeless battle between heaven and hell. Picture a post-apocalyptic Earth after a weaponized strain of influenza is accidentally unleashed and 90 percent of the world’s population is killed. Imagine that the few survivors rally together in groups to establish a fledgling social system, all while the contest of the ages—the fight between good and evil—rages all around them. Imagine multilayered characters and page-turning action. If you’re not in the mood for a pandemic book at the moment, put it on the back burner for after we’ve turned the corner on COVID-19. Because surely we will. 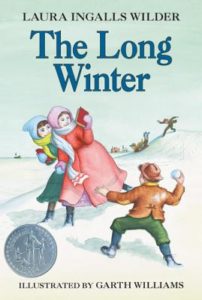 I read this when I was in fifth grade and just the mention of it makes my fingers and toes feel the chill of getting lost in the pages. The Long Winter is the sixth of nine books in Laura Ingalls Wilder’s autobiographical Little House series. The backdrop of this one is southeastern Dakota Territory during the winter of 1880–1881, when Laura was fourteen years old. Starting in mid-October, blizzard after blizzard stormed across the Plains, and by December, drifts completely buried single-story buildings. Trains stopped running, supplies dwindled, livestock was lost—and if that wasn’t bad enough, spring came late. The novel is written with the middle grade reader in mind, but it’s still an unforgettable favorite five decades after I read it. 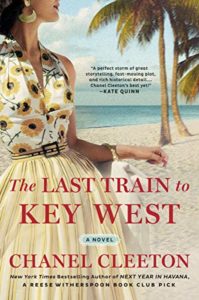 The Last Train to Key West is the story of three women who find themselves on the Florida Keys when the Great Labor Day hurricane of 1935 makes its devastating landfall. Helen is pregnant and trapped in an abusive marriage, newlywed Mirta (a relation of the Perez family which you might recognize from two of Cleeton’s earlier novels) has just arrived from Cuba with her husband from an arranged marriage, and Elizabeth has come to the Keys to look for her missing half-brother. They don’t know a Category 5 hurricane that will claim its place in history as the third most intense Atlantic hurricane is headed their way and is about to reshape their lives. Cleeton is a gifted storyteller and her books are always memorable and transportive. I’ve loved all of her historical fiction titles, but especially this one. The way she wraps up the story in the end is stellar. 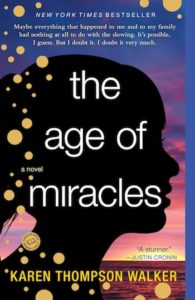 Here is the second book on this list that features a natural disaster that we should all be eternally grateful hasn’t happened. Imagine that this spinning planet we call home, always so reliable in its orbit around the sun, suddenly began to slow its speed of rotation. What we know as day and night begin to change drastically. Gravity is not the same. The weather is different. Growing seasons are different. The tides are different. Imagine there is no longer such a thing as a pineapple; it is a fruit that only exists in memory. The protagonist in this fantastical setting is eleven-year-old Julia, who approaches the effects of this highly impactful little change in the earth with both naïveté and pluck. I was spellbound by the storytelling and in awe of the author’s ability to pull off the premise in such a believable way. 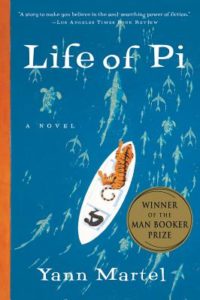 This longtime favorite book features a shipwreck caused by a storm at sea—the natural disaster that only matters if you’re on a boat in the middle of one. It’s a story about a boy from Pondicherry named Pi Patel, whose parents own a zoo. During an ocean-going transport of the family and the animals, a violent storm changes everything for young Pi, who survives the sinking of the ship and then spends more than 200 days adrift in a lifeboat with only a Bengal tiger for company. It’s no friendly Calvin and Hobbes relationship here, either. Life of Pi is an imaginative tale and yet very real, too. I would read it again in a heartbeat. 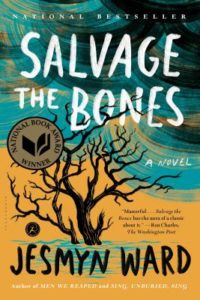 This title is the most recent one I’ve read, and I picked it up because I absolutely loved Ward’s Sing, Unburied, Sing, which is actually the third in a loose trilogy of books by Ward set in the same fictional Mississippi coastal town. Salvage the Bones is the second in the series (yes, I’m reading the Bois Sauvage books in reverse order and I’m here to tell you it’s perfectly all right) and a 2011 National Book Award winner. The construct of the novel is the stretch of 12 days leading up to Hurricane Katrina, and its beautifully drawn characters are children without a mother, doing what they can, as best they can, within the heartless confines of poverty. Ward’s prose is ethereal and hauntingly beautiful. The first in her Bois Sauvage series, if you wish to begin at the beginning, is Where the Line Bleeds. 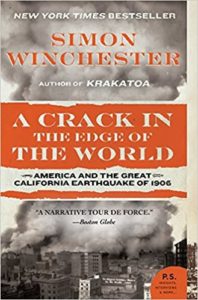 Simon Winchester, A Crack in the Edge of the World
(HarperPerennial)

International bestselling author Simon Winchester vividly brings to life the 1906 San Francisco earthquake that flattened the Paris of the West, and as the publisher describes it, a city “symbolic of America’s relentless western expansion.” Winchester’s was the first book I read for my research dive into this natural disaster so that I could write The Nature of Fragile Things, and the only work of nonfiction I included on this list. I was so pleasantly surprised by the narrative in the pages of A Crack in the Edge of the World. It reads like a story—which is, of course, what history is. It’s our story. Highly recommend. 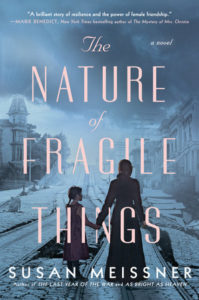 Susan Meissner’s The Nature of Fragile Things is out now from Berkley, an imprint of Penguin Random House.

Susan Meissner is a USA Today bestselling novelist with more than half a million books in print in fifteen languages. Her novels include The Nature of Fragile Things (starred review, Publishers Weekly), The Last Year of the War (a Library Reads and Real Simple top pick), and As Bright as Heaven (starred review, Library Journal.) She attended Point Loma Nazarene University and when she’s not working on a book, she volunteers as a writing workshop facilitator for Words Alive, a San Diego non-profit dedicated to helping at-risk youth foster a love for reading and writing. 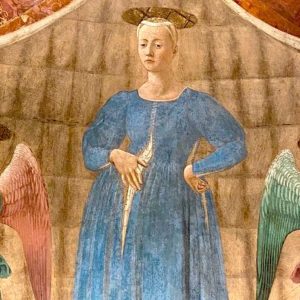 Piero de la Francesco’s Pregnant Madonna hangs in a small museum dedicated solely to the fresco. The museum is in Monterchi,...
© LitHub
Back to top
Loading Comments...