Randa Jarrar on Mothers and Sons

Piero de la Francesco’s Pregnant Madonna hangs in a small museum dedicated solely to the fresco. The museum is in Monterchi, Tuscany, a one and a half hour drive from Florence. The structure that holds the fresco is very much like any other Italian building in the area—large, sand brown blocks, small arches above a doorway. The sign outside tells visitors that entry to the building is 6.5 Euros… and free of charge for pregnant women.

When visitors enter the hall where the fresco hangs—inside what resembles an aquarium—they can finally see the pregnant Madonna. She wears a blue dress, lapis lazuli, with a white lace slit opening in the front, which she softly undoes with one hand so that she could fill out the dress with her pregnant body; get into the practice of suckling her baby from her breast. She rests the other hand at her side, over her sciatic nerve, which is represented as a smaller, narrower white slit under more lace.

Her halo is no longer golden, and her eyes are asymmetrical, downcast, and mournful. A visitor may bring her face as close to the Madonna’s face as she can without angering the guard. The Madonna’s lips droop. She doesn’t look like a teenager. The two angels flanking her feel unnecessary. They have nothing to do with this.

At least that’s what I thought when I saw her. I thought, she should be alone, the way I was.

The hand resting on her belly reminds me of a faceless baby. The Madonna stares down at it, sad—about her son’s death, which would one day come; about the fact that she’d had no choice but to carry him. Her left ear peaks out from under her white, pure headdress, a small un-vagina for God to pass his spirit through, cleanly.

That wasn’t my story, I thought.

No one memorializes women who are raped, coerced into carrying babies full term, forced to raise children alone. There are no frescos of their pained, pregnant bodies. They are nobody’s vision, travel without angels, are bereft of haloes, or blue, easily expanding maternity dresses. I felt no sense of recognition. The only thing I could think of, staring at the dress, was the Madonna taking it to a laundromat in Yonkers, and how many quarters it would take for her to wash it.

When I see images of the Virgin Mary weeping for her son, the pain she feels is one I cannot fathom.

I once discussed this mother-son bond and fear of losing one’s child with my poet friends H and C in Minneapolis. We had all—a group of Arab American writers—shuttled over to The Electric Fetus, the late Prince’s favorite record store. Now we were walking around a park, H and C and I, as C told us that he was afraid of dying at any moment. He said his mother as afraid of it, too—that she was in a constant state of mourning even though she had never lost any of her children, and neither of her parents. C said this was Palestinian loss—that to be from an erased place is to constantly fear erasure of those you love the most.

Is it the fault of the mother that her child will suffer? Or is it empire, white supremacy, the denial of ongoing genocide, and the prison industrial system to blame?

Years earlier, in London, a reporter had asked me, in a room where the two of us were alone, why Palestinian mothers don’t care about their children’s deaths; why they push them out of the womb, the house, the protection of family, and send them to fight, to annihilate Israel. I was shocked, mostly because I wanted to talk about fiction and literature, but also because I hadn’t expected such unvarnished racism. When I told him it was actually Palestine that had been annihilated, that Palestinians women were human, and tried to get back to the subject of my own writing, he stopped me, and exclaimed, “Oh, you’re talking about literature?” What else would I talk about?

The Mothers of the Movement; Black mothers in America have long experienced and endured these racist representations of their suffering. Should raising Black children automatically spell grief? Is it the fault of the mother that her child will suffer? Or is it empire, white supremacy, the denial of ongoing genocide, and the prison industrial system to blame? Emmet Till’s mother gazing upon her son’s erased face. Palestinian mother staring at her son’s erased face. Women whose land was taken from them and women who were stolen from their land. And Maryam, her own womb and body taken from her so that later, she can gaze upon her son’s crucified figure. Who wrote this story? Are we talking about literature?

Are there therapists who specialize in Palestinian mothers’ grief?

H lost his mother in his early twenties and now writes perfect poems about her; so perfect that I have dreamed of her. A white critic once wrote that he needed to stop writing about her and “move on.” How do we move on from being orphaned?

I no longer want to be a vessel for others—reclaiming my body to mother myself has brought me the most challenging and unexpected grief and joy, braided together.

Children lose their mothers; this is the more natural loss. I was born just a couple of months after my own mother lost her mother. My second husband lost his mother as a child. Many of my lovers have been orphaned of their mothers. My high school best friend lost her mother as a child. So many of my close friends are unmothered. My mother once told me that she thought I was the reincarnation of her mother. My acts of mothering preceded the birth of my own child. That is something I have resented in the past; caring for others, collecting orphans, my body a kind of time machine, a healer. I no longer want to be a vessel for others—reclaiming my body to mother myself has brought me the most challenging and unexpected grief and joy, braided together.

The Virgin Mary. Miriam, Maryam, a Palestinian teenager who experienced reproductive coercion—because what was the annunciation but a bro telling a woman that the bigger, more important bro, the first bro of us all, had chosen her to carry his child, his self, his holiness embodied.

One could ask, but why didn’t Bro-God, God-Bro, whomever, just manifest himself on earth? The response (from Christians and even Muslims) is usually, He did! Through Jesus. If you press the question, and ask, why wasn’t Mary herself then the representative? Why have her carry a baby when she could have been Jesus? The answer is, but then the bro would have told her mom she would have to carry God, and her mom’s mom, and her mom’s mom’s mom. Plus a woman can’t be god. Don’t be silly.

In the south of Lebanon, two hours from Beirut by bus, is the cave where Mary supposedly waited for Jesus while he was attending a nearby wedding, turning water into wine. Tourists visit this cave regularly, with preference and deference given to pregnant and infertile women. The cave itself is like a conch shell, a giant, earthy ear, willing to hear mothers and yearning women’s sobs. To reach it, visitors hike a circular path. Once inside it, the cave boasts no water.

I visited this cave in 2017. The guard told visitors that it had been a dry Winter, but that nonetheless, the cave was open for prayers and miracles.

The cave was dark but glimmered with a few objects: crosses, rosaries and a painting someone left behind. When I visited, there was also a metal plate sticking out of the earth; I dug it out easily and found that it was the metal plate over the digits of an old rotary phone. I imagined Maryam calling Jesus. Texting him the way I text my son:

Did you turn the water emoji into wine emoji yet?

Not yet. After this set.

Ok. It’s getting kinda chilly. I’m still in the cave.

Nvm, I got a ride sooner

Ok. There’s water here, so I’m set for a while.

I recently made a pilgrimage to a facility that rented sensory deprivation tanks, on the outskirts of the redwoods in Northern California. Were a person to walk into the room where I was floating, they wouldn’t have seen me. I was invisible, floating inside a sensory deprivation tank which resembled an alien pod. I willingly put myself there, and shut the door behind me.

The pod was white and filled with salt water. The attendant said she could regulate the music or I could. I prefer to regulate it myself, I said. It’s a rare opportunity for me to control the soundtrack to my own erasure.

The temperature was the same as my own body’s. I was floating in darkness. As I bob, I imagined my mother walking down the street in Chicago, carrying me inside her, not knowing what I looked like, or that her own mother has recently died.

I didn’t feel the pain in my feet, my back, my heartache. I barely even felt the water. I floated in the darkness and emptied my mind of everything. My body was no longer a vessel at all, but one with all things. 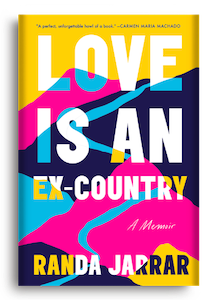 Love Is an Ex-Country by Randa Jarrar is available via Catapult.

Randa Jarrar is the author of the novel A Map of Home, the collection of stories Him, Me, Muhammad Ali, and the memoir Love Is an Ex-Country. Her work has appeared in The New York Times Magazine, Salon, Bitch, BuzzFeed, and elsewhere. She is a recipient of a Creative Capital Award and an American Book Award, as well as awards and fellowships from the Civitella Ranieri Foundation, the Lannan Foundation, Hedgebrook, PEN, and others. A professor of creative writing and a performer, Jarrar lives in Los Angeles.

Why Nature Always Makes for the Best Antagonist 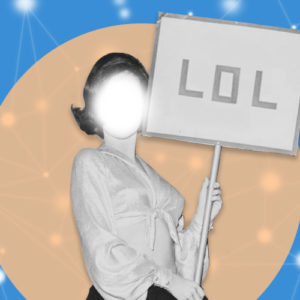 By some odd coincidence, or other decree of the marketing gods, this month, two wildly anticipated first novels About the Internet...
© LitHub
Back to top
Loading Comments...