Why Is It So Hard For a Woman to Read Alone in America?

On the Pleasures of Paris, City of Solitude and Poetry

For those of us who work on an academic calendar, the beginning of the summer is filled with promise. This promise is never completely realized, and there is something a bit scary about it, but it’s still there. Summer is a time to sit and read.

I have been thinking about Paris.

People walk in Paris. Walking is part of the city’s identity. The aimless stroll, the walk with no goal apart from walking. And I love to walk the city’s streets, mapping them out, but this is not what comes to mind now. Now, I think of a café table and a chair.

It was in Paris that I learned how to sit. In 1997. Junior year abroad.

It can be hard to find places to sit. When I lived in New York, I would go out by myself and read. It was one of my favorite things to do, to camp out in a café or a bar for hours. Now I live in a small city in the South, where I moved for a job at a university seven years ago, and if I go out by myself to read, people talk to me. They won’t leave me alone. This is true when I travel, too—when I drive around North Carolina and Tennessee and Georgia and Virginia. What are you doing here all alone? they say. Shame that you’re all by yourself, they say, insisting that you talk to them, join them, come sit with them.

But it’s not a shame. They don’t understand.

I have a collection of paintings of Paris that hang in my stairway at home, and sometimes on my way up to bed, I wonder if I could jump into one of the paintings, like in An American in Paris, and sit down in a chair in a café and read. There are cafés in a number of the paintings, so I would have to choose which one. Do I want to look at the Sacré-Coeur or the Arc de Triomphe? The café by the Arc de Triomphe has a red and white striped awning; the one by the Sacré-Coeur is packed with people. Maybe I could spend some time in one painting and then switch to another one: start in a world of watercolor washed thin on the paper and then move into the brushstrokes of oil paint.

I think that some of these scenes are invented, or possibly amalgams. The streets and cafés may not actually be there.

I liked sitting in the afternoons and waiting for them to give way to evening. I smoked my Chesterfields, a white and blue pack with black faux-medieval script, there on the table, the hours measured in cigarettes. As the light faded and the day moved forward, I felt that I had gotten free of time. The wine helped, too. It was odd, the sense of freedom at such a little table in a crowded place, as if the confines allowed for the freedom, like a poem.

I read all sorts of things and bought books in the stalls along the river. I read Hemingway: a predictable choice. Sometimes I read him translated into French. I was trying to be good, to read in French and not in English. I did this with Beckett, too. And I read Apollinaire, Colette, Rimbaud. Baudelaire. Sometimes I wanted the city to be Baudelaire’s city, a haunted place.

But mostly I remember a poem that I read again and again because of two lines. Verlaine. These are the lines:

I had never read anything like this before. He wrote it in 1874. And I have never read a translation—not then, and not in the years since then. But a literal translation, just to get at the sense, would be something like:

It cries in my heart
Like it rains on the city

Or a slightly more elegant approach:

Tears fall in my heart
Like the rain on the city

But in the second translation, “fall” replaces both of the verbs, and they are not the same. I was transfixed by these verbs: pleure and pleut, crying and raining, and the resonances that they don’t have in English. What is happening in the heart and what is happening in the city are doubled, layered. The heart means what the city means; the city means what the heart means. Almost. They are similar. The heart and the city are connected by the word comme: like. The comparison wants to hold.

I also think of the prepositions: dans (in) and sur (on). In my heart, on the city. Dans makes the heart a space, a thing with an inside. Sur emphasizes the idea that the rain falls on the city. It’s the same preposition you would use to say that something is on a table—sur la table. But the sense is different with rain as rain can be on things in a way that other things can’t be on things.

The poem was thrilling because I got to know it, and feel it, because I could read it. In French. This made me feel French—almost. Comme. It communicated something I felt was true about the way a person can be in a city, that you can take a place inside you, or already have it there from the beginning.

I read this poem so many times, until I knew it by heart, and then if I didn’t have the book with me, I could read it in my head, and this was the best kind of sitting and being alone. I sat and read it in cafés in the rain, in the plastic bubble enclosures out in front that everyone smoked in, a hazy world of heaters and talk and wine and fog. Sometimes when it rains in Paris, it smells like gasoline, a very particular kind of gasoline that I have only ever smelled once elsewhere, and when I did, that one time, it was strange and sad and the city felt gone.

I still have the white Gallimard edition of Verlaine’s Romances sans paroles. The book belonged to a Parisian friend of mine, and her name is written in the upper right-hand corner of the inside cover, her first name in blue ballpoint pen and then her last name in black (maybe the blue pen ran out) and in all caps the way the French do that with their last names. She must have given it to me, but I don’t remember, and we lost touch years ago, something I have always regretted. She marked certain poems by folding round purple stickers over the bottom of the pages, and yellow ones over the top of some pages, like little half moons. She folded two purple stickers over the page with this poem: page 127. It is marked up with pencil, as other poems are.

If you sit for many hours and look down at a book and then up at a city and then down at the book again, eventually the two blend into one, and there is no longer any difference between them. This is how the collapse between literature and life happens. Lots of people distinguish between books and life. The page and beyond the page. But in those cafés, when I was younger, I mixed them up in my mind, so I didn’t carry that line between the written and the real with me into adulthood, if I ever had it.

I knew that Verlaine’s ville was this ville, here, the rain and the smell of gasoline. 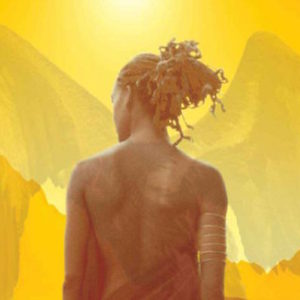 This week in literary film and television news, there was a lot going on. The Emmy nominations were announced on Thursday...
© LitHub
Back to top