Why Is It I Keep Seeing the Same Painting Everywhere I Look?

A Tale of Baader-Meinhof Phenomenon (in English and Italian)

via The Florence Review
By Gianluca Didino

In 1994, a man named Terry Mullen wrote to his local paper in Saint Paul, Minnesota, describing a strange experience: ever since he’d heard it mentioned for the first time, the name of a German terrorist organization, the Baader-Meinhof Group, seemed to be turning up everywhere in his life. After this story was published, a surprising number of Pioneer Press readers reported similar experiences.

It was not some episode of mass psychosis: Mullen had stumbled across the cognitive bias known as “frequency illusion,” or, appropriately, the “Baader-Meinhof phenomenon.” Once we start to notice a detail, we will notice it more and more often, extracting it with exponential frequency from the jumble of information around us.

I must have fallen victim to the Baader-Meinhof phenomenon a few years back, when I began to see a famous German Romantic painting everywhere I looked: Caspar David Friedrich’s Wanderer Above the Sea of Fog.

It started one day and went on for months. The Wanderer primarily showed up as a meme: the man standing with his back turned, gazing out over the clouded peaks of the Bohemian mountains, was now taking a selfie, or watching unperturbed as a city went up in flames, or was replaced by Pepe the Frog, or was getting ticketed by a policeman, or was dodging laser beams in an intergalactic war.

The Baader-Meinhof phenomenon wasn’t a cognitive distortion in my brain, it was a message in code.

Then I spotted him in Instagram posts from museums and cultural institutions, on the bags of young women coming out of MoMA, in car ads. Finally, a high school friend I hadn’t heard from in twenty years sent me a postcard from the Hamburger Kunsthalle. It was of the Wanderer.

On the back, he wrote that he remembered me having a photocopy of that painting glued in my planner. The fact that he’d mailed a postcard in the twenty-first century was odd enough, but this memory struck me even more.

He was right: the Baader-Meinhof phenomenon wasn’t a cognitive distortion in my brain, it was a message in code. My mind was trying to tell me something through the oblique language of repetition.

At sixteen, the town where I was born felt like hell on earth. I had a gnostic impulse to flee the clutches of matter, which in that rich provincial area seemed to be crushing everything. It felt like a moral rot eating away at it all from within. In winter I would walk through cornfields, the cut stalks looked like black, decaying teeth. Sushi restaurants sprang up in the furniture factories that had gone bankrupt when Ikea arrived, like hermit crabs stealing the homes of sea snails.

The high school, with its drab green walls, left no hope about what our future held in store: cookie-cutter housing, five-a-side on Thursdays, flings on business trips. Before falling asleep I would ponder flight or suicide, unsure which option was better.

Friedrich’s painting had been used to illustrate the section on Romanticism in my Philosophy textbook. Something about that picture struck me: the wanderer had his back turned, leading us to identify with his point of view. His dark figure stood out against the vague, endless blue horizon.

It was a soft morning in early fall, I remember the light slanting through the dust. My classmates were drowsing, lulled by the teacher’s drone. Looking at them, I got the sense they were only partially alive, half-formed beings that were part human, part mannequin.

I found my writing sloppy and naïve, so I started writing better, published more novels. I won awards. I was on television.

That’s when it happened: the realization came as an utter jolt, as if I’d just remembered some fundamental piece of information that had lain buried inside me up to then.

It was like waking out of a dream, everything looked sharper, the outlines crisper. I was floored by that preternatural clarity. I finally grasped what I had always known: I was the wanderer.

From then on my life was aimed at just one goal: to move towards that unreachable horizon. To pursue desire without ever fulfilling it, so it would be endlessly fueled. To travel without ever stopping. On my arm, I wrote in marker: Sehnsucht.

I printed out a copy of Friedrich’s painting and glued it in my planner. I hung another one over my bed, so I’d always remember a more authentic life was out there somewhere. I started studying with more zeal, my grades picked up. I made my parents happy, although they couldn’t know the truth.

That same year, I discovered sex. In the second just before orgasm, that door of absolute possibility opened for a moment, closing again as the semen left my body. Then, in the dim light of some adolescent bedroom, I would sink back into matter. I soon became a passionate, insatiable lover.

I graduated with honors and left my town to study in a big city. By then I knew I wanted to become a writer. For the same reasons that I threw myself into love: writing was a way to fuel that unquenchable desire. I published short stories, then a successful novel. People began to recognize my name.

In moments of solitude, in the apartment I’d bought on the sixth floor so there would be nothing to block the view, I often found myself fantasizing about suicide. There seemed to be no difference between the horizon stretching endlessly before me and the sheer vertical drop to the pavement. It wasn’t desperation, it was the apex of lucidity: what better way to make sure the journey never ended than to interrupt it through an act of will?

It was then that the Wanderer started to turn up everywhere, first as a meme and later, when I began to go out again, on the streets of New York.

I didn’t kill myself, but the dissatisfaction crept back. The city, which seemed inexhaustibly big when I arrived, now felt like an overgrown town, the same drowsiness plaguing its inhabitants. Italy itself seemed provincial and hopeless, so I sold my apartment and went to London, then left Europe and settled in New York.

I found my writing sloppy and naïve, so I started writing better, published more novels. I won awards. I was on television.

I had other women, trying to go further, get to a place where only someone else’s body can take you, never your own. At the end of every relationship I fell back into the ash heap of existence. Every time I vowed to kill myself, but never did.

One day I caught my reflection in the mirror of my Bensonhurst loft, where I was paying the rent with a generous advance from my American publisher for the book I was preparing to write. Everything changed again when I saw the reflection of a middle-aged man.

I never wrote the book. The American publisher took back the advance. I broke up with the woman I was seeing. For weeks I stayed shut up in that apartment I could no longer afford, sleeping till noon and wasting time online. The weeks turned into months.

It was then that the Wanderer started to turn up everywhere, first as a meme and later, when I began to go out again, on the streets of New York.

In those twenty years I’d forgotten him. New images had piled up over that of the man gazing at the Bohemian peaks. The horizon had ceased to be the one depicted in a nineteenth-century painting and had become a private world within, indistinguishable from my being. The Kunsthalle postcard brought everything back, all at once.

I realized what my previous epiphany had concealed for so long: that I should have killed myself while I was in time. Now it was too late. I hadn’t noticed, but the horizon had crept closer, the silhouetted mountains were no longer vague and blue but dark and heavy. The grip of matter I’d tried to escape had caught up with me, or rather, I had caught up with it.

I was living in a trendy neighborhood, I was a famous author, I’d traveled all over, yet it was as if I’d never moved an inch. I was still sitting in a drab green room at that provincial school, sixteen years old. Although I’d recently turned forty, I could already see death taking shape. I’d devoted my life to a single mission, and failed.

Above all, I was still alive. Now I had no other options: since I hadn’t killed myself as a young man, I would have to learn how to die.

The day that I got the postcard and realized all this—today—the news is full of the fires ravaging California. A few weeks ago, this neighborhood of music producers and organic vegetables hit the highest temperatures ever recorded. The Maldives, as I was told with a smile by a girl with purple hair at a literary cocktail party the other day, are sinking, like Venice.

I’m reminded of the meme where Friedrich’s wanderer is watching unperturbed as the world goes up in flames below. The horizon no longer vague and endless, but reined in by a thousand fires.

I think about Terry Mullen, who thought he’d gone crazy but had instead discovered a cognitive bias that psychologists didn’t know of till then. I think about how every individual life, and the life of humankind, unfolds within a cognitive bias of which we’re unaware, that silently guides our existence, so that we think we’re going one way when instead we’re going another. We realize our mistake when it’s already too late.

In the end, the Wanderer was wrong: there is no horizon, no place to reach. It’s always too late, from the start. 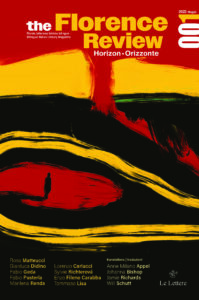 The Florence Review is the first bilingual literary magazine in Italian and English, published in Italy by the publisher Le Lettere. Founded by author and editor Alessandro Raveggi as the editorial project The FLR in 2016, it publishes and translates in its six-monthly issues a selection of the most important contemporary authors of the Italian literary scene, hosting new voices selected through periodic calls for submission, relevant illustrators and top English translators. Edited for this new series by Martino Baldi and Alessandro Raveggi, it narrates the country and the culture through keywords, source of inspiration for stories and poems.

Born in Piedmont in 1985, in 2013 he moved to London, where he currently lives and works. He is the author of Essere senza casa. Sulla condizione di vivere in tempi strani (Minimum Fax 2020) and Brucia, memoria (Quanti Einaudi 2021). He has been a contributing writer for several magazines, including Il Mucchio Selvaggio, Internazionale, IL, magazine of Il Sole 24 Ore, and currently collaborates with L'Indiscreto. In 2017 he was part of the organization of the first edition of FILL – Festival of Italian Literature in London.

Translator Johanna Bishop grew up in Pennsylvania, was pigeonholed as a future translator by a standardized test in middle school, and has embraced that fate full-time since 2014. She has a particular interest in the overlap between literature and the visual arts. Her work has appeared in many journals and anthologies (most recently, Bennington Review, AGNI, and Tempo: Excursions in 21st Century Italian Poetry). Recent books include Tamam Shud by Alex Cecchetti, Oh mio cagnetto by Diego Marcon, and Fossils by Maria Grazia Calandrone. She lives in Tuscany. Since 2016, she is a resident translator of The FLR - The Florentine Literary Review project, now The Florence Review.

Finding the One Book My Young Son Would Sit Still To 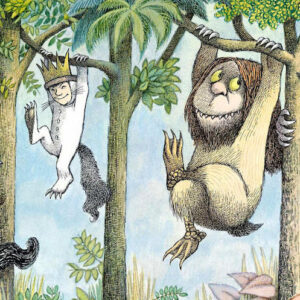 Finding the One Book My Young Son Would Sit Still To My daughter would sit on my lap while I read to her. We rocked in the gliding chair my grandmother gifted us when she was born....
© LitHub
Back to top
Loading Comments...