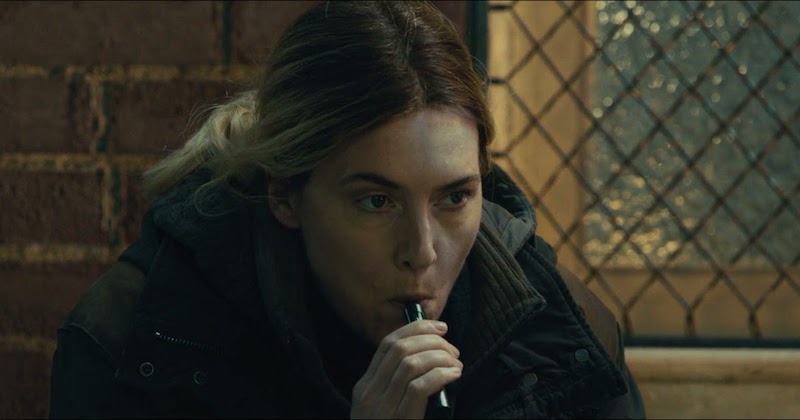 Why is every on-screen antiheroine suddenly vaping?

Much has been made of Kate Winslet’s buzzy transformation into hard-boiled Philadelphia detective Mare for HBO Max’s Mare of Easttown, one of my favorite shows of the year. In The New York Times, Maureen Dowd catalogued every tool used to turn the glamorous Winslet into what Winslet herself described as a “wildly flawed, messy, broken, difficult woman”: thick eyebrows, a thick accent, flannel, cheesesteaks, bad posture, Peloton to make her legs thicker, and—most eye-catchingly—an ever-present vape pen, which she puffs on in moments of murder-solving difficulty, family stress, or loneliness.

Interestingly, Mare’s not the only “difficult woman” to be sporting a vape on television these days. From Rosamund Pike’s unrepentant con woman in Netflix’s I Care A Lot to Hannah Einbinder’s faildaughter comedy writer in HBO Max’s Hacks, vapes are rapidly becoming visual shorthand for a type of dirtbag antiheroine, an acerbic woman with some unlikeable qualities trying to succeed in a hostile world.

One could read this trend as simply an update to the iconography of women smoking onscreen, and the slight hardening it suggests: this lady’s a little bad . . . and she has appetites. Post-Juul, vaping has reached a tipping point where it’s no longer solely associated with frat boys or tech bros; it’s simply current. For men, who have vaped onscreen for years, vaping can locate a character within a series of types—nerds, buffoons, jerks—but for female characters, it’s still a tad transgressive, placing the vaping woman on the fringes of appropriateness. In this case, vaping woman might be akin to this century’s femme fatale.

But vaping as a character signifier is not quite the same as smoking. There’s no encoded glamour to a vape; it’s not a social activity, and it doesn’t guarantee you a moment of rest as you walk outside to smoke. Instead, it’s blocky, functional, designed to get the nicotine to your lungs as quickly as possible. It’s less about pleasure than it is about alleviating need—perfect for representing a woman governed by her own demands. A vaping woman needs something she doesn’t have, and intends to get it; she’s in it, at least partially, for herself. The repeated nature of vaping indicates perennial dissatisfaction, another feature of a “difficult woman.” It also indicates treating your body badly, impulsivity, another crucial feature.

Vaping, blessedly portable, keeps the vaping woman in the middle of the action. Sanford Meisner said “the foundation of acting is the reality of doing”; to really complete a task introduces embodied reality into a scene. Vaping is about ridding oneself of discomfort, so we can understand a vaping woman’s subtextual frustration, want, unhappiness via the timing of a pull on the vape. Vaping is also a particularly useful action because it results in a personal physical sensation only legible to the vaping woman (rather than, say, moving a stapler around or writing in a notebook). Vaping gives the vaping woman a private moment within a public interaction, a moment with her body—vaping gestures at internal complexity.

It’s 2021. We’ve shifted from being obsessed with “strong female characters” to being obsessed with “real female characters,” which can mean flawed, tragic, obnoxious, or simply introduced to us in the bathroom with pants down. Vape pens provide an easy visual language for viewers to understand that a woman is real, in need, body-oriented, flawed, complex, addicted to something—even if she’s successful, loving, excellent at her job. Why wouldn’t TV lean on it at every opportunity?

I like all the characters I’ve named, and regardless of how calculated they are, they do feel real. Some women vape; putting it onscreen is a welcome acknowledgement of the world as it is. Or, maybe there’s a simpler answer. Here’s Rosamund Pike on her character in I Care A Lot: “The backstory of Marla is that she had a vape business, until she was Wal-Marted out of business by a great big discount vape store across the street, which she was furious about. And I think that was her shot at the American dream played fair . . . every time she inhales, it’s bringing that attitude to it. It’s the attitude of having been screwed and now you’re out to screw everybody.” Maybe there’s just an extended vape cinematic universe we don’t know about.