Jane Mendelsohn on the Power of Fiction to Bear Witness

The role of the artist is to not look away.

We live in dark times, but there is always hope. This is the perspective that has shaped my writing since my first book was published 20 years ago. These days, the times feel darker. Whether that is because they really are, or because I’m older and have seen more, or my brain chemistry has changed, I don’t know. But I know that I’m not alone in feeling that the challenges facing us today seem daunting, and the question of how to navigate the world while maintaining some piece of one’s soul or integrity or whatever you want to call it, can be overwhelming. Over the last several years, as thoughts of a new novel emerged in my mind, it became clear that this book would be about how to survive in the chaos of today. The story that unfolded in my head was extreme, outrageous, like a Greek tragedy with epic-sized problems besieging flawed human beings, set in the beautiful and also bruising contemporary mess that is our globalized, technologized, monetized planet. I say all this to give some context for the question I’ve been asked to address in this piece: what got me interested in including the very social issue of sex-trafficking in a literary novel?

A few years ago a friend invited me to become involved with an organization called Sanctuary for Families. I understood that this group, with its five confidentially located shelters in New York City, was committed to serving victims of gender-based violence, and I assumed this meant domestic abuse. What I learned at the very first meeting I attended was shocking to me: that as time had passed, Sanctuary had expanded its reach to include legal services, counseling, and case management for its clients, many of them immigrants, more and more of whom were turning out to be victims of sex-trafficking.

That sex-trafficking was such a real, yet for the most part unseen and unspoken problem in New York City, horrified me. As the mother of two daughters, I felt a fear around the issue that made it almost difficult to comprehend. But as a writer, citizen, and New Yorker, I was compelled to face the problem and consider it. Since my way of living, communicating, and confronting the world is through fiction, storytelling was how I began my investigation. I attended Sanctuary meetings in order to educate myself, and also began to research the subject in more depth—all the while imagining what the life of a victim might be like, and how this cruelty could exist all around and in what ways it intersected with everyday existence in New York City.

In New York State alone, more than 4,000 underage youth are the victims of sex trafficking—bought, sold and trafficked for sexual purposes and profit each night.

Sex trafficking is defined as “a form of modern day slavery involving the recruitment, transportation, harbor, or receipt of persons by means of the threat or use of force or other forms of coercion, or of the abuse of power or of a position of vulnerability, for purposes of commercial sexual exploitation.” Here are some further things I learned: Sex traffickers target vulnerable victims and use violence, lies, debt bondage, drugs and other forms of manipulation to force them into the industry. Human trafficking (which includes other forms of modern day slavery, such as labor bondage) is a $150 billion industry worldwide. Each year, as many as 100,000 – 300,000 children may become the victims of commercial sexual exploitation. In New York State alone, more than 4,000 underage youth are the victims of sex trafficking—bought, sold and trafficked for sexual purposes and profit each night. (These statistics are from the Sanctuary website.)

As if this weren’t horrible enough, the details of the industry bring the story to shocking and disturbing life. Victims are advertised and sold, among other ways, through websites or classified ads in the back of publications. Some traffickers physically brand their victims. Recently, I heard about a doctor in New York State who found a tracking device, the kind used in pets, implanted in a patient she was examining, a woman who turned out to have been trafficked. I did not use any of those details in my book. I did, however, weave in facts I had come upon through research involving nail salons (this was before the more recent uncovering of abuses within that industry) and tri-state area hotels as locations for the activities of traffickers.

The most important finding from my research was not a single detail but a more far-reaching truth: that of the very real vulnerability of many girls across all socio-economic classes. Yes, the vast majority of victims of sex trafficking are poor women without power, but this is also a problem that can cut across class lines. More than that, vulnerability is a human condition that, to varying degrees, we can all understand. To investigate this, I imagined two girls from opposite ends of the world—rural Russia, privileged New York—and presented them with strangely similar vulnerabilities and challenges. Through the course of my writing the book, these two young women found each other and helped each other. Neva, who is taken from her family in the prologue to the novel, escapes from her traffickers and ends up working for a Manhattan family only to find that as a result she has to face the ugly reality of her past all over again; Poppy, a daughter of privilege but no less emotionally vulnerable, falls into a spiral of despair and danger. The parable or fable of their twin destinies is the story of their shared vulnerability and struggle to survive. It is a heightened, hyper-real tale that attempts to capture the intense feelings—the psychological experience—of being alive in this time and overwhelmed by the cascade of images, varieties of exploitation, deeply felt moments of connection, and emotional riptide of living on this gorgeous and dangerous planet.

Isn’t this really the essence of storytelling, of fiction: to generate communication, empathy, and belief?

That we all have the capacity for hope and survival and resilience is at the heart of the book. When I spoke to Lauren Hersch, Director of Advocacy for Sanctuary for Families, her stories of victims and their victories were inspiring. As one of her many responsibilities, Lauren runs Survivor’s Workshops, and she spoke to me about the bravery and strength of her clients. In her current workshop she had women from Mexico, Kenya, Eastern Europe, the Dominican Republic, and the United States. She talked to me about vulnerability, how it comes in all shapes and sizes; about storytelling and how the many choices involved in sharing a story—what moments to share, how to share them, whether to share them narratively or visually—made storytelling “a powerful advocacy tool”; and about the elements that so many of the stories of victims of sex trafficking have in common, despite their geographical, social, and class differences. They all share three themes: physical trauma, sexual trauma, and disbelief—by which I mean the women’s experience of not being believed when trying to tell their stories.

The patriarch of the Zane family in Burning Down the House is Steve, a real estate mogul. No one would describe him as a nice guy. He isn’t. He can be controlling and cruel and many other undesirable things. But he does have moral lines he will not cross, and he does believe Neva’s story. As Lauren Hersch recently said to me: “When someone says, ‘I believe you’, things change.” Isn’t this really the essence of storytelling, of fiction: to generate communication, empathy, and belief? Not necessarily belief in the realism of a story, not in the way Lauren is referring to her clients’ being believed, not necessarily in the way Steve believes Neva within their fictional world, but a universal belief in human feeling, in the reality of other minds, in the fact that other people have experiences—from the mundane to the terrible, from the tragic to the sublime—that are strikingly different from our own, but that can also be taken as human and true.

So there are two reasons, at least, why I chose to write about the subject of sex trafficking in a literary novel. First: because it is an urgent matter of concern to me as a mother, a writer, a New Yorker, and a citizen. And second: because to the degree that addressing the problem involves issues of narratives, and of bearing witness to someone else’s story, it is a relevant subject for literary contemplation. Any subject is fit for literary contemplation, but especially those that touch on issues of human understanding. It can be an important part of healing for survivors of any kind of abuse to share their stories and be believed. And it is an important part of living for most people to experience that kind of acknowledgment, with or without trauma. People need to have their humanity seen and respected. Fiction can provide something like this, and teach something like this. Reading a book can be a meeting of the minds. That’s what I hope for when I write a book. That’s why I try not to look away.

Jane Mendelsohn is a graduate of Yale University. She is the author of three previous novels, including I Was Amelia Earhart, a New York Times best seller and a finalist for the Orange Prize; Innocence; and American Music. She lives in New York City with her husband and children. 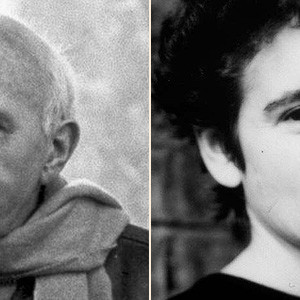 JEAN GENET VS. JEANETTE WINTERSON Our Lady of the Flowers, Jean Genet Divine and Darling. To my mind, they are the ideal...
© LitHub
Back to top