Dennis Tang on Entering a New Era in His Reading Life

My roommate was uncharacteristically blunt. “Your life’s been pretty easy so far,” she said. “And now, you’re getting your ass kicked all over the place.”

I had just turned 30 months before, and the year had not been kind. A barrage of professional failures atop one big romantic one, coming in hot, day after day. Rejection letters, rejection texts. We regret to inform you. We know this is unpleasant news. I hope we can still be friends down the road. I laid on our couch in the middle of the afternoon, staring at the ceiling and feeling ridiculously bad for myself. Instead of “coming into my own,” as was promised, I spent the first bits of my thirties getting briskly wrecked by life.

Which made me realize that to a large extent, life had been easy. Perhaps I’d never gotten exactly what I wanted, but I’d always done well enough—a life of bronze-medal finishes, for better or worse. But paradoxically, being forced to recognize how fortunate I’d been was little solace. If anything, it only magnified how naïve I’d been, how unprepared I was for failure, and how sensitive and soft I felt compared to those who’d learned early, suffered more.

In the past I’d always refocused myself, after any disappointment, on the future. I strived to be “productive,” continually moving forward. If I lost a job, I got a better one. If I got dumped, I went on a diet—and then, on as many dates as possible. I didn’t believe in wallowing, grieving, breaks, or brakes. I didn’t think that time healed all, or any, wounds. Defeat itself was something to be beaten. What doesn’t kill you, and all that.

This time was different. I didn’t feel like working on anything, or like there was anything worth working on. There were no available consolations and nothing to “win” at, no success that could come quickly enough to sweep away failure and its attendant pain. I couldn’t sleep at night, couldn’t get out of bed in the morning. I couldn’t even look at Tinder. I thought I’d felt anxiety before but this, too, was a level for which I was unprepared. Each morning, as soon as the facts of my present condition came back to me, what and what little this day would bring, I would feel my chest seize, my pounding heart constricted, like a water balloon in a tightly clenched fist. Almost worse than the feeling itself was the knowledge that would be a long while—months? years? forever?—before any of it might change. How did anyone live like this? How could I, and for how much longer?

It was in the throes of this all this—sifting through my backlog of New Yorker issues, as one does—that I came across Mary Gaitskill’s story “Acceptance Journey,” in which a 57-year-old woman named Carol has left her husband and subsequently a volatile paramour with whom she was sharing a motel room. By the generosity of an acquaintance who takes pity on this “divorced and ‘struggling’” soul, Carol lands a temp job in a small college town. After sleeping in her car the first night, she spends her time performing administrative toil by day and living in the annex to a larger, empty house by night, and remains haunted throughout by her guilt, her pain, and the deep, inarticulate yearning in her heart that drove her to blow her life apart. “[B]eing attached to an empty house felt like being attached to the ghost of her marriage,” writes Gaitskill, “unable to live in it or to get away from it.” Though Carol has run away, she has not escaped.

It was the kind of story I’d never taken to before: quiet stories about quiet distress, often written by and about older women, whose points had previously gone over my head. Years before, while reading Alice Munro in a graduate seminar, I’d decided to finally speak my mind and said, in the most diplomatic terms I could muster, that I didn’t quite understand the author’s ostensibly universal appeal. I didn’t say it in so many words, but privately I suppose I craved bombastic experimentalism, speculative and high-conceptual gambits. I couldn’t comprehend why these thick volumes of quiet stories set in quiet middle-class Canadian towns were so beloved. At the time, I thought it was a fair question to pose. My male professor, whom I idolized for his own cutting-edge fictions, nevertheless looked at me like I was an idiot.

But where Munro had gone over my head, Gaitskill’s story was suddenly engrossing. Quite unlike me, Carol is not chasing an idea of “productivity.” Instead she finds ways to empty her mind, kill time. “There was peace in this,” Gaitskill writes. “She watched the news while exercising with a hula hoop for twenty minutes, ate, played with the cat, then walked around the neighborhood feeling her body shifting tectonically under her brain.” She has dinner with the neighbors, and spends most nights watching bad TV:

Sometimes Carol watched, drank, and cried […] Once, she passed out crying and woke at two in the morning with her face numb against the disgusting carpet, her phone clutched in one handand the worried cat pawing her ear.

Where would she go after this? How could she live? How were any of them going to live?

Despite the title, “Acceptance Journey” doesn’t contain much of a journey, and certainly no destinations or grand epiphanies—just a formless future of hurting, and the need to find some way to coexist. “She thought of her prayers,” Gaitskill tells us, at the story’s end. “She felt wonder and pain. But she didn’t concentrate on either.” Instead, Carol moves forward, through a bitter time of life that simply must be endured.

Eventually I realized that I couldn’t bulldoze my way out of my own suffering, either. Somehow, I’d have to learn to live with it, and so I began to construct my own rituals of coping. I made cookies. I biked aimlessly around the city, when it was too icy and windy to think about anything but staying upright. I, too, drank a lot, and started smoking again—no one said coping had to be healthy, right? I listened to Lucy Dacus’s “Night Shift” on repeat until the words lost all meaning, and only the feeling was left. Day after day passed, without even the cadence of different songs to keep them distinct.

And of course, I read. Stories like “Chaunt” by Joy Williams, which takes place in a fantastical colony city for terminal grievers, and centers on a woman whose son was killed in an automobile accident. And Lydia Davis’s “Five Stages of Disturbance,” in which a woman on the verge of losing her apartment passes the days, spiraling into anxiety. And Amy Hempel’s “The Dog of the Marriage,” in which a woman whose husband has left her focuses on her job raising guide dogs for the blind, and who says, with loads of dual meaning: “There is a Zen-like quality to this work, if you can find reward in staying in the moment and in giving up what you love because someone else’s need is greater.”

There was a stoicism and a dignity to this literature, all about the kind of pain that cannot be beaten and must be waited out, that seemed to provide the only balm for my present. It made me think that there was something quintessentially male, American, capitalist, or all of the above about my reaction to failure. The constant need for forward progress, the reflex to suppress emotion in favor of action, a conviction that action alone would fix what was broken about oneself, that every setback would become a net gain, given enough time and hard work. My flaw was an inability to simply accept, to withstand and live with life as it was.

Which led me back to Munro. In her story “What is Remembered,” a married woman named Meriel has a single afternoon’s dalliance with a doctor during a ferry trip to visit her mother’s friend. On her way back alone, Meriel is already undertaking the work of keeping her transgression and her passion contained, so as not to endanger the home she has built:

The job she had to do, as she saw it, was to remember everything—and, by remember, she meant experience it in her mind, one more time—then store it away forever. This day’s experience set in order, none of it left ragged or lying about, all of it gathered in like treasure and finished with, set aside.

Though she never sees the man again, Meriel does not, cannot, set it aside. The memory lingers and she experiences “wave after wave of intense recollection […] at gradually lengthening intervals—for years to come.” She eventually learns that the man has died in a plane crash, and still this does not quell her longing. Her daydreams of reuniting, finding that thing again, are untethered even to the finality of death. “They had to wear themselves out in a way she did not control and never understood.” Meriel can’t move on by finding something better, or indeed by doing anything. Her heart’s desire is denied an outlet for decades, but she nevertheless finds a way.

These stories of 57-year-olds having blown it all up and secret 30-year fantasies that never come true: they not only put into perspective the relative pittance of setbacks I’d experienced, but how showed me how one perseveres through it all and persists through that pain and longing which carries no expiration date, no promise of ever going the hell away. In various ways, these characters comprehend life’s limits, its essential tragedy. That the lovely thing you briefly had is past. And that maybe you’d never get it back, nor anything nearly as good. That maybe nothing would ever arrive to sweep away the heartache.

Gradually, after a number of days I could count but no longer care to, filled with long bike rides, baking projects, and more and more reading, the daily panic attacks went away. The hurt itself didn’t. But I returned, slowly, meekly, to the process of getting back on my feet, and finding a way forward. I still have much to figure out about why a brief encounter with failure wounded me so badly. Why of the successes I have had, none of it ever felt like winning. After all, I was more privileged than the women about whom I was reading, had suffered less, and yet had reacted as I did. After learning to live with one’s emotions, there remains the work of uncovering their source.

Either way, I’ve begun to realize that healing is its own end, not a means to some greater, future reward. That sometimes it’s just the slow crawl, undertaking the work of reflection and introspection while the passing of seasons does the rest.

But with any luck, I’ve got time to spare.

Dennis Tang is a teacher at Columbia University, where he received his MFA in fiction. A former editor at GQ, his work has also appeared in Esquire, The Wall Street Journal, and elsewhere, and he is nearly done with his first novel, he swears. 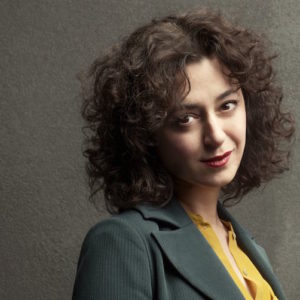 Today I’m talking to Turkish-born author of How To Lose a Country, Ece Temelkuran. Ece is many things to many people:...
© LitHub
Back to top