When Life Is Worse Than Fiction

One of the most important rules I learned about writing fiction from my MFA is that an author has to put her protagonist through hell. I embraced that notion, subjecting the protagonist of my novel—who was loosely based on me—to blow after blow in her romantic relationships. But something really terrible had to happen to her. I struggled to come up with something; perhaps subconsciously, I had reservations about brutalizing my fictional alter ego quite so much. Stepping over that thin line between fact and fiction, I asked myself what would be the worst thing that could happen to me. The answer came quickly: if my dad died. Even though it felt morbid, it was perfect for the novel. My protagonist’s dad suffered an aneurysm at a party thrown to welcome her home from a disastrous year abroad. I wrote hospital scenes, conversations with doctors, researched brain function and failure, and then wrote about the dad’s death. It was incredibly hard to write but it worked for the narrative.

Two months after I wrote that chapter, my healthy dad was diagnosed with stage IV colon cancer. Three months after that, he died. The novel was no longer fiction. I was devastated over his death, of course, but also at a loss as to what to do with the novel. I didn’t know if I should keep working on it, or even if I could. Now there was no “loosely based on.”

As I was sorting through this, I attended a reading by an author who was in the World Trade Center on September 11th. He read from a work of fiction about that day, and I found myself thinking, you were there. You saw and smelled and felt; you were terrified, you prayed, you pictured your own death. Why package all of that as fiction?

Once I heard him read his thinly veiled fictional version of his own experience, I realized I couldn’t do it myself. Whether this was based on ethics, ideology, or artistry, I’m not sure. I too had been near Ground Zero, and I had never entertained the notion of fictionalizing 9/11 because, I felt, the experience was too real and belonged to too many people. How was this different from writing about my dad? I simply could not fictionalize my dad’s death and its aftermath. It would disingenuous. This was my vulnerability, my pain, my ugliness; I didn’t want to pass them off as belonging to a fictitious character. I turned to nonfiction.

Making that decision was only the beginning. First, I felt foolish for casting aside a project I’d spent two years on. But I also felt strange about ‘capitalizing’ on the worst thing that had happened to me and my family in the name of art. Though I had moved back to Michigan soon after my dad was diagnosed, took him to weekly chemotherapy sessions, and spent the last eight days of his life at the hospital, often sleeping in a folding chair bent over the side of his bed, I couldn’t help wondering if I was the right person to tell the story. It was his story, even if he wasn’t around to tell it. Did that mean I should tell it? Did I really want to embark on a project that, at its center, was about his death?

I had misgivings about nonfiction as a genre as well. Of course, all writers wonder whether anyone really cares about what they have to say (while perfectly competent, there were plenty of books that ultimately left no impression on me). To me, this was the most catastrophic result imaginable. I’d rather people hate my work than instantly forget it. While this fear transcends genre, it became a veritable beast when I started writing nonfiction. The “other than me, who cares?” question echoed in my head. Most writers believe their experiences to be unique and profound—why else would they bother writing them? But this can border on ego-centricity; the need for confession and unburdening can eclipse the reader experience. I believed I had something important to say, but would anyone else agree? If not, could I recover as a writer? As a person?

The answer to the “who gives a shit?” question, for me, lies at the heart of essay writing: making the personal universal. My experience of my dad’s death was mine, but that experience was just a small fraction of all the other experiences of his death and a smaller fraction yet of all human experience of death in general. Delving into how “real” writers managed to make readers care was instructive. As I read Joan Didion’s The Year of Magical Thinking, a little voice in my head said, “Yes, exactly, yes…” To say her book is about the death of her husband is laughably reductive. Her book is about everything.

Other literature, including fiction—sometimes about death, sometimes not—helped me figure out the demarcations between invention, appropriation, and the natural limitations of first-person narrative. Books such as Don Delillo’s White Noise, Kazuo Ishiguro’s Never Let Me Go, Albert Camus’ The Stranger, and even Barack Obama’s Dreams from My Father eased my fears and helped me learn how to tell a story informed by someone else’s point of view, rather than a story that inhabited, ignored, or invented it. There’s no inherent virtue in invention. It can be dangerous to befriend a writer. Even though most writers do what they can to avoid hurting people, that’s not the same as leaving people or their stories alone. Somewhere along the way, I realized that invitation, not invention, is the key to making readers care. Death, even the death of my dad, wasn’t mine. It belonged to everyone.

I learned to balance “claiming” and “sharing” the memories of my dad. A few days before he died, my mom, brother, sister, uncle, and I brought some pictures and trinkets and set up a little altar at his bedside. We told old stories. Certain memories were particularly accessible for him—watching the Red Wings blow out the Colorado Avalanche in a playoff game with my brother and me, leaving a note on Mom’s windshield asking her out on a date, bringing my adopted sister home from Ukraine. He told us what he loved most about each of us. I couldn’t invent anything more powerful.

I never returned to the novel. I didn’t need to invent details, feelings, or dialogue to tell the story I wanted to tell. I have other ideas for novels I hope to get to someday. For now, I’m taken with nonfiction and the notion of writing about a world shaped by an experience, rather than an experience shaped by a world. We all inhabit worlds that change without warning, and I can write about navigating such a world because it’s one of many such stories, rather than the definitive one.

Before he died, I told my dad about the plot of my novel. I had to know what he thought I should do, whether he’d be freaked out by the coincidence, or even offended. He was completely unfazed. He agreed it was a bit strange, but he advised me not to change the story, not to make the dad live if that wasn’t what was supposed to happen. He had to be aware of the eerie irony of those words, but in saying them he simultaneously drew and erased the line between the story I was telling and the one he was living. He gave me permission to write what worked best, whether it was invented or real. The choice belonged to me.

Joelle Renstrom is a writer living in Somerville, MA. Joelle's award-winning blog Could This Happen? explores the relationship between science and science fiction. Her work has appeared in Slate, Guernica, The Toast, and others. Joelle teaches writing and research with a focus on space, artificial intelligence, and science fiction at Boston University.
http://www.joellerenstrom.com 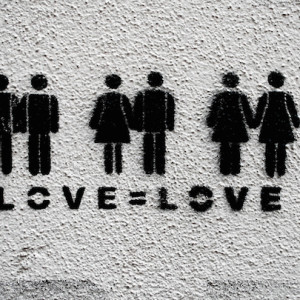 This morning, no matter the ruling the Supreme Court returns with on marriage equality, few calls to action are as necessary...
© LitHub
Back to top