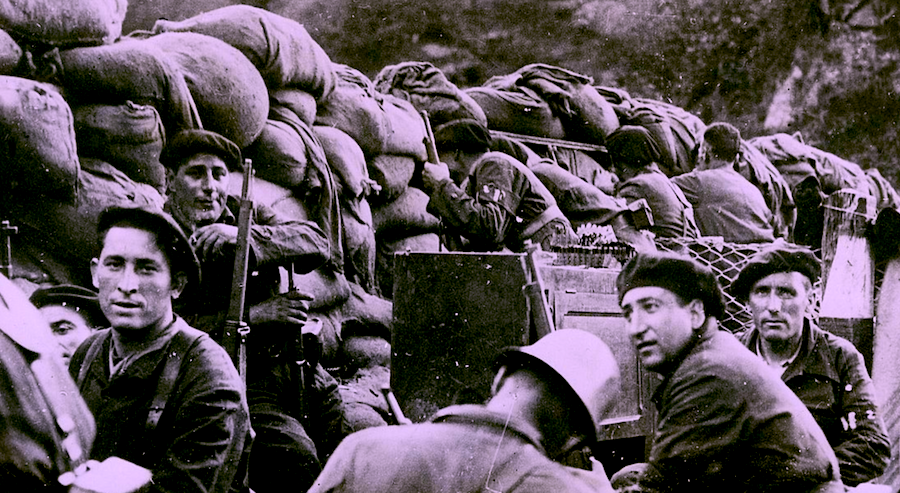 Why George Orwell’s Homage to Catalonia is necessary reading for the 21st century.

George Orwell probably hasn’t stopped spinning in his grave since that Apple Macintosh commercial came out in 1984. You know, the one with the lady in red gym shorts who throws a big old hammer at Big Brother, at which point we are told that 1984 won’t be like “1984” if we buy a certain brand of computer?

Since then Orwell has been one of the most referenced, least *actually* read writers of our time, co-opted by political operators of all stripes to provide moral-ideological substance to otherwise superficial positions of aggrievement and power-anxiety; his very name has become a catch-all condemnation of little to no meaning. And when people go so far as to reference his actual writing, it is Orwell’s fiction they turn to—1984 and Animal Farm, specifically—didactic allegory available to whichever political interpretation you’d care to make as you argue in a bar (sigh) or (more likely now) on Twitter.

Which is why I am here to once again ask you to read his nonfiction. This is not a particularly radical position: The Road to Wigan Pier, Down and Out in Paris and London, and Homage to Catalonia are all acknowledged classics of full-length, immersive, reported memoir, perennially relevant for their investigations of class, precarity (a word Orwell probably wouldn’t have liked), and power. It is Homage to Catalonia—which hit UK bookstore shelves 83 years ago today—that remains for me an essential, heartbreaking account of idealism’s limitations.

As much lament as homage, the book recounts Orwell’s experiences during the Spanish Civil War fighting on the Republican side with the POUM militia against the fascist-monarchists. International communism in the 1920s and 30s was a messy, decentralized movement of labor trade unionists*, utopian agrarians, socialist-anarchists, Trotskyites, Leninists and… Stalinists. POUM (Partido Obrero de Unificación Marxista), one of dozens of socialist organizations formed in response to the Great Depression, was a Marxist-Trotskyist workers’ party, and as such was more concerned with conditions in Spanish factories than party power structures in Moscow. The Stalinists, much to Orwell’s profound disappointment, were more concerned with maintaining—and exercising—that power than with winning the civil war.

And this is where the fervor and the factionalism of the Spanish Civil War—as described by Orwell, at least—echoes the resurgent left of the current moment. Orwell does his best to catalog and situate assorted political factions on an ideological spectrum but it feels a bit like eavesdropping on someone trying to explain the various threads of Left Twitter: everyone is preoccupied with the smallest details of ideological purity. But instead of endless bro-driven cycles of retweeted rancor, these small political divisions had deadly, real-word consequences in 1936. If there is one modern-day lesson to draw from Homage to Catalonia it is perhaps that when we draw the line between what is for one person compromise and another capitulation, we should draw it in pencil, not blood.

Orwell was devastated at the failure of the Spanish Republic, heartbroken in the way only a romantic can be. POUM was declared an illegal organization by the Stalinists and Orwell would eventually flee to France with not much more than a bullet wound to the neck to show for his trouble. His experiences of the civil war—specifically the murderous, totalitarian maneuvering of the ascendant Stalinists—left him bitterly disillusioned about the prospects of state communism and would inform the skepticism of his later writing, including the aforementioned, oft-quoted fiction. Despite that, hope is not totally absent from Homage to Catalonia, though it is reserved for the small-scale decencies of people themselves, not the larger systems within which they are forced to live.

To which I can only say yes.

*Disclosure: I come from a family of Scottish trade unionists and my great uncle Jamie made the trip down to fight in Spain for the Republicans.