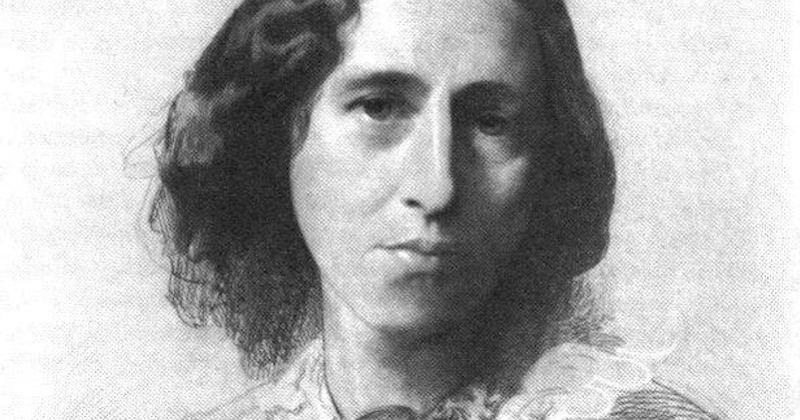 On this day in 1819, novelist, poet, and translator George Eliot was born Mary Ann Evans in Warwickshire, England. Eliot’s mother died when she was 17 and in 1841, Eliot and her father moved to Coventry, which later provided inspiration for Middlemarch. After the death of her father in 1849, she went abroad, then eventually settled in London and worked as an editor at the progressive Westminster Review. This position led to meeting George Henry Lewes, her married lover, who encouraged Eliot to develop her ideas and write. In fact, her pen name was a not-so-subtle nod to Lewes, which she used as a response to combat industry sexism and create some distance between herself and the Victorian impropriety of having an affair with a married man. Following the death of Lewes, Eliot married John Cross, a man 20 years her junior.

Although it’s not accurate to say that Eliot held misogynistic tendencies, she wasn’t too kind in her opinion about fellow female novelists. Her thoughts were revealed in her anonymous essay, “Silly Novels by Lady Novelists,” which was published in 1856 in The Westminster Review. She criticized the characterization of women that were often found in these narratives, arguing, “Silly Novels by Lady Novelists are a genus with many species, determined by the particular quality of silliness that predominates in them—the frothy, the prosy, the pious, or the pedantic. But it is a mixture of all these—a composite order of feminine fatuity—that produces the largest class of such novels, which we shall distinguish as the mind-and-millinery species.”

Some of her criticisms are reminiscent of the complaints lobbed at contemporary tropes such as the “Mary Sue” or even the “Cool Girl,” as seen in Gillian Flynn’s Gone Girl: “Her eyes and her wit are both dazzling; her nose and her morals are alike free from any tendency to irregularity; she has a superb contralto and a superb intellect; she is perfectly well dressed and perfectly religious; she dances like a sylph, and reads the Bible in the original tongues.”

However, Eliot wasn’t totally averse to all novels written by women. Notably, she was friends with Harriet Beecher Stowe.

You can read the entirety of Elliot’s essay here.