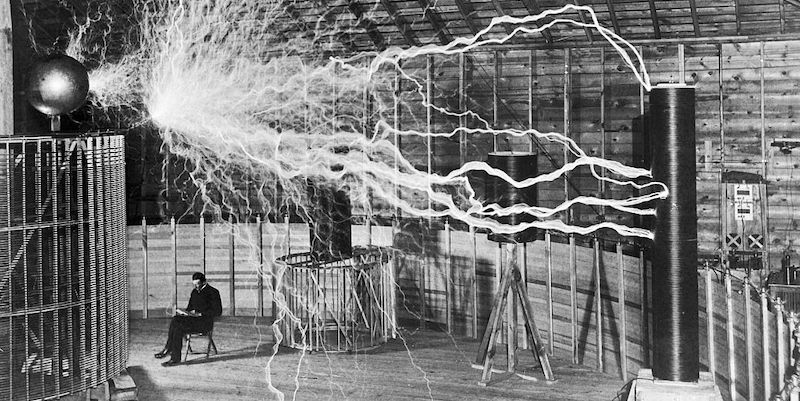 Over the years, I had become resigned to the idea that I’d never make my Tesla movie. A science-fiction film set in the late nineteenth century—what could be more expensive, more outlandish, more out of reach? There were rumors and reports, spanning decades, of Tesla films in development, including concrete projects by Dusan Makavajev, David Lynch, Julie Taymor, and Jim Jarmusch—and I was more than a little curious about them, receptive from a reasonably envious distance. None of these materialized.

But in 2006 Christopher Nolan delivered The Prestige, inserting Tesla as a sorcerer-for-hire, a suitably unlikely deus ex machina, in a feud between two Victorian magicians. In casting David Bowie, Nolan unapologetically pitched the story into the realm of pop mythology, enlisting the iconic man out of time to play an iconic man out of time, the inventor of a trapezoidal box that teleports matter (first top hats, then magicians) when the torrid, gyrating plot requires it.

Of course, just about everything Bowie/Tesla does and says in this movie is, you know invented, though Nolan’s script (written with his brother Jonathan, based on Christopher Priest’s novel) is familiar enough with historic fact to intercept Tesla during his photogenic researches amidst the mountains of Colorado Springs. “We do our tests when the townspeople are asleep,” Tesla’s henchman explains to Hugh Jackman one hazy blue night, while Jackman kneels over a wirelessly glowing incandescent bulb planted in prairie soil, surrounded by dozens of identically glowing bulbs stretching to the horizon. “Mr. Tesla doesn’t want to scare anyone.”

Tesla never accomplished this miracle, never created a resplendent field of wireless light, though he claimed he’d get to it, and the image is compelling, provocative, measured against Tesla’s actual, eventual failure. The spectacle has no greater point in Nolan’s movie than to set the stage for Bowie’s impressive entrance when he welcomes Jackman to his lab, striding through a latticework of dancing CGI lightning. It’s Bowie all right, but his Tesla seems almost disembodied and blank—a gentlemanly hologram, looking permanently vexed. We soon see him chased out of Colorado by Thomas Edison’s “agents”—a complete fabrication—and this hasty departure prompts Tesla’s tart, pseudo-philosophic note delivered in voice-over: “The truly extraordinary is not permitted in science and industry. Perhaps you’ll find more luck in your field”—the field of outright magic—“where people are happy to be mystified.”

Tesla shows up later in the tale, in Europe, comfortably “retired” (another fabrication), a world-weary mandarin who’s nevertheless ready to grant technological aid to Jackman, since he, Tesla, understands the nature of obsession only too well.

As if extrapolating from Arthur C. Clarke’s axiom—technology of the future is indistinguishable from magic—Nolan presents Tesla as the ultimate magician, a nineteenth-century Mandrake, suave and impenetrable. The portrayal centers on sheer mystique, ignoring the inventor’s actual agenda and personality. There’s no place in The Prestige for Tesla’s germaphobia, his haplessness with money, or the romanticism radiating from his public statements. Which may have been a fine approach, avoiding outright corniness, though it leaves Bowie dangling, tasked with playing a cipher, a sphinx.

[Elon Musk] has embedded himself in the hard-edged, ready-or-not, commercialized world in a way that Tesla, steered by a mystical temperament and uneven luck, never could.

But sure, of course, this is a movie, an admirably unclassifiable fabulation engineered to throw off sparks by mixing glowering Victorian archetypes with vaguely metaphysical notions concerning fate, illusion, and fanatical perfection of craft. Actorly gravitas, luxuriant production design, and state-of-the-art effects give the movie weight.

Though it can also be argued that Nolan’s characters, more than his plot devices and sets, are like magicians’ cabinets, equipped with false bottoms and trick compartments; the story is a contraption, all hinges, twists and trap doors, and The Prestige turns out to be, above all else, a celebration of trickery.

Though modest by Nolan’s blockbuster metrics, the movie was a hit, grossing three times its $40 million budget—yes, people are happy to be mystified—while incidentally introducing Tesla’s name and aura to a broader audience, just ahead of Elon Musk’s worldwide branding. Tesla Motors manufactured their first completely electric Roadster in 2008, and the first car was sold in February of 2009, priced at $109,000.

While struggling to make Tesla, I’d learned to shrug whenever people asked why I didn’t get Elon Musk to fund the movie. Musk didn’t name his company, I’d point out; he inherited the name from Tesla Motors’ first CEO, Martin Eberhard, a former electrical engineer and a Nikola Tesla enthusiast, who was dining with his future wife, Carolyn, in Anaheim, CA—at Disneyland, in fact, in a restaurant inside the Pirates of the Caribbean ride—when he suggested naming his fledgling company after the brilliant, underappreciated inventor. Carolyn granted instant approval, after having heard Eberhard pitch alternate names over preceding months. And so, in the spring of 2003, an impecunious, intransigent Serbian-American loner maverick became the fitting if unlikely Mickey Mouse mascot for a company that manufactures electric sports cars.

Musk entered the picture the next year, with an investment of $7.5 million. He contributed significantly to the car’s design and the company’s rising profile, and by 2008 he was the new CEO, having staged a boardroom coup, forcing Eberhard out. Although the original founder’s departure involved a non-disparagement agreement, Eberhard recently commented on his ouster, at a discreet distance, during a 2019 visit to Delhi, when he talked to India’s Economic Times: “It was the brick on the side of the head. I did not see it coming at all. I have learnt to distrust people a bit more.”

Tesla Motors evolved, with breathtaking worldwide impact and notoriety, into Tesla, Inc., and Musk’s other companies and side projects have proliferated and prospered, reflecting a work ethic and a global/cosmic ambition rivaling the extraordinary career paths taken by Edison, Tesla, and only a few other unique tech giants of their day.

Plainly enough, Musk—multiply married, the father of six children, a sparklingly confident, charismatic man with a habit of success and an undeniable aptitude for branding and promotion—has more in common with Edison than with his company’s self-contained, self-destructive namesake.

You can catch Musk on YouTube in a 2015 interview, pledging his higher allegiance to the pragmatic American populist:

The reason it is called Tesla is because we use an AC induction motor, which is an architecture that Tesla developed, and the guy probably deserves a little more play than he gets in society. But on balance I’m a bigger fan of Edison than Tesla, because Edison brought his stuff to market and make those inventions accessible to the world, whereas Tesla didn’t really do that.

Musk can be forgiven—at least, I forgive him—for failing to note that Tesla constantly tried to bring his stuff to market, as market forces continually got in his way. The bottom line is this: Elon Musk, ranked as I write this as the richest person in the world, values the concrete usefulness of inventions and ideas above their free-floating potential. He has embedded himself in the hard-edged, ready-or-not, commercialized world in a way that Tesla, steered by a mystical temperament and uneven luck, never could.

Throughout Joe Rogan’s 2019 interview with Musk, a podcast running two-and-a-half hours and universally viewed, as this book goes to press, over fifty-two million times, Rogan giggles a good deal while Musk seems perpetually on the brink of cracking up, his mouth puckering, his cheeks lifting as he smiles and bites back laughter.

Wearing an Occupy Mars T-shirt, Musk confesses his love of Spaceballs, the 1987 Mel Brooks Star Wars parody. He sips Old Camp whiskey and notoriously takes a puff from a cigar laced with cannabis, supplied by his encouraging host; but recessive Tesla-like attributes and undercurrents can be glimpsed within the goofy banter. “I don’t think you’d necessarily want to be me,” Musk offers. His mind, he adds, “is like a never-ending explosion.”

“You’re a weird person,” Rogan notes—the nearest he comes to offering his guest a challenge. Musk shoots back: “I agree.”

As the conversation winds down, Musk expresses the desire for a “future where we are a space-faring civilization and out there among the stars.” He fuses this with a benign company credo, the wish “to make useful things . . . [and] make the future exciting, something to look forward to.”

They end on a note of outright sappiness, with Musk sounding both brittle and wistful:

MUSK: Many people do not like humanity and consider it a blight but I do not . . . May sound corny, but love is the answer.

ROGAN: It is the answer.

MUSK: Wouldn’t hurt to have more love in the world.

ROGAN: How you gonna fix that? Have a new love machine you’re working on?

This sweetness seems to have receded over the last two years. In the thick of the pandemic, Musk broadcast his displeasure at the prospect of his profits being threatened by government lockdowns and in July 2020 a succession of tart tweets hit a crescendo with Musk declaring “We will coup whoever we want! Deal with it.”—reflecting his approval of the overthrow of democratically elected Bolivian president Evo Morales, who had resisted Musk’s grab for lithium deposits in his country’s mines.

So much for universal love.

Am I straying too far from my avowed subject? Perhaps. Tesla shared Musk’s proclivity to talk about “humanity,” aiming at nothing less than uplifting the race, but he almost never ventured into the definably muddy water of political engagement, government policy, public debate. And love, as I’ve said, was never part of his vocabulary.

It is not simple to be able to love calmly, to trust without ambivalence, to hope without self-mockery, to act courageously, to perform arduous tasks with unlimited resources of energy.

I gave these words, from an atypically personal essay by Susan Sontag (“Trip to Hanoi,” 1968), to Anne Morgan, trimming some phrases, beveling off the literary edges. I felt the need to push past mere wistfulness, to press Anne’s case, to imagine her asking, for perhaps the first and only time, if Tesla could meet her halfway.

He deflects her, of course, can’t meet her eyes.

Though he might have pretended to misunderstand, and to deliver a quote from Confucius, as the elusive, high-minded Sontag once did when asked to draw a self-portrait: “Each of us is meant to rescue the world.”

What would Elon Musk say to that? 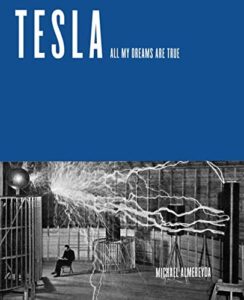 Adapted from Tesla: ALL MY DREAMS ARE TRUE by Michael Almereyda, published by OR Books. 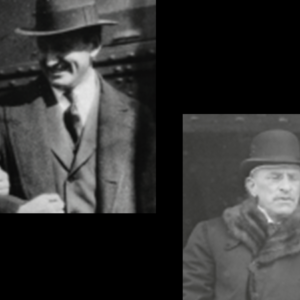 “I never look back.”  In a career unlike any other in the annals of American law, he prosecuted every order of crime...
© LitHub
Back to top
Loading Comments...