Why E.B. White Was Wrong About (Some of) the Elements of Style

Lovers of the Passive Voice Unite

Dorothy Parker famously quipped, “If you have any young friends who aspire to become writers, the second-greatest favor you can do them is to present them with copies of The Elements of Style. The first-greatest, of course, is to shoot them now, while they’re happy.” It’s rare to see a Parker quip-compliment, so I don’t take it lightly. But today, 118 years after the birth of E.B. White, and some 18 years after I first encountered his classic style guide (originally written by William Strunk Jr. in 1918—this is getting spooky—but much expanded by White), it’s time to admit that it’s not all it’s cracked up to be.

Now, don’t get me wrong, there is a lot of important information in The Elements of Style. The very first rule, “form the possessive singular of nouns with ‘s,” for instance, is still necessary and oft-unheeded. Much of the following advice is also useful. Revise and rewrite. Use orthodox spelling. Do not use dialect unless your ear is good. “Start sniffing the air, or glancing at the Trend Machine, and you are as good as dead, although you may make a nice living.”

I am not the first writer to suggest that the book has some problems. But even in 2017, The Elements of Style occupies a pride of place in the canon of literary how-to manuals, with many teachers holding it up Bible-ishly, and with many students following it to the letter. Some may swear by it, but let’s be clear: this book is not the be-all-end-all, especially for literary writers. I recognize that this guide is not aimed at professional writers, but rather beginning writing students, many of whom do in fact need to be told that clarity is king—but still, rules learned early on can be tough to shake, and almost all of us learned, at least a little, on Strunk & White.

I have the typical qualm with a lot of the advice—don’t use active voice, paragraphs should be more than one sentence, place yourself in the background, avoid foreign languages—the typical qualm being, of course: well, not always. Personally I quite like the passive voice. Paragraph-long (and even page-long) sentences can be fantastic. Nabokov’s novels are full of foreign languages, and if Nabokov did it, it can’t be wrong. But one can generally assume that any given “rule” or piece of advice comes with a “not always,” so I won’t go through all of these one by one. Instead, I’ll just highlight a few that I find particularly annoying.

First off, we have Rule Sixteen. Rule Sixteen implores the writer to “prefer the specific to the general, the definite to the vague, the concrete to the abstract.” The book presents two examples, the first, in each, being “wrong”:

A period of unfavorable weather set in.
vs.
It rained every day for a week.

He showed satisfaction as he took possession of his well-earned reward.
vs.
He grinned as he pocketed the coin.

I see what they’re saying there, but I actually prefer “a period of unfavorable weather set in,” if only because it’s less usual and banal—and I think the sense of it is actually quite different than “it rained every day for a week.” It’s an atmospheric statement as opposed to a literal one, and at least to this reader, it is much more evocative. But in any case, the rule goes on:

If those who have studied the art of writing are in accord on any one point, it is this: the surest way to arouse and hold the readers attention is by being specific, definite, and concrete. The greatest writers—Homer, Dante, Shakespeare—are effective largely because they deal in particulars and report the details that matter. Their words call up pictures.

Well, as one who has studied the art of writing, we are certainly not in accord. By no means do I think any of those three writers are primarily effective because of their “definite, specific, concrete language.” Shakespeare may report the details that matter (whatever that means), but his work is full of elaborate wordplay, extended metaphors, ellipses and poetic interludes, and even if it weren’t, he’d still have a lot more going for him than concrete sentences.

But don’t take my word for it. A recent piece in the New York Times attempted to explain Jane Austen’s enduring popularity by unpacking her word choices; the authors found the language in her six novels to be more abstract than concrete (or “physical”) and more quotidian (that is, referring to “emotions and time”) than dramatic (“Medieval stuff”). The authors describe Austen’s place on the chart as “related to a higher-than-average propensity for words like quite, really and very—the sort that writers are urged to avoid if they want muscular prose. It also connects to time markers and states of mind: always, fortnight and week; awkward, decided, dislike, glad, sorry, suppose.” So we are to avoid the very language that has made Jane Austen one of the most beloved writers of all time?

Actually, this study also flies in the face of another of the style guide’s dictums: Avoid the use of qualifiers. “Rather, very, little, pretty—these are the leeches that infest the pond of prose, sucking the blood of words,” says White. And yet, the authors of the aforementioned article noted that “Austen used intensifying words—like very, much, so—at a higher rate than other writers. The study linked this intensifier use to a crucial trait of her writing, one that might at first seem to resist quantification: irony.”

This is not to say that White’s suggestions are without merit, only that the presence of such a major counter-example seems to suggest that there is nothing hard nor fast about these rules.

Next, there’s the infamous rule seventeen: Omit needless words. That is:

Vigorous writing is concise. A sentence should contain no unnecessary words, a paragraph no unnecessary sentences, for the same reason that a drawing should have no unnecessary lines and a machine no unnecessary parts. This requires not that the writer make all sentences short, or avoid all detail and treat subjects only in outline, but that every word tell.

I’m sure my hesitation with this one is obvious. What about David Foster Wallace, or Woolf, or Proust, or any other writer of elaborate prose whose work might, under a strict editor following these guidelines, have been unfairly diminished? Maybe you think Infinite Jest could have used a cut or two, but surely you can’t accuse it of being anything less than vigorous. “Rich, ornate prose is hard to digest, generally unwholesome, and sometimes nauseating,” White writes. Unwholesome! How bizarrely moralistic and patently false. Whether it is nauseating to him, of course, is his business; this is merely a matter of taste—which gets at the crux of my argument here. None of these rules apply to everyone, so presenting them in this way is somewhat disingenuous. And in White’s case, more than somewhat crotchety.

Speaking of elaborate prose, in the book’s final section, “An Approach to Style,” White cautions,

Young writers often suppose that style is a garnish for the meat of prose, a sauce by which a dull dish is made palatable. Style has no such separate entity; it is nondetachable, unfilterable. The beginner should approach style warily, realizing that it is an expression of self, and should turn resolutely away from all devices that are popularly believed to indicate style—all mannerisms, tricks, adornments. The approach to style is by way of plainness, simplicity, orderliness, sincerity.

Of course, it is true that in good writing, style cannot be separated from content—form doesn’t follow function in literature; form is function, and function form. But here we have two essential arguments for how to approach style, neither of which I find wholly satisfying: one is be yourself (“it is an expression of self”) and the other is be plain (“plainness, simplicity, orderliness, sincerity”). First of all, what if you are essentially not plain? Surely, James Joyce’s mannerisms, tricks, and adornments were sincere enough. Secondly, is style really so nebulous and unruly that it must be approached warily? Is it not something that can be developed and used—for adornment or unadornment—like the tool that it is? If not, then why write a whole book about it?

Then there’s the final “reminder” of the book: “Prefer the standard to the offbeat.” White primarily uses this section to argue against adopting language from business and advertising, and whatever other lingo the kids are throwing around these days (psyched, nerd, ripoff, dude, geek, and funky are words he expects are already out of date, but other than funky . . .). He’s careful not to completely discount irregular prose, but writes:

The intent is to suggest that in choosing between the formal and the informal, the regular and the offbeat, the general and the special, the orthodox and the heretical, the beginner err on the side of conservatism, on the side of established usage. No idiom is taboo, no accent forbidden; there is simply a better chance of doing well if the writer holds a steady course, enters the stream of English quietly, and does not thrash about.

Which I understand. As a writing teacher, I know that most people need to master the rules before they can break them. But as a reader, I love to see the thrashing. I almost always prefer the offbeat to the standard—in word choice, in subject matter, in structure. Even in beginning writers, who haven’t had the nonsense knocked out of them yet, and who still have a chance to be wildly themselves. But again, that’s my personal preference. I suppose I am simply arguing that there is no writing guide that can actually teach you style with any skill. It’s in choosing which rules to learn, and which to break, and when, and to what end, that you can begin to construct your own.

The Scottish writer and comedian A. L. Kennedy has published seven novels, including Day, the 2007 Costa Book of the Year, as well as works of non-fiction, collections of short stories, screenplays and radio dramas. 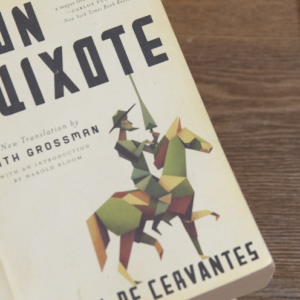 “The first song is about rescuing,” said Stephen Haff, “and now we're brainstorming what we want to rescue.” On...
© LitHub
Back to top