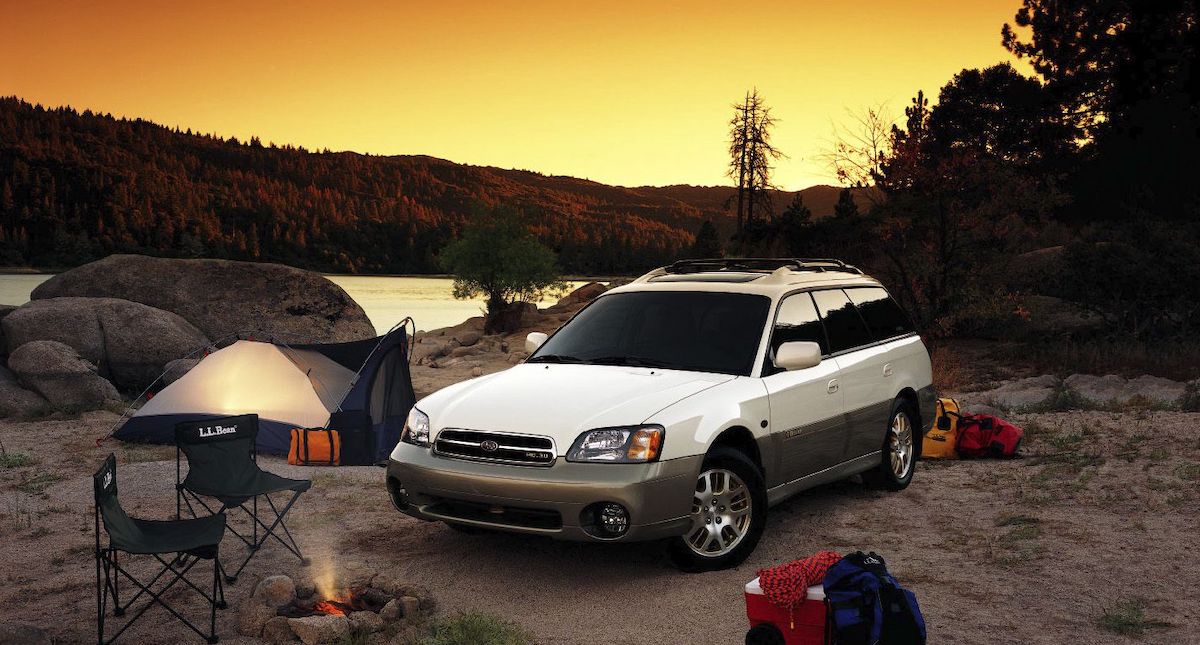 A recurring perception of queer and lesbian-identified women in the United States is that we don’t buy anything. Unlike our queer male counterparts, many advertisers aren’t looking to court a lesbian customer base, as was reported in the 2016 BuzzFeed piece “Attention, Advertisers: Lesbians Buy Stuff, Too.” Reporter Lauren Strapagiel attributes this lack of broad corporate endorsement to “stereotypes of lesbians as frumpy shut-ins who don’t care about nightlife or fashion.” But the stereotypes are persisting, alongside growing reports that lesbian bars are disappearing in the United States, and have been for the past decade. Current data on this is sparse, which means speculation is high. Intersecting theories range from accessibility of dating apps to gentrification to queer women partnering up to stay home to expanding needs of queer spaces in the first place, especially for those beyond the gender binary. But regardless of what we ultimately learn about the demise or shift of physical businesses for queer women, a crucial piece of data is that queer women don’t have any money—not as a group.

Queer women (including lesbian, bisexual, and transgender women) are at increased risk for economic insecurity when compared to the straight-identified male and female population. Even when certain members of our community are doing well financially, it’s certainly not indicative of broad-strokes changes. A 2014 Gallup poll concluded less than three out of ten LGBT women were thriving financially compared to 39 percent of straight women. Queer women are also more likely to be living in poverty than other queer people or straight people (according to one report, nearly one in three bisexual women ages eighteen to forty-four live in poverty, and one in five LGBT women living alone live in poverty). Queer women of color, older queer women, and queer women raising children are particularly vulnerable to these realities.

This data is all reflective of an elaborate patchwork of conscious and unconscious discrimination: standard-gender wage gap, racism, xenophobia, and a lack of federal employee protections for LGBTQ Americans, among others. But for companies and corporations, this data simply translates as an insecure customer base.

It’s not financially strategic to invest money into courting people who don’t have a disposable income, and because so many exclusively queer spaces also operate as businesses in a capitalist framework, it’s precarious to count on those lower-income people as consistent customers—particularly to sustain an entire business. As more Americans have come out and being queer has become less and less stigmatized for certain individuals, that doesn’t directly mean that queer women will have money to spend on cocktails and ladies’ nights. That’s because our earning power is hindered by a slew of other institutionalized factors, and our lack of ability to spend money the way that gay cis men do, the way that straight cis women do, the way that straight couples do, doesn’t incentivize businesses to consider marketing to us. And it’s because we are not desirable customers that we have less power. Such is capitalism.

A recurring perception of queer and lesbian-identified women in the United States is that we don’t buy anything.

Even if you factor in queer-owned businesses, our power is slight. Forget corporations. Of the 28 million small businesses in the United States, less than one thousand were certified LGBT Business Enterprises in 2016, meaning that the business was at least 51 percent owned or managed by a queer citizen. And most of those businesses were owned by gay men. A mere 30 percent were lesbian owned, while less than three percent were bi or trans owned, respectively. Our lack of capital is one of the reasons behind why, in addition to so many lesbian establishments shuttering, queer women’s digital spaces have shut down too. When AfterEllen.com, considered “a staple of the queer-female online community,” ceased regular publication in 2016, Strapagiel reported for BuzzFeed News that the lack of advertisers attributed greatly to the website’s demise. (AfterEllen.com would become a shell of its former self-publishing far fewer articles a day and from non-staffed authors with no unified tonality or voice.)

Sarah Warn, the founder, told the publication that she was pursuing advertisers for the brand in addition to other sites. Identifying customers was key and queer men were preferred over queer women, despite the efforts of the team: “The Logo [the company that owned AfterEllen.com until 2014] reps consistently tried to sell to both gay men and lesbians, but advertisers almost always only wanted to market their products to gay men.” Then editor in chief Trish Bendix shared in a statement that the manager, Emrah Kovacoglu, of their new parent company, Evolve, gave the news to her over the phone. “He said, ‘We can’t find the money for the LGBT sites, we want to put our efforts into growing the moms’ and fashion space where the money is.’” In a separate statement, Kovacoglu also confirmed that they didn’t have “enough advertiser support to justify continuing to invest at the same levels,” but clarified that the site would remain accessible with content from “freelancers and contributors.”

The end of AfterEllen.com was mourned across the queer internet, as the conversations and comments often mimicked the funereal narrative that now laces around the shuttering of lesbian bars: I met my first girlfriend there. That’s where I first started going after I came out. I loved it there. But where readers had found community, affirmation, and a unified lens within which to share culture, advertisers had failed to find customers, and it’s by that metric that AfterEllen.com ceased to exist as it had.

These are the limits of the economic landscape as we have currently envisioned them: if queer women don’t have any money, how are we supposed to create “visibility”? How are we supposed to find each other? How do we influence culture and politics without platforms of our own?

Some activists, both past and present, find the answers to these questions to be severely limited by capitalism—and so they eschew it within their organizing. They aren’t trying to shoehorn their beliefs into an economic platform that not only disadvantages them from the start, but could also shift with wherever business interests travel, leaving their tactics vulnerable.

Dyke March, a protest for queer women’s rights and visibility that began in 1993 in Washington, D.C., has rejected corporate sponsorship, even as queer rights have become more corporate-endorsed through Pride parades. To this day, Dyke March NYC doesn’t seek a permit to demonstrate because the march is focused on disruption, rather than a parade.

“The Dyke March is about dykes,” Marlene Colburn, a “founding mother” of Dyke March told me about the organization’s enduring decision to not seek corporate sponsors. “It is about being visible in a society that seeks to erase us and it’s being visible on our terms,” she elaborated, alluding to additional politics, demands, or stipulations that often come with taking corporate money. “I doubt that a corporate entity would want to sponsor us. And if one did we would say ‘Fuck no. We don’t need or want your [money].’”

Dyke March, a protest for queer women’s rights and visibility that began in 1993 in Washington, D.C., has rejected corporate sponsorship, even as queer rights have become more corporate-endorsed through Pride parades.

The original Dyke March in Washington, D.C., was organized by the New York Lesbian Avengers in 1993. The team arranged for promotional materials (approximately eight thousand fliers) and marshals to oversee the route all the way to the White House. A reported twenty thousand self-identified “dykes” showed up and continued to march to the National Mall. That same year, the New York Lesbian Avengers organized the first NYC Dyke March, echoing similar themes of grassroots assembling and affirmation of the First Amendment right to protest. San Francisco and Atlanta also held their first Dyke Marches in 1993.

That this terrain has endured for Dyke March is reflective of the queer cultural environment in which the initial marches were organized. “The Dyke March committee was formed before corporate sponsorships for Pride came into being. But I don’t think we’ll be going down that road at any time,” Colburn says. “We don’t monitor or police other Dyke Marches around the world (and there are many), but I don’t think there are many, if any, of them sitting around with their hands out begging for corporate sponsorship.” She clarifies that Dyke March doesn’t identify directly as anti-capitalist, and the organizers do not represent a unified social justice strategy. “I know that we come together so that those who march feel safe, empowered, and enlightened every year,” she adds. Dyke March accepts donations on their website and through “money honeys,” marshal volunteers who collect money from participants in garbage bags or pillowcases. So far, this method of fundraising has sustained Dyke March for over twenty years in New York City, and there are as of this writing no strategies to change.

But a lack of explicit corporate endorsement has proved to be a strength for the protest, as marchers describe Dyke March as “inclusive” and more about community rather than alcohol and money. This divide, understandably, plays out very amply among queers who have money and those who don’t. Wealth has proven to be a very stark divide in our community as some white cis queer men manage to both get richer and achieve some semblance of cultural acceptance at more or less the same rate. For the rest of us, wealth will continue to evade us, so why should it be the benchmark for us having our rights protected? Being visible? And being together?

Having attended many a Dyke March and a couple of Pride parades in New York, the ripple effect to me has always been clear. When you remove purchasing and brands as the rallying factor, more people can come. The lens is widened.

Evoking the powerful dynamics of radical queer history, Colburn says, “I think accepting corporate sponsorships for protests is not the right thing for us. The Stonewall Rebellion would not have come into being if they waited around for corporations to kick in some [money] for glitz. They bought their own glitz and so does the NYC Dyke March.” 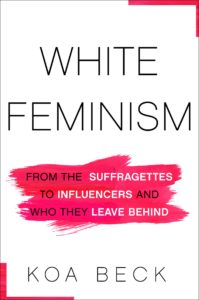 From White Feminism: From the Suffragettes to Influencers and Who They Leave Behind by Koa Beck. Used with the permission of Atria Books. Copyright © 2020 by Koa Beck.

Koa Beck is the former editor-in-chief of Jezebel. Previously, she was the executive editor at Vogue and cohost of "The #MeToo Memos" on WNYC's The Takeaway. Her writing has appeared in The Atlantic, The New York Observer, The Guardian, and Esquire, among others. For her reporting prowess, she has been interviewed by the BBC and has appeared on many panels about gender and identity at the Harvard Kennedy School at Harvard University, the Metropolitan Museum of Art, the Brooklyn Historical Society, and Columbia Journalism School to name a few. She lives in Los Angeles.

A House in the Mountains by Caroline Moorehead, Read by Derek Perkins 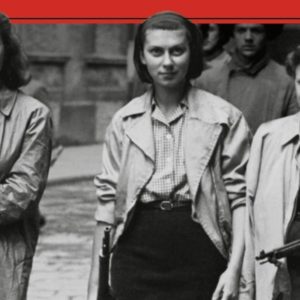 A House in the Mountains by Caroline Moorehead, Read by Derek Perkins