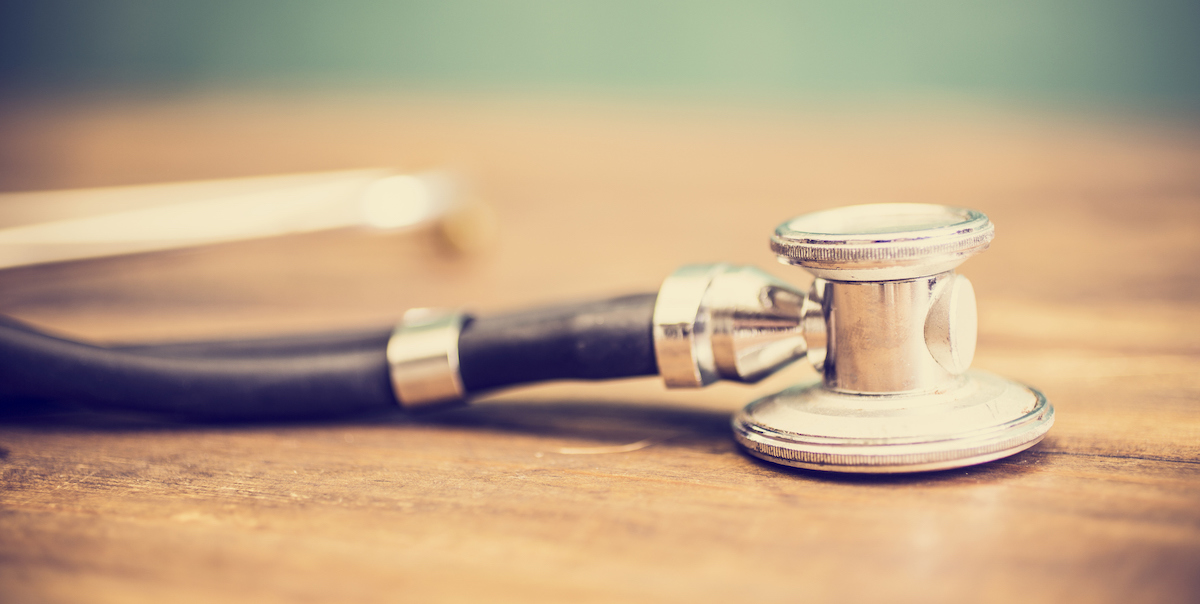 Why Do Doctors Discredit Women’s Pain?

On Fibromyalgia and Discovering You're Not the Only One

The following scene is unfolding in an office in your town every day, perhaps right now at this very moment:

Jane Doe crosses her ankles in the waiting room, absently turning the pages of People magazine. She looks around often—now at the oversize clock, now at the receptionist, now at the generic watercolors on the walls.

“Ms. Doe,” a flat voice calls out. “Dr. Bowels will see you now. Second door on the left.”

Jane takes a seat in the doctor’s office, regarding the diplomas on the wall. On the desk stands a life-size replica of the human intestinal tract. When Dr. Bowels bustles in, he introduces himself as he looks over her chart for what is clearly the first time.

The interaction begins very seriously, a furious scribbling of notes, a furrowing of the brow, a lot of nodding. The usual diseases are ruled out and Jane confirms she has been tested, twice, for everything under the sun. Her primary symptoms are severe constipation, distention, and pain in the lower left quadrant of her abdomen. As the doctor pages through her thick medical file, Jane takes the opportunity to share some of the stranger nonbowel symptoms she has experienced—aching in the bones, fatigue, itching, unexplained gynecologic symptoms, memory  problems,  lower  back  pain— but the words are scarcely out of her mouth before she wishes she had kept her addenda to herself. She can see the red flags rising behind his eyes, and the note taking slowly tapers off. Before she knows it, where once Sherlock Holmes scribbled furiously, hot on the trail, bent on solving her mystery—he now leans back in his swivel chair, tip of his pen in the corner of his mouth, checking his watch. His look is saturated with understanding, for he has solved the case.

It is considered an indulgence to assess the patient’s personal and emotional landscape.

Six years went by before I was aware of the proverbial Jane Doe.

And again,  I come from a family of excellent doctors. My mother, my father, my stepfather—even my grandmother was a famous endocrinologist. I am the absolute last person who should have walked off a medical cliff without so much as a Wile E. Coyote deadpan to the camera.

But this is how it always begins. The appointment with Dr. Bowels will likely be followed by a similar experience with Dr. Vulva, only to be repeated with Dr. Rheuma, who sends her on to Dr. Uro, and then Dr. Neuro, followed by Dr. Thyro, then possibly Dr. Chiro, and finally cycling back to Dr. Bowels. Since no lightbulbs have gone off over anyone’s head, off she goes to Dr. Freud.

This long and expensive chain of events is not only common for this type of patient—it is the norm.

Now, it is well known that modern medicine all but requires doctors to think in algorithms.

That is, they think of the patient as a set of mathematical variables: X + Y = Z.

They look for the common signs and symptoms (X), corroborate it with evidence from the laboratory (Y), and, based on the symptoms and the evidence (X + Y), conclude that the patient has a disease (Z). Straightforward, effective, efficient—it is the baseline of medical training.

This modern method doesn’t waste valuable time or money with hand-holding, and it certainly does not encourage the patient to think of herself as a unique and special snowflake. No time for the fuzzy-wuzzies. The problem here is that Fuzzy-Wuzzy has come to include anything time-consuming at all, such as taking a full patient history. Fifteen minutes—which is now the average amount of time a doctor spends with her patient—aren’t enough minutes to take a history of someone in the full bloom of health, let alone a very sick person, or a real survey of diet, exercise, sleep, and self-care regimens. It is considered an indulgence to assess the patient’s personal and emotional landscape—especially with extras like empathy and a sense of connection or concern. A quick diagnosis and prescription is more expedient, and though this mechanical approach is not as artful as it could be—it gets the job done of seeing twenty or even thirty patients in a day, which many doctors have to do if they want to make a living and participate with insurance companies. Algorithmic thinking has become necessary just to keep the job.

If so many doctors were independently questioning my psychological composure, perhaps there was something to it.

Now, me personally, I’d prefer a large-hearted genius to take care of me—an empath and a mystic—a poet, a painter, a juggler, and a wonderful joke teller. I’d pay extra to hire out the mathematicians and statisticians to look at my lab numbers. But that’s just me, and I won’t impose my personal proclivities. It’s not really the root of the problem anyway.

The real root problem here, regarding the women with mysterious illnesses, is this:

The algorithm is wrong.

There is a special suite of real and debilitating symptoms—you will hear me incant them over and over again to impress the point— that have mistakenly come to be seen as the telltale signs of a woman who can’t cope with the pressures of real life.

Just mentioning these symptoms can induce a total eclipse in the physician’s mind of the original complaint. Before she knows it, Jane is being rotated out of the office (not without a stop at the billing counter), into the elevator, down to the lobby, and out onto the street—blinking in the morning light with nothing but a referral to a gynecologist and a script for Paxil.

When I find myself describing the above scenario to a gathering of women, it surprises even me to see an entire room of vigorously nodding heads.

For a concrete example, let’s look at one of the classic mysterious illnesses, fibromyalgia. Also called fibromyalgia syndrome, or FMS, fibromyalgia is a syndrome whose chief symptoms include severe aching and pain in the joints and muscles, accompanied by pronounced fatigue and difficulty sleeping. No one definitively knows what causes fibromyalgia—it has been classified, then unclassified, and then classified again (and then unclassified) as an autoimmune disease—and there is great debate as to the actual, underlying pathology. But based on the symptoms alone, the best research estimates that at least one in fifty Americans has it, which is at least seven million people. And with small numbers at the NIH and the Mayo Clinic generating papers and studies routinely since the 1990s, fibromyalgia should be considered a real disease beyond any shadow of a doubt. I myself was extremely relieved to find out that there might be a name for the intense pain in my own joints and muscles—a set of symptoms that had always bewildered my doctors. It was also quite a comfort to finally discover a community of six million people describing aspects of my exact same physical experience that had never been explained before.

Imagine then my surprise when all of my top-ranked doctors, one by one, with great professional sobriety, sat me down and cautioned me to stop telling people I had fibromyalgia.

Fibromyalgia, they explained, is just code for Crazy.

For years, I thought Jane Doe’s situation was unique to me. My own repeated disappointment at doctor after doctor, and all because my disease was either too weird, or too unimportant. It wasn’t exactly chronic fatigue syndrome (a bit too gastric, and much too pelvic), but it didn’t appear to be any of the known gastroenterological or gynecologic diseases either. It was also monumentally more painful than anyone could explain. The diagnosis of fibromyalgia had been swept under the rug to preserve my credibility, and repeated colonoscopies and biopsies revealed it wasn’t a known inflammatory bowel disease like ulcerative colitis or Crohn’s.

Despite a truckload of symptoms, it appeared I had nothing at all.

And so maybe, since so many doctors seemed to quietly think so, it was hard not to start to think it was a simple matter of depression after all. How could they all be wrong? Never mind that antidepressants made me more depressed when I tried them. Never mind having built an all-around wholesome life despite my debilitating illness. And never mind my winning disposition and famously positive thoughts. If so many doctors were independently questioning my psychological composure, perhaps there was something to it.

I was just starting to believe this when I met my first WOMI. Her name was Charlotte.

We were brought together by our respective boyfriends at the time, and we sat for an afternoon at her small kitchen table. Piece by piece she unfolded before me the patchwork story of her own mysterious illness. As I listened I went absolutely pale, looking at her as I would a secret twin, separated from me at birth, reunited at last. Her story was so familiar—eerily familiar. I had never heard myself described to myself before. The mortal exhaustion. The urinary nightmare. The distended belly. The disaster in the pelvis. The distinct feeling of being eighty years old, despite being officially twenty-five. I could not believe I had met someone so identically strange.

But then it wasn’t very long afterward that I met Naomi, a friend of my brother’s, who regaled me with the story of her own mysterious illness over the telephone. A Silicon Valley mogul, Naomi had become sick with a virus when she was thirty-two, immediately became bedridden, hidden away from society for years, unable to digest anything, allergic to most of her pantry, aching all over, and prescribed enough Valium to sedate a rhinoceros.

And as she spoke, I thought:

What incredible fortune that I would meet the only two others in the whole wide world forsaken with the same wretched curse.

But then of course I would soon come to meet Courtney and then Alexandra and Skye and Christina—followed by Gwen and then Greta and then Mara and then Jones—who all, to my everlessening surprise, recounted almost the exact same story as my own. Varying types of related-sounding illnesses, and varying levels of severity—but undeniably variations on a very distinct theme—over and over again, almost the exact same story of the misdiagnoses, the medications, the disbelief, the rabbit hole, the Caterpillar, the Hatter, and the Hare.

And every single one of them thought they were the only one.

After about twenty of these identical conversations, the pen on my desk stirred to life and a book began to write itself.

From The Lady’s Handbook for Her Mysterious Illness by Sarah Ramey, published March 17th by Doubleday, an imprint of the Knopf Doubleday Publishing Group, a division of Penguin Random House, LLC. Copyright © 2020 by Sarah Ramey.

Sarah Ramey, author of The Lady’s Handbook for Her Mysterious Illness, is a writer and musician (known as Wolf Larsen) living in Washington, DC. She graduated from Bowdoin College in 2003, received an MFA in creative nonfiction writing from Columbia in 2007, and worked on President Obama’s 2008 campaign. 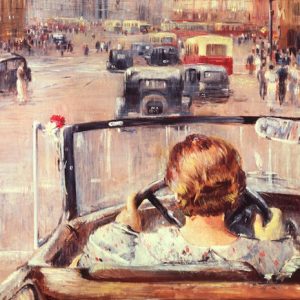 My grandmother Tamara was a month shy of 80. She lounged on the velvet sofa in a frayed velvet robe, a pair of bifocals perched...
© LitHub
Back to top
Loading Comments...