The Martello tower on the coast south of Dublin, where stately plump Buck Mulligan begins Ulysses, receives thousands of visitors each year, filled as it is today with Joycean paraphernalia and the recreation of a contemporaneous apartment set on the second floor. This stout, cylindrical fort built in the early 1800s to keep Napoleon at bay once served as Joyce’s home for all of six days before he set off for the Continent in 1904.

But this part of Dublin is just as famous for its local sea swimmers as it is for its Joycean heritage. From the top of the Martello, one has a perfect vantage of Ireland’s most famous swimming spot. The Forty Foot, an enclosed yellow-granite nook which keeps deep waters at all tides, became popular in the mid 19th century as the rise in “taking to waters,” a Victorian fashion, spread through Ireland.

Ireland was still part of the British Empire; the Victorian prudishness that grew alongside the pursuit of sea-bathing was a perfect bedfellow for Ireland’s increasingly puritanical Catholicism. So when Buck Mulligan was bathing here along with Stephen Dedalus (read James Joyce and Oliver Joseph St. John Gogarty), the Forty Foot was a “Men Only” swimming spot. And while George Bernard Shaw and Beckett would likely have swam in the very same spot, an avid swimmer like Iris Murdoch, Dublin born, would not have been permitted. Instead, she and her sex would have been sent around the corner to Sandycove.

Women remained disbarred from the Forty Foot till the 1970s. Even then, entry had to be reclaimed by brave women who endured verbal abuse and intimidation paving the way for others. A wealth of priests, bishops and the easily offended regulated these and other swimming holes along Ireland’s coastline.

By the time I started bussing out to the Forty Foot in the late 1990s with my teenage friends to throw myself of the top rock on a sunny day, women were thankfully a common sight. When I set off on a journey last summer to record the histories, cultures and images of Ireland’s sea-bathing community, only the place names spelled out the erstwhile gender segregation: Nun’s Cove, Ladies Beach, the Men’s Jump. 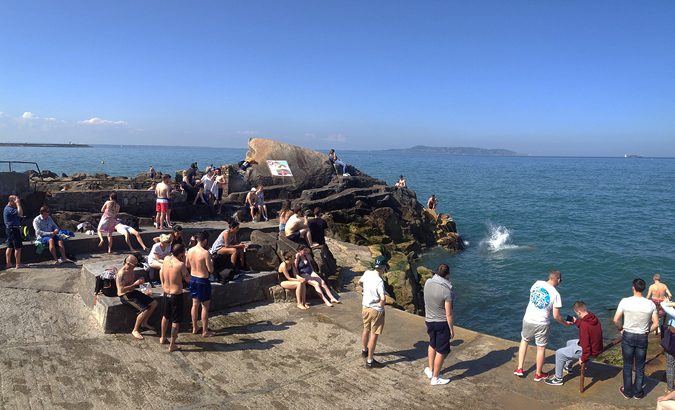 During the summer months, hundreds, sometimes thousands of people descend on the Forty Foot. Ireland is situated at the same latitude as Labrador City, Newfoundland, but is warmed by the Gulf Stream. Sea temperatures range from 16°C in August to 5°C in February.

The range for land temperatures is much wider. Last week, the thermometers hit the infrequently reached milestone of 30°C—considered extreme weather in Ireland. Met Éireann, Ireland’s meteorological institute, even issued a weather warning. It didn’t stop thousands of sweating citizens from packing into cars and buses which overwhelmed the narrow coast roads leading to Dublin’s numerous sea swimming spots. For Dublin is a capital city on the sea with a long, distinguished and growing sea-swimming tradition.

As large as the crowds are during a “heatwave,” they’re even larger again on Christmas Day. A growing Christmas tradition, the mid-morning swim, is swiftly replacing morning mass for many Irish people, young and old, who prefer to join their goose-pimpled, semi-nude citizens into the screaming cold sea rather than endure the droning monotony of the clergy.

It was to the James Joyce Tower just above the Forty Foot that Flann O’Brien (aka Brien O’Nolan) and Patrick Kavanagh made their pilgrimage for the first celebration of Bloomsday, 50 years to the day on which Joyce set his epic tale. Filmed by the publican John Ryan who joined them, O’Nolan can be seen stumbling into horse and cart, and pissing the remainder of his talent into the Irish Sea.

Although O’Brien didn’t take a dip to sober up, or to cure his hangover, as is more commonly done in Ireland nowadays, he did show a particular interest in the sea. Four kilometers further south along the Dublin coastline near the town of Dalkey is another famous swimming spot on the Vico Road. Today it’s a hangout for Dublin’s naturist swimming contingent, but in O’Brien’s day the Dalkey Archive had the fictional scientist-cum-philosopher De Selby in conversation with St. Augustine in a hidden sea cave below the waterline.

And the Ulysses connection runs the length of Dublin’s coastline. Stephen Dedalus walks the southern coastline toward Dublin city with ashplant in hand. Bloom wanks off in the dunes of Sandymount Strand and later, Molly Bloom recalls Howth Head where she first said “yes” among the wild rhododendrons overlooking the Irish Sea, the same place where Yeats lived for three years and failed to woo the revolutionary Maude Gonne. 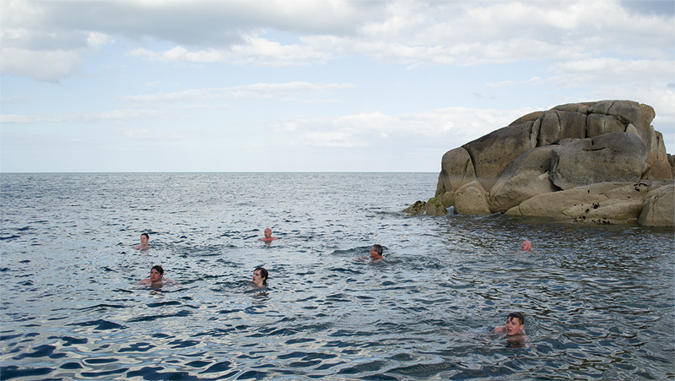 Can the Irish writer not escape the sea? Or is it an inevitable aspect of the literature of the small island nation? Irish language speakers like Tomás O Crohan and Peig Sayers, whose stories were recorded as part of a process of national lore collection around the time of the Gaelic revival, lived on the Great Blasket Islands off the coast of Kerry. They recalled rowing in currachs to the mainland to sell goods, the mackerel and lobster fishing carried out at sea from light canoes, as well as seal baiting expeditions and basking shark hunting. The seal meat was eaten, skins sold to gentlefolk and the oil from both seals and sharks extracted from their livers and used to fuel oil lamps long before the western islands had electricity. O Crohan recounts with Hemingwayesque romance the beaching of a shark “that lit the island for the next four years.” Irish literature and the sea continued to cross paths into the post-modern era: Iris Murdoch’s novel The Sea, The Sea and John Banville’s The Sea both took the Man Booker Prize.

My own desire to write, sparked in my late teens was matched by an increasing desire to be near or in the sea. Of a loose afternoon, if I was looking for a way to procrastinate from penning a short story, or schoolwork, then the places that Joyce and Flann O’Brien mention in their writing were never more than a bus or cycle away. Sometimes I would slip into the water like a prayer slips from the mouth, and other times I would enter like a profanity. The sharp and joyful shock of cold water overwhelming the senses distracts the mind from its pointless ruminations that ebb and flow through the mind like the tide. For these few minutes I am guaranteed peace of mind.

I became greedy to find more swimming spots; and I needed a larger project to distract me from writing the idea for a novel that had been swimming in my mind for years. So last summer, I set off on a jolly with a fellow swimming enthusiast and friend Michael O’Reilly. We traversed the shoreline of Ireland, from Dublin to Donegal, over the course of one summer—at swim, two birds.

The result was part-guidebook, part-travelogue, part-analysis of our relationship with the sea, searching for the best place to swim along Ireland’s coastline, finding out about Ireland’s various and varied sea-swimming communities and the places where they decide to enter the sea. 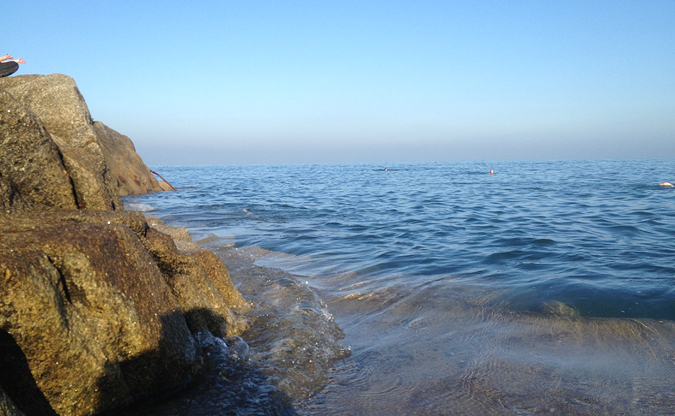 On my travels I met novelist and short story writer Kevin Barry, also a keen sea swimmer, who has lately written Beatlebone, the Goldsmith Prize-winning novel based on John Lennon’s desire to finally visit the small island he bought years ago off the coast of County Mayo.

“The seaside, it’s great for stirring up memories,” says Kevin, “childhood stuff and family stuff that you always return to. When you’re in that memorious place it’s going to stir up material.”

Kevin had spoken before about the reverbs and atmosphere that certain places secrete. So what about Rosses Point, the place Kevin had chosen for our swim?

“You’d always think of Yeats, who was into taking tinctures of cannabis, which you could get then in the chemist in Sligo. He used to be down here, stoned, rolling around the beach at midnight. So you have to think of Willie when you’re here.”

Another writer I met along the way was Kevin Curran, for whom the sea is more than just a place to swim. “Being in the sea, you get a sense of openness. The ocean gives you space to think, to fill with your own thoughts. When you’re in, on a beautiful day, you want to enjoy it. It gives you a sense of time and space; an unlimited horizon.”

And Kevin, like myself, is partial to an evening swim. “There’s something spiritual about it. You get that otherworldly feeling.” Curran is currently working on his third novel, based loosely on the life of local fisherman in the town where he lives, Skerries. The title: At Sea.

At the West Cork Literary Festival, I read from my book At Swim to a crowd of literature and swimming enthusiasts, then we walked together as a group from the local library down to the shore where we stripped off and entered the sea beneath an old Abbey outside the town. As we lounged around in the water, I got chatting to two women who swim daily in a place just six kilometers away in a small townland named Snave, or Snámh in Gaelic. The British had changed it from Snámh to the incomprehensible Snave in the 19th century during a nationwide process of anglicizing by phonetics. The literal translation of Snámh, of course, is “Swim.”

Brendan Mac Evilly ’s writing has appeared in The Irish Times, The Guardian, The Sunday Business Post, The Stinging Fly, The Honest Ulsterman, and We Are Dublin among others. He works as a freelance arts manager and runs www.creativecareers.ie, a jobs website for the creative sector. His book At Swim: A Book About the Sea is published by Collins Press.
http://www.creativecareers.ie 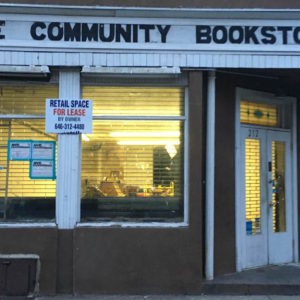 The “rest in peace, beloved bookstore” personal essay is by now so well worn that the genre may merit its own eulogy....
© LitHub
Back to top
Loading Comments...