Which Assassins Take the Deadliest Aim? We Aggregate, You Decide

Critics—those heartless pathologists of Great Art—are not unlike the Devil, or perhaps Dracula, in the sense that they can appear in many guises in order to seduce or eviscerate their vulnerable prey. Every discipline has its anointed wielders of the poison pen, cold-blooded ink slingers with the power to make or break the reputations of those bars, films, books or albums brave or foolish enough to exist. And though it may be petty, and cruel, and transparently motivated by schadenfreude, who amongst us doesn’t enjoy reading a good hatchet job from time to time?

That admission in mind, in honor of Food Day at Lit Hub, we thought we’d take a side-by-side look at the best of the worst take-downs—from Pete Well’s death-by-a-thousand-questions disemboweling of Guy Fieri’s American Kitchen & Bar to Christianity Today’s bible-thumping sermon on the satanic siren’s call that is Harry Potter and the Sorcerer’s Stone.

Which assassins, culinary or literary, take the deadliest aim? We aggregate, you decide.

“Is the entire restaurant a very expensive piece of conceptual art? Is the shapeless, structureless baked alaska that droops and slumps and collapses while you eat it, or don’t eat it, supposed to be a representation in sugar and eggs of the experience of going insane?”

“Think of everything that’s great about fried chicken. Now take it all away. In its place, right between dried-out strands of gray meat and a shell of fried bread crumbs, imagine a gummy white paste about a quarter-inch deep. This unidentifiable paste coats your mouth until you can’t perceive textures or flavors. It is like edible Novocain.”

“’I feel like I’m in a cafeteria,’ a companion says on a recent weeknight on the second floor, where a flock of ceramic birds floats above our heads. (I would envy them their freedom, but they’re just as stuck here as we are.) The din and strangely stale air lend credence to the sentiment. Shouldn’t a restaurant as vast as this one smell like some cooking is going on? If the nose isn’t exactly assaulted, the ears certainly are. On any given night, the sound equivalents in the dining room fall between that of a garbage disposal and a passing diesel truck”

“One of the curiosities of this week’s restaurant – along with ‘How do they live with themselves?’ and ‘Why isn’t there a baying mob outside with pitchforks and burning torches?’ – is that it should be named after a deity whose followers are famed for their serenity and yet should be capable of engendering in me such a blind, raging, spittle-flecked fury. There will be casualties in the restaurant trade as a result of the current economic turmoil; I sincerely hope London’s Buddha Bar is one of them.”

“Montana’s Trail House is a very bad place. Its rottenness is both inherent and cosmetic; it is culinarily insipid and morally insidious. It’s bad to the last splinter of its Kentucky wood. Parceling off generic objections to the ridiculous fantasia Bushwick has become, there is a deeply toxic relationship with history and with America embodied at Montana’s Trail House.”

A. Gill on L’Ami Louis

“Nothing I have eaten or heard of being eaten here prepared me for the arrival of the veal kidneys en brochette. Somehow the heat had welded them together into a gray, suppurating renal brick. It could be the result of an accident involving rat babies in a nuclear reactor. They don’t taste as nice as they sound.”

“Abracadabra isn’t so much a restaurant as a random sequence of events. I could describe it as bad – and believe me, the food is, in a very special way – but that really doesn’t do the experience justice.

“Spoiled mussels and stale salmon were only two flaws at a lunch that included many. A mountain of soupy fettuccine with cream and ham tasted like a packaged macaroni-and-cheese dinner and a shrimp dish arrived in a lobster sauce that could have been achieved with canned lobster bisque. When we complained of slow service, an unshaven captain said: ‘Well, madame, if you knew how to order properly from a captain instead of from waiters, perhaps you would get things promptly.’”

“In his new memoir, The Discomfort Zone, Mr. Franzen turns his unforgiving eye on himself and succeeds in giving us an odious self-portrait of the artist as a young jackass: petulant, pompous, obsessive, selfish and overwhelmingly self-absorbed.”

“As Amis’s class mockery curdles, we’re left with a misanthropic vision of human suffering compounded by venality and lust. The novel’s meandering middle section has the grating tone of an episode of The Beverly Hillbillies sketched on the back of an envelope by England’s finest stylist.”

A. Gill on The Autobiography of Morrissey

“What is surprising is that any publisher would want to publish the book, not because it is any worse than a lot of other pop memoirs, but because Morrissey is plainly the most ornery, cantankerous, entitled, whingeing, self-martyred human being who ever drew breath. And those are just his good qualities.”

“I fear I am being very rough on Mr. Clegg’s novel, rougher than I would like to be. But the pocket where I generally put the nice things I want to say about a book is, in this instance, pretty empty.”

“One is struck here, not just by the implied disregard for the free speech of other writers who might not qualify for ‘the quality defense,’ but also by the lordly nonchalance with which Rushdie places himself alongside Lawrence, Joyce, and Nabokov in the ranks of literary merit. Throughout this memoir, Rushdie claims kinship with any number of great literary men—men who, like him, suffered for their genius, but whose fame was destined to outlast that of their oppressors.”

“The writing is as bad as Brown’s admirers have come to expect: imagine Coke gone flat. Characters come with occupational tags, since they’re only memorable as the plot’s functionaries. They converse with a lack of idiomatic verve that would embarrass an automaton.”

“How a human being could have attempted such a book as the present without committing suicide before he had finished a dozen chapters, is a mystery. It is a compound of vulgar depravity and unnatural horrors.”

“Lolita, then, is undeniably news in the world of books. Unfortunately, it is bad news. There are two equally serious reasons why it isn’t worth any adult reader’s attention. The first is that it is dull, dull, dull in a pretentious, florid and archly fatuous fashion. The second is that it is repulsive.”  –Orville Prescott

“An oxymoronic combination of the tough and tender, Of Mice and Men will appeal to sentimental cynics, cynical sentimentalists… Readers less easily thrown off their trolley will still prefer Hans Andersen.”

“Mr. Scott Fitzgerald deserves a good shaking. Here is an unmistakable talent unashamed of making itself a motley to the view. The Great Gatsby is an absurd story, whether considered as romance, melodrama, or plain record of New York high life.”   –L.P Hartley

“This Salinger, he’s a short story guy. And he knows how to write about kids. This book though, it’s too long. Gets kind of monotonous. And he should’ve cut out a lot about these jerks and all that crumby school. They depress me.”   –James Stern

Christianity Today‘s 2000 review of Harry Potter and the Sorcerer’s Stone by J.K. Rowling

“Regardless of how magic is portrayed in the series, we need to remember that witchcraft in real life can and does lead to death—the forever and ever kind.” 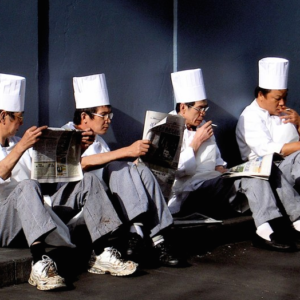 What Do Chefs Read? King Phojanakong, Kuma Inn What are your five favorite books? Art of War by  Sun Tzu; Don Quijote by Miguel Cervantes; Dogeaters by Jessica...
© LitHub
Back to top