Whoever Said Platonic Love Can’t Be Sexy? (Hint: Not Plato)

Michele Morano on the Geometry of the Love Triangle

According to Robert Sternberg, the psychology researcher who developed the triangle theory of love, this emotion works the way colors do. The triangle’s three points are intimacy, passion, and commitment, and its sides represent their combinations, so just as yellow mixed with red makes orange, intimacy and passion make romance. Just as red mixed with blue makes purple, intimacy and commitment make companionable love. And just as blue mixed with yellow makes green, commitment and passion make foolish love.

I don’t mean to oversimplify. There are shades and nuances to love, the emotional equivalents of periwinkle and burnt umber, along with additional triangles that map the real and the ideal, the past and the future, the feelings and the behaviors they spark. But it’s the sparks themselves that interest me most, the winks and compliments, the moist palms, the constant, low-grade pleasure of attraction.

Ben Bishop was a retired art professor who owned the house I shared with one man during the time I was seeing a second. The second man knew about the first, but not the other way around, and Ben Bishop knew about everything but didn’t mention it. We talked instead of our work, our travels. I had recently moved back to New York State from a year in Spain, which interested Ben because he’d once spent a summer with a woman in Málaga. The way his voice softened as he said this, eyebrows wrinkling above black-framed glasses, told me it had been an unspeakable time, happy and sad, thrilling and dangerous. We became fast friends.

In restaurants I noticed others noticing us, Ben’s white hair and mustache, my unwrinkled skin, our cocktails and laughter. And how could I fault their conclusions? We were dating, Ben and me, all through that fall and into the winter, a period of brilliant colors fading to shadows and light.

Ben lived at the end of a long driveway, in a ramshackle house filled with riches. He’d been a painter all his life, until macular degeneration began to erase detail. Now he sculpted in a workshop off the living room, where tables and shelves held large clay images. A life-sized hawk spread its wings, each feather responding to the wind. A curious child bent over a patch of grass. A three-foot-high bull with angular muscles and fearsome genitalia stood guard.

We’d agree to meet at his place at six, and from the moment I hung up the phone, the day shimmered.

I lived next door, in a blue house with pink shutters. It was a fairy-tale house, backed into a steep, wooded hillside, with many small rooms and a set of stairs so narrow we had to sidestep up and down. The man I lived with had moved into the house while I was in Spain, as he finished the master’s degree program where we’d met. Now, unable to find work in the Hudson Valley, he commuted to Long Island during the week and returned home each weekend.

In contrast, I kept to a small local radius. Twice a week I drove over the mountain to teach classes at the university, a nine-mile route both beautiful and harrowing. On the other days I stayed at home, writing in a closet-sized room overlooking the stream out front.

On my home days Ben sometimes called in the late afternoon, his voice gruff with the day’s silence: “Got anything in your fridge, sweetheart?” He might have leftover lasagna and three oranges, to which I’d add the makings of a salad and a bottle of wine. We’d agree to meet at his place at six, and from the moment I hung up the phone, the day shimmered. Loneliness evaporated, buoyancy took over. The last hour of work was the most productive of all.

The walls of Ben’s house were crowded with paintings, charcoal drawings, pencil and ink sketches. Most were gifts from friends around the world, artists who lived by their talents and gave plenty away. On each visit, Ben and I chatted through the rooms, the studio with its cool clay scent, the living room with layers of handmade rugs, the kitchen bursting with color: yellow walls, red cabinets, exposed pipes painted blue and green.

Everywhere I looked were images worth lingering in front of, and Ben was always happy to lead a tour. In the dining room we talked about the shading of a portrait at eye level; on the stairway we leaned against the railing, admiring the work of a collage artist. Upstairs in Ben’s bedroom, shelves beside the window held abstract rosewood sculptures so smooth I couldn’t help touching them. Mosquito netting curtained the unmade bed, as if we lived in Zanzibar.

Before dinner we’d have two, maybe three martinis, then switch to whatever wine I’d brought, and later there would be a nightcap of brandy or cognac, more than I could drink in an evening before or since. Ben’s gruff exterior softened with each pour, though he never seemed drunk and I never felt that way. I felt charged up, connected to something I couldn’t name. Ben asked questions and listened to the answers, both of us musing about books and movies and why people act the way they do. After we’d washed and dried the dishes and divided the leftovers, he’d walk me to the door and say, “That was a good time, sweetheart. Let’s do it again.”

The walk home, from the reach of Ben’s porch light through darkness to the reach of my porch light, felt magical. Partly it was the drinks and the way Ben conversed as if my life experience were on par with his, but mostly it was the studio, the walls, the sculptures and paintings and sketches, the intimacy of all that expression.

This was years before researchers at the University of London learned that looking at an appealing work of art stimulates the same areas of the brain as having a crush on a person, years before I began to understand why I’d oat home from Ben’s house feeling dizzy in love. I’d make a cup of tea and wrap in a blanket, then sit on the porch and look at the stars. Even when the temperature fell below freezing, I wanted to be out in the world, inhaling deeply, enjoying all that craving.

Ben and I saw little of each other on weekends. Most Saturday evenings I went to the movies with the man who was back from Long Island or we hosted dinner parties for friends who barreled over the mountain with guitars and baklava. He did most of the cooking, and I lit candles, poured wine, washed dishes between courses because we didn’t have enough plates. He called me “Sweetie” and rubbed my back, just as he always had, and the candles, the music, the lively conversation squeezed around a table in the living room made my heart race.

Some weekends Ben visited his girlfriend, also a retired teacher, in Brooklyn, or they traveled together to Taos or Marin County, or sometimes she came up and they hosted their own parties. I liked her and she seemed to like me, just as Ben liked the man I lived with. Sunday afternoon might find us all chatting in the driveway, noting how fast or slow the stream was running, how hunting season was about to start and good luck to our deer, but beyond that, we didn’t socialize.

Then when everyone else was gone and the workweek underway, Ben would call and ask what was in my fridge. If the answer was not much, we’d take his car, with me driving so he could have an extra drink, and head into town. We weren’t sneaking. We weren’t keeping it a secret. But we liked to be alone together, to feel the energy around our table, to bask in the pleasure of connection.

Ben and I didn’t talk about ideas, at least not in the outward, philosophizing way of Plato, but there were anecdotes that worked like allegories, stories that made us go still. Narrowed eyes, a slight nod, and we each existed in two places at once: in the restaurant and in some corner of memory shadowed by beauty or truth or pain. Or maybe we existed in three places, because the past is always connected to the future, especially when the future is uncertain. We came together and stepped apart, over and over again, our dates always ending before we ran out of things to say.

Love is the in-between, the back-and-forth, the translator, the ferryman. Love is the fulcrum on which the teeter-totter rests, the enabler of stomach-churning, mind-spinning excitement, as well as the excitement itself, as well as the ever-present danger of falling to the ground. Must we expect it to be moral, too? 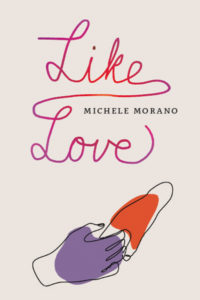 Excerpt from Michele Morano’s Like Love, used by permission of Mad Creek Books, an imprint of The Ohio State University Press.

Michele Morano is the author of the travel memoir Grammar Lessons: Translating a Life in Spain. Her essays and short fiction have appeared in many journals and anthologies, including Best American Essays, Fourth Genre, Ninth Letter, and Waveform: Twenty-First-Century Essays by Women. She lives in Chicago, where she chairs the English Department at DePaul University. 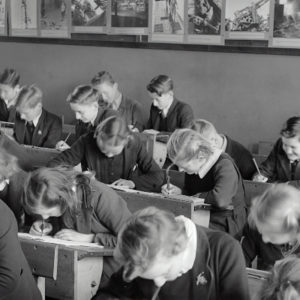