Given the participation of New York and Chicago in this year’s National League Championship Series, there is perhaps a bit more interest in baseball among non-fans than is usually the case; and just to the north, an entire country has now become baseball obsessed. Also, Kansas. As a literary website, it fell to us to do the obvious: come up with all-star writer teams representing major league baseball’s four remaining cities.*

Even more die of heartbreak.

Despite a clubhouse riddled with tension and drama, this collection of egos has managed to make it this far. Capable of scoring in bunches.

1. Nelson Algren (right field): Come on, this is the man with the golden arm. Go ahead, test it.

2. Jennifer Egan (center field): This five-tool player is deep into analytics and once gave manager Terkel a power-point presentation on why she should bat second.

3. Sherwood Anderson (first base): Dependable if not flashy; a calming influence on a team that can sometimes have clubhouse issues (see hitters 4 and 5, below).

4. Saul Bellow (pitcher) Has just two pitches, but is in total control of his stuff; accused of being aloof, but his talent makes up for it.

5. Ernest Hemingway (third base): The original Big Papi sometimes resents the fact his job in the order is to protect Bellow; quick to fight.

6. Dave Eggers (second base): Takes a lot of swings, but can occasionally connect with terrific power. You shall know him by the velocity of his double play pivot.

8. George Saunders (catcher): His mound conferences are notoriously off-beat and entertaining; once got Bellow to smile. Occasionally predictable in his pitch-calling.

9. Patti Smith (left field): Let’s face it, this legitimate two-sport star is going to retire as a Yankee.

This isn’t the lineup you’d get if you went strictly by the numbers, but sometimes you have to go with your gut when putting together a team. A lot of hall of famers here.

2. James Baldwin (second base): Perhaps the best pure hitter in this amazing line-up; unrivaled intensity on and off the field.

3. Herman Melville (right field): Despite his unorthodox stance, when he connects, it goes deep.

4. Edith Wharton (first base): If you hang one on Edith, she’ll go yard, every time (though she hates slang). A real baseball traditionalist, she occasionally gets into it with Sontag.

6. Susan Sontag (pitcher): Incredible natural talent, best change-up in the game; her arrogance can be an asset in tight situations.

7. Dorothy Parker (short stop): Not afraid to go in spike’s up; quick with the leather.

8. Norman Mailer (catcher): Carries the tools of ignorance with pride; fiercely loyal, beloved of his teammates.

9. J.D. Salinger (third base): Never quite lived up to the promise of his rookie season; can disappear for stretches, but still has great talent.

Can’t quite rival the talent up and down the previous two lineups, but can boast a couple of all-time greats at their respective positions.

1. Sheila Heti (second base): How should a baseball player be? Patient, deceptively fast, gets on base

2. Malcolm Gladwell (center field): Covers a lot of ground in the field, can sometimes be guilty of overthinking the count.

3. Margaret Atwood (catcher): One of the best pure hitters in the game, mean as hell at homeplate if you take any liberties.

4. Alice Munro (right field): Effortless power, great arm: just when you think you have a stand-up double she guns you down at second; decades later, catching a reflection of your aging face in a train window, you ask yourself, How did she do that?

5. Michael Ondaatje (first base): Not as quick as he once was but remains a run-generating machine. Quiet clubhouse leader.

7. Robertson Davies (third base): Not the player he once was, but remains surprisingly effective.

9. Christian Bök (pitcher): The league has introduced three new rules to contend with Bök’s innovations on the mound; has all kinds of crazy junk he’ll throw at you.

Northrop Frye (manager): A precise, systematic manager, Frye can sometimes be guilty of slotting his players into pre-existing types.

Thomas Frank, aka, “The Baffler,” is no stranger to controversy.

A real throwback team, some of these unheralded ballplayers still hold down jobs in the offseason. Baseball loves an underdog, right?

2. Calvin Trillin (first base): Trillin is one in a long line of quality ballplayers who’ve bounced between KC and NYC.

3. Robert A. Heinlen (right field): This switch-hitter refuses to speak with Frank, over on the left.

4. Evan S. Connell (third base): Little-known beyond the Kansas City faithful, this hometown hero is a prototypical power hitter.

5. Edgar Lee Masters (pitcher): Little-known beyond the Kan– oh, wait. One of the hardest working players in the league, Masters brings a tremendous amount of versatility to his work on the mound.

6. Ben Lerner (second base): This phenom was recently voted to his first all-star game. Earned the nickname “10:04” because of his fine post-season play.

7. Michael McClure (center field): When in the zone, he let’s nothing through the gap (in which zone=stoned).

8. Joe Posnanski (catcher): You can’t really be named “Joe Posnanski” and not play catcher. Might actually read and appreciate the entire gimmicky conceit of this “article.”

9. Truman Capote (short stop/player-manager): Like Trillin, known more for his time in New York, though played perhaps the best baseball of his career during his brief stint in Kansas.

PREDICTION: Kansas City just doesn’t have the talent to pull this out; Toronto in five.

*Some writers were born in their team’s city and moved; others were born elsewhere and found a home in their adopted city. If you want to complain about the validity of a given player in the lineup, please note this is all made-up and imaginary.

Jane Smiley: "At the End of This Trilogy, I Wept." 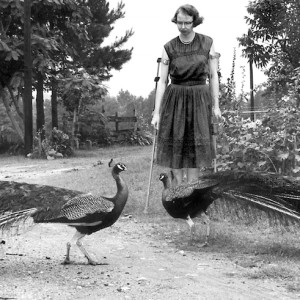 The peacocks of Andalusia have had a brutal year. At the beginning of 2015 the aviary at the Milledgeville, Georgia dairy...
© LitHub
Back to top
Loading Comments...