Jane Smiley: “At the End of This Trilogy, I Wept.”

In the 1980s, I came close to writing a trilogy—it was The Greenlanders, and I composed it on a Kaypro “portable” computer that was the size and weight of a sewing machine. Everything I had written before, I had written on a typewriter, so the bottom of a page (taking it out, finding another piece of paper, rolling it in) reminded me of the bookiness of typewritten manuscripts, meaning page turning, chapter ending, part one, part two, book marks, putting something on a shelf and taking it down again. The Kaypro only scrolled, and as a result, I just kept writing, until eventually, I ran out of that section of the story, sat back and wondered what was next. Writing became very much about contemplating the relentless passage of time, occasionally interrupted by retrospection or plans for the future. The Greenlanders was some 284,000 words long, and broke itself into three volumes. They were called “Riches”, “The Devil”, and “Love”.

Undoubtedly I owed a great deal of inspiration for The Greenlanders to actual trilogies, one by Ole Rolvaag, of which we read the first volume, Giants in the Earth, in ninth grade, and Kristin Lavransdatter, by Sigrid Undset, which I read part of while in Iceland on a Fulbright and the rest just after I returned. Another book I read in Iceland was Halldor Laxness’s Independent People, which was not a trilogy, but Laxness had written a tetralogy, World Light. It was evident to me, steeped in Scandinavian literature, that multivolumes were a natural, and almost irresistable form, not one I was familiar with through Dickens, Eliot, Austen, and Woolf (I had taken some guilty pleasure in Arnold Bennett’s Clayhanger series, aware though I was that Bloomsbury disdained it). Perhaps the disagreement between the Bloomsbury-ites and their precursors boiled down to this—Victorian writers always knew that more could be said (and would be paid for); Bloomsbury believed that more should not be said—only the best bits should go on the page, and the rest should be invoked.

The trilogy is a malleable concept that normally grows through its own energy—one book leads to another; eventually the concept is exhausted and the result is three or four books or more. Readers do not mind this at all—that there are three Hunger Games novels, six Palliser novels, twenty Rougon-Macquart novels and twelve novels and twenty stories about Miss Marple is fine with readers, but to critics and some authors these series present a sort of formlessness that lacks both art and thought. Except that Shakespeare did it, didn’t he? Not only Henry VI, parts 1, 2, and 3, but all of the other more or less related history plays.

When I began The Last Hundred Years, time was my subject. Since I am 66 and my husband is 73, the way time expands and contracts as we look through collections of old pictures, talk about our childhoods or those of our offspring, remember historical events or places where we worked or played, and marvel that celebrities we admired when we were children have now died at 88 years old, time interests me even more than it once did. Time marches on, but it doesn’t seem to. It seems to ebb and flow, stop, disappear, swell up. Each day passes slowly and yet it is already Thursday again—I always feel amazed at the arrival of Thursday. Why Thursday and not Wednesday or Saturday I have no idea.

I knew from the moment of conception that I wanted each of my last hundred years to be equal—no special claims for romance or tragedy or historic significance, and so I found myself writing a trilogy for absolutely bookishly practical reasons. The Last Hundred Years is about 475,000 words. The paperback edition of The Greenlanders (at least, the UK edition) weighs two pounds; The Last Hundred Years would weigh almost four. A novel is not a reference work—we like a novel, we want to carry it around with us, read it here and there, keep it close. A four-pound novel is unfriendly, burdensome. And so, like The Greenlanders, The Last Hundred Years scrolls forward, and so it fell into three parts and became a trilogy.

Trilogies share some artistic challenges. One of them is that a trilogy cannot be as hermetically sealed as a novel. We enter a novel by a single expositional door and exit out the denouement, but readers expect to be able to pick up the volumes in a series and enjoy them without reading those that come before or come after. In the 1980s, I read David Lodge’s Changing Places (volume 1) because I had already enjoyed Small World (volume 2) The first volume read second ideally works like a flashback might in a novel, adding to my understanding and enjoyment of both, but in volume 2, there have to be subtly placed introductions to the characters and lightly drawn explanations and memories of events from volume 1 so that the reader won’t give up in confusion. One way of doing this is to have the volumes address different themes. In Lodge’s trilogy (volume three is Nice Work), volume one explores the cultural differences between a dying industrial city in the north of England (Rummidge) and a wild university town on the American west coast (Euphoria) and the experiences of two professors go on a year’s exchange. Volume two steps back and surveys the changing academic landscape of the 1980s. Volume 3 pivots away from the concerns of established academics and focuses on a female professor and the relationship between the university and the business community of Rummidge. Major characters in one book make cameo appearances in the others, but theme and place are the drivers. Many ambitious trilogies and series follow this model, including Anthony Trollope’s Palliser and Barchestershire series, Balzac’s La Comédie Humaine series.

Vilhelm Moberg’s trilogy The Emigrants (followed by a final, shorter retrospective volume, The Last Letter Home,) concerns place, but is ordered by time. A family’s farm fails in Sweden in volume one, so they immigrate to the US. In volume two, they begin their US journey in New York City and end up in Minnesota territory. In volume three, they establish their farm in the forbidding wilds of Minnesota and contend with various family conflicts, but also hustlers, cheaters, and fools. Moberg’s 1,200 pages allows him to explore the process in detail, giving the reader the illusion of accompanying his characters on their journey. I think what we readers of multivolume series love the most is that sense of immersion, that sense of friendship and intimacy with characters who age and develop right before our eyes, or so it seems.

It is worth noting that each volume of Moberg’s trilogy is longer than the previous one. The same is true of The Greenlanders. Characters and their concerns proliferate. Any author who is not Emile Zola must fear losing control, meaning the original organizational principles that inspired the work. Moberg and I let the third volumes expand and, I think, put things a little out of balance. For David Lodge, the longest volume is volume 2, Small World. Changing Places is the shortest and Nice Work is in between. As a result, Lodge’s trilogy as a whole has a neatly rounded quality, the signifier (ha!) of an author aware and in charge. It wasn’t until I was wrestling with volumes two and three of The Last Hundred Years that I appreciated the subtle expertise of Lodge’s model. I had too many children growing up—a literary population explosion. I had to pick and choose—send some of the characters out of the narrative, to focus on my theme and my theory, to become something like an orchestra conductor who gestures to the soloists and the prevents the chorus from slowing things down.

The hardest part? Killing them off. Since The Greenlanders is about the collapse of a civilization (well, a settlement at the edge of the known world, small but possessed of some four centuries of history), and The Last Hundred Years lasts a hundred years, statistically and plausibly, characters have to go. The authors of the Norse Sagas solved his problem by saying, “Now he is dead and out of this saga.” Modern readers prefer some pathos, a bit of mourning, a few memories, and some indications of that character’s significance. It is our attachment to characters that expands a trilogy, that gives the author that feeling of heartlessness as she or he finally limits and curtails our access to them.

When I finished The Greenlanders, it was the summer solstice, and I felt both euphioria and momentum. The next day, I went back to The Age of Grief, giving my characters the inner lives that my Greenlanders had not been allowed to have. At the end of The Last Hundred Years, I wept, and not only because I was depressed by the fates of my characters and their world, so similar to ours. I was exhausted by the effort of making up such a long narrative. I was also attached to them and sorry to see them go, a response I hadn’t felt with earlier novels, however much I liked them. But I had lived with my characters for five years, pondering them everyday (and sometimes in the night, though I have a rule to prevent this, no writing after four in the afternoon). The only possible response, it turned out, was the Zola response—imagine something else, put pen to paper, or fingers to keyboard.

Jane Smiley is the author of numerous novels, including A Thousand Acres, which was awarded the Pulitzer Prize, and most recently, Some Luck, Early Warning, and Golden Age, which make up the of The Last Hundred Years trilogy. She is also the author of five works of nonfiction and a series of books for young adults. A member of the American Academy of Arts and Letters, she has also received the PEN USA Lifetime Achievement Award for Literature. 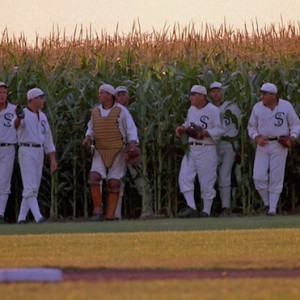 Given the participation of New York and Chicago in this year's National League Championship Series, there is perhaps a bit more...
© LitHub
Back to top