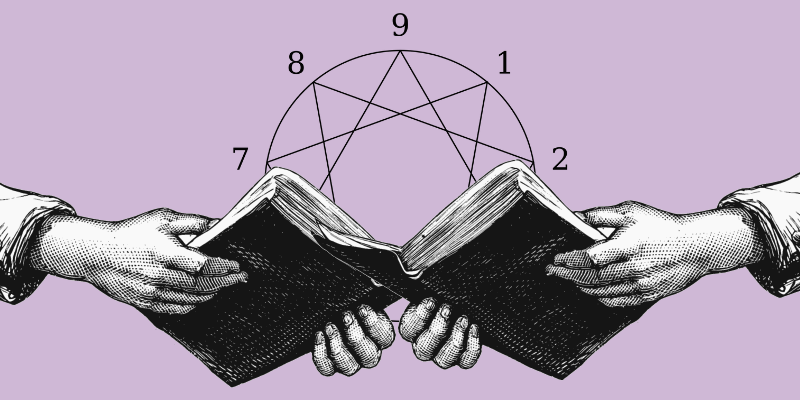 Ah, the Enneagram. It’s the lesser-known but (in my humble opinion) far superior personality test. Unlike the Meyers-Briggs, which honestly offers different verdicts based on your mood and which I’m told you “should” re-take from time to time, the Enneagram result is supposed to stay with you for your entire life. It says something about the ~core~ of your being. And also,  it’s a lot of fun. At the very least, it’s a good way to procrastinate whatever you’re avoiding right now. Have at it.

Because I’m a classic 2 (The Helper), I thought I’d make this even more fun for you by adding a ~literary~ aspect. After years of obsessing over the Enneagram and making everyone I know take it, I now give you the Enneagram personality types as fictional characters.

Sometimes The Reformer is also called the Idealist. This means that you have strong principles, and you stick to them. You live your life above board. You pride yourself on your intelligence, responsibility, and virtue. (And you likely have younger siblings, right?) Being a Reformer means that you’re a lot like the beloved heroine of Pride and Prejudice, Elizabeth Bennet, quick of wit and pure of heart! You have high standards and hope (read: expect) that everyone around you can meet them. Which is a good thing, as long as you don’t judge others too harshly. (Turn down any Darcy’s lately? Maybe you want to give them a second chance? Eh? Eh?)

A reader after my own heart. You, The Helper, are admirably selfless! You genuinely care about other people. You nurture others with your generous spirit. You’re quite like Middlemarch‘s heroine, Dorothea Brooke, a young woman who ambles through life with the strong desire to help others. Sure, she marries a terrible out-of-touch academic (with the dream of assisting him with research for his book!) and there are a few bumpy, people-pleasing moments in George Eliot’s masterpiece, but surely this beautiful last line of the novel resonates with you: “But the effect of her being on those around her was incalculably diffusive: for the growing good of the world is partly dependent on unhistoric acts; and that things are not so ill with you and me as they might have been is half owing to the number who lived faithfully a hidden life, and rest in unvisited tombs.”

As the Achiever, you are nothing if not driven. You keep your eye on the prize. You were probably told you were “gifted and talented” in grade school. Who could blame you for wanting to advance in life? You’re smart and focused and truly charming. Sometimes, you get a little competitive and caught up with what other people think of you, but at your best, you are authentic and inspiring, and your go-getter attitude makes you the perfect role model, much like the titular character in Muriel Spark’s The Prime of Miss Jean Brodie, a teacher whose mentorship of a group of young girls goes horribly awry. Keep being your best self—just don’t use your influence to convince others to live out your fantasies for you, you cunning puppet master!

The Individualist is also referred to as The Artist. At your best, you find yourself drawn to creative pursuits. At your worst, you can be a little temperamental and moody. (Did I see you around the campus of my small liberal arts college?) You want to surround yourself with beauty. You have a lot of feelings about your Life’s Purpose. As the name suggests, you want to spotlight your ~individuality~ whenever possible. Perhaps this is why you relate to the star of Oscar Wilde’s The Picture of Dorian Gray, a patron of the arts and a man who wants his life to be transcendent. As long as you don’t put your soul inside a painting with the promise of immortality, it’s really fun to dance to the beat of your own drum.

As The Investigator, you’ve probably already deduced that Sherlock Holmes would be the pick for your personality type. This is because you’ve got an agile mind, a keen sense of awareness of the world around you. You don’t like unanswered questions. Much like Arthur Conan Doyle’s iconic fictional detective, you are incredibly cerebral, an independent thinker. (You probably solved A Study in Scarlet before everyone else, right?) As a child, you were probably annoyingly curious about everything. You can be a little intense at times, but truthfully, you just want to feel useful. Say, have you considered a career in detective-work?

The name says it all. You’re as loyal as they come! A true friend to the end. You’re a person of your word, and you carry the courage of your conviction. Like Hamlet‘s Horatio, you are committed, reliable, and incredibly trust-worthy. You connect well with others. (When you see the ghost, we believe there’s a ghost is what I’m saying.) Admittedly, sometimes you’re a little defensive (yes, you are!), fretful, overly anxious. But you keep your wits about you and your good qualities keep you alive to tell the tale. Also, you can be indecisive. In the spirit of this personality type, I went back and forth on this one. You are also Samwise Gamgee, another beloved faithful friend.

So you’re The Enthusiast!!! (Am I using enough exclamation points here?) You embrace the world with open arms. You’re fun-loving and wild. You live for the adventure. (And honestly you can be a little messy and all over the place at times.) Who better emulates that than Don Quixote‘s knight-errant of the same name, a character set on creating his own story? Yes, there may be some moments when your imagination gets the better of you. (Fight any windmills lately?) But in the long run, your imagination and lust for life takes you exactly where you need to go.

Hello, Challenger! You are confident, self-assured, and resourceful. You like to be in control because you’re decisive. You know what you want, which is an admirable quality. In times of personal strength, these things make you a born leader. You know exactly who you are. You don’t need people telling you who you are! Especially not phonies. You might have even scrolled to this point and disagreed vehemently that you’re anything like The Catcher in the Rye‘s narrator. Classic Challenger.

9. The Peacemaker → The Lorax

Bless you, Peacemaker! You just want everybody to get along. As a person, you sort of go with the flow. You are trusting and stable—the rock of your friend group. You create harmony in your environment, which makes you an awful lot like the guardian angel of nature in Dr. Seuss’ The Lorax. The only problem is that sometimes your tendency to avoid conflict means you get bulldozed over, which is exactly what happened to the creature who speaks for the trees. You are a vital part of this ecosystem, Peacemaker. Trust yourself and speak up!